@DevyMatt dives into one of the best wide receiver prospects in the 2022 rookie class. 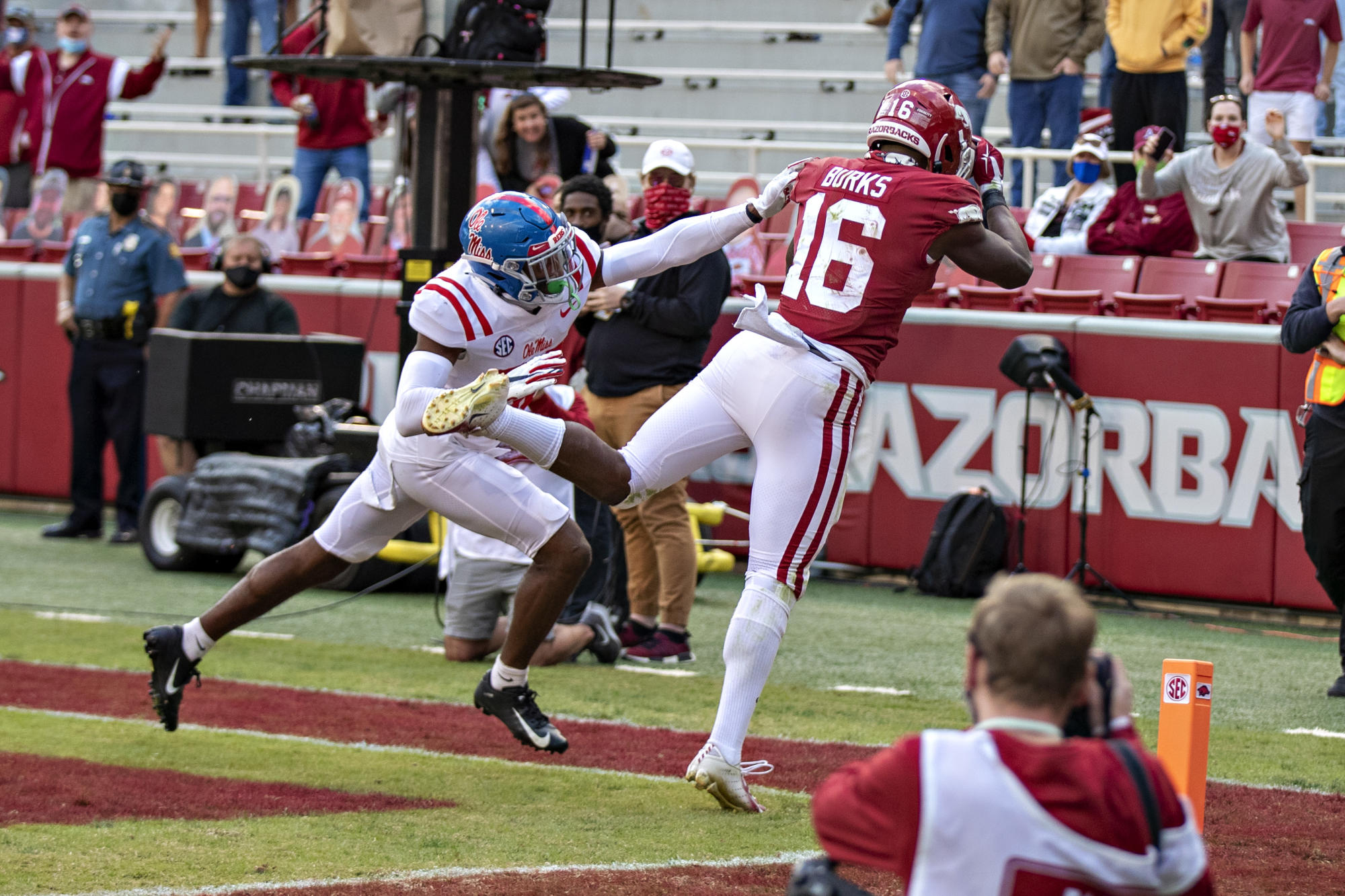 One of the fastest risers in the devy community over the course of the 2020 college football season and offseason has been Arkansas wide receiver, Treylon Burks. Burks has gone from a prospect not many were talking about, to a consensus top 5 devy receiver in the span of a year. So why the change? In this article, we will dive into what makes Burks an elite receiver.

Burks came to the Razorbacks as a 4-star recruit and the 16th ranked wide receiver in his class. He garnered offers from ten schools, the most notable being Clemson, LSU, and Oklahoma, before deciding to join the Razorback program.

Burks played a hybrid role in high school, racking in 1,090 yards and 12 TDS through the air, while also rushing the ball for 936 yards and 27, yes, 27 rushing touchdowns. Burks has gone from a seemingly hybrid RB/WR in high school, to a bonafide big play monster receiver in his first few seasons in Arkansas.

Standing at 6’3” and weighing in at 225 pounds, Burks has all the makings of a true X receiver. With the transfers this offseason of Trey Knox and Mike Woods, Burks has a wide-open opportunity to have an explosive statistical season. Let’s dive into his film and see what makes him such a devy darling.

You would be hard-pressed to watch the film on Burks and not notice the physicality he brings to the table. He is strong at the catch point and continues this strength through the process of the catch. His blend of size and speed makes him too fast to cover by linebackers and too strong for opposing corners to match up against him. Take a look at this clip below where he shows off this physicality.

I mentioned the size that Burks brings to the table, but what makes him a mismatch nightmare is the size and speed combination he has. At 6’3 and 225 pounds, Burks moves likes he’s 190 pounds showing consistent ability to get behind the defense. Take a look at this clip below showing just that.

Here’s another clip of Burks getting behind one of the nation’s top defenses in Georgia.

What sets Treylon Burks apart from other receivers in the nation his is hands. He has some of the strongest hands in college football and is consistently catching whatever is thrown his way. With a catch rate of nearly 77%, he is one of the most secure pass-catchers in college football today. Take a look at this clip below showing Burks’ strong hands.

Here is another clip of Burks showing off his strong hands.

While there is a lot to like about Burks, he does have some areas in his game that I would like to see him improve on. The biggest one that jumps out on tape is a tendency to round off his routes. If he can improve on sinking his hips, selling his breaks a little better, and being crisper at the top of his routes, the sky’s the limit for his NFL potential with that rare blend of size and speed.  Take a look at this clip showing a little of what I am talking about.

At the current moment, Treylon Burks is being valued as a top 5 devy receiver. With a current ADP of 12 overall, the stock on Burks is already hot. Even at this value, Burks is a buy for me in devy. I firmly believe with the transfers in Knox and Woods, that Burks can have an even bigger season than he had in 2020, not to mention he will have a full non-Covid season to do it in.

In a day and age where a true X-receiver is hard to find, Treylon Burks should be the one guy that you go out and actively try and acquire before the price gets even higher.

This concludes my first of many devy breakdowns. Be sure to follow me on Twitter @DevyMatt as well as checking out my Patreon page at www.patreon.com/devydatabase for more devy analysis.