With the conclusion of week 10 of college football many players are cementing themselves as top levy prospects. One in particular that is becoming a hot name is BYU’s Zach Wilson. Lets dive in to figure out what makes him so great. 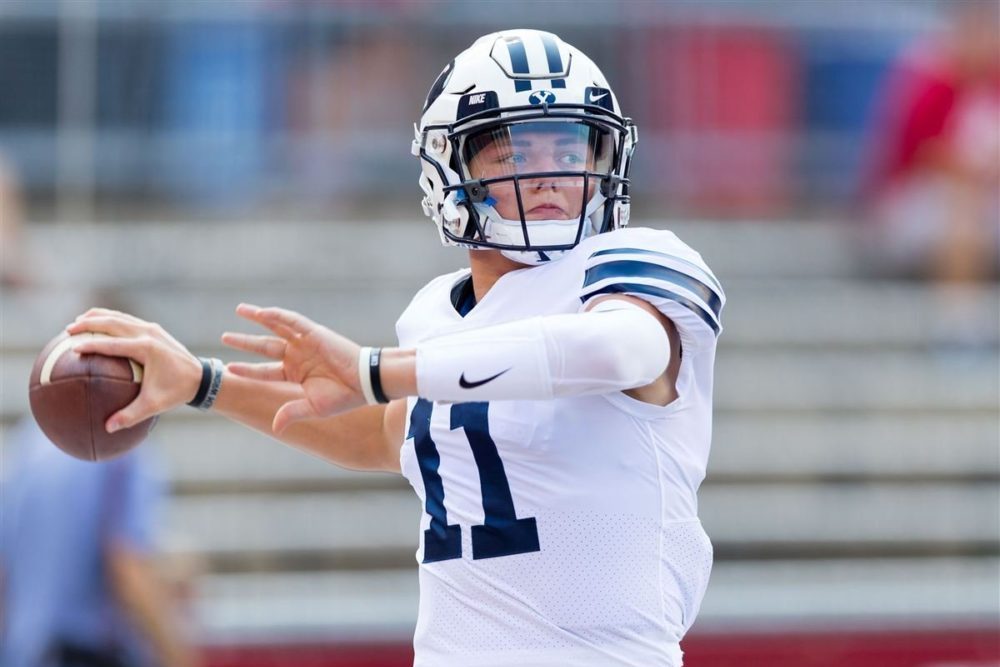 With the conclusion of Week 10 in college football, several players in the devy landscape are beginning to firmly cement their spot among the country’s best. Undoubtedly some of the greatest rises in devy stock this season has been at the Quarterback position. One of the Quarterbacks beginning to gain a lot of steam in the community is BYU’s Zach Wilson. Due, in no small part, to the time that BYU plays its game, Zach Wilson has been someone flying under the radar compared to several other big-name SEC and BIG 10 signal-callers. So what makes Wilson so special? Let’s dive in and discuss why Wilson should be a guy you should be targeting across your leagues next year.

Zach Wilson is a 6’3” 210-pound prospect out of Draper, Utah. Wilson was not an overly touted prospect, only garnishing three stars, and was the #38 rated pro-style quarterback in his class according to 247 sports. He only received offers from 14 schools, with teams like Minnesota, Iowa, and California topping the list. After originally committing to Boise State, Wilson later de-committed and decided to stay close to home, bringing his talents to the Cougars roster.

Zach Wilson is having the best statistical season of his career thus far. As you can see from the chart below from sports-reference.com, Wilson has seen a massive rise in both completion percentage, adjusted yards per attempt, as well as his overall TD/INT ratio.

Up until a few weeks ago, Wilson had the highest overall completion percentage in the FBS. However, these stats do not tell the whole picture of Zach Wilson’s journey in collegiate football. At this time last year, Wilson was an afterthought in the college football landscape. He finished his 2019 season with just over 2000 passing yards, a 62% completion percentage, and nearly as many interceptions as he had touchdowns.

So what happened between 2019 and 2020? First and foremost, Wilson is healthy. He played most of 2019 with a thumb and shoulder injury, which was undoubtedly why we observe such a difference in his statistics. On top of this, BYU’s coaches have raved about the work that Wilson has put in this offseason, saying he has put in hours of his own time to improve his strength, weight, and mechanics, while also deep-diving into the film room during rehab to improve on his mistakes from 2019. All of this work has translated into phenomenal play on the field. So let’s take a look and some of the film and see what makes Wilson so good.

The first thing that sticks out when watching Zach Wilson is his accuracy. As previously mentioned, Wilson is one of the most accurate passers in all of college football this season. Wilson throws a beautiful deep ball and has phenomenal ball placement. Check out the video below where Wilson hits his receiver in stride, putting the ball where only his receiver can catch it.

Another week, another Zach Wilson dime. He's worked his way into the Top-5 QBs for the 2021 NFL Draft at this point. Such a fun player. Great throw outside the numbers here. Nice placement. pic.twitter.com/Q7KnwcdKcK

Another impressive aspect of Zach Wilson’s game is his ability to feel pressure, move up in the pocket, and put the ball on target while on the run. Check out this video below of him doing just that. While his receiver did not catch the ball, Wilson showed off his pocket awareness, sliding up in the pocket to avoid pressure, as well as his accuracy and arm strength, putting the ball on target, 50 yards downfield while throwing off of one foot.

Here’s another video of Wilson showing off not only his pocket awareness and mobility but his accuracy to hit his receiver down the field while throwing off-platform.

One of the more underrated aspects of Zach Wilson’s game is his rushing ability. Thus far this season, Wilson has 170 rushing yards and 7 rushing touchdowns. This ties him for first place in rushing touchdowns, with Virginia Tech’s Hendon Hooker and Texas’s Sam Ehlinger. Through the 2020 season, Wilson has shown that he can be just as dangerous with his legs as he can with his arm. Wilson looks elusive in open space and is not afraid to use every bit of that 210-pound frame to take the hits to linebackers and defensive backs. Check out this clip of Wilson showcasing his rushing upside and looking elusive in open space on his way to a massive gain.

Zach Wilson has made huge strides from his 2019 season to his 2020 season. He has improved in every statistical category and is making a serious case for being a first-round pick come NFL Draft time. His ability to escape pressure by moving up in the pocket, his accuracy, and his throw on the run ability are just a few of the areas of Zach Wilsons game that he does at a phenomenal level. Due to his subpar 2019 season, Wilson is likely not owned in a majority of your devy leagues. Start doing what you can now to acquire early-round devy picks in your upcoming drafts. Wilson is the real deal and is somebody you need to have on your radar and your devy roster.

Make sure you subscribe to the #NerdHerd, where you get exclusive content, dynasty/rookie rankings, buy/sell tool, and a bonus podcast too. DynastyNerds also recently launched the #DynastyGM tool, which is a complete game-changer in the fantasy industry. Click here for a free trial. We truly are your one-stop-shop for all your fantasy football needs! Make sure to follow me on twitter at DHH_Matt for more devy content.