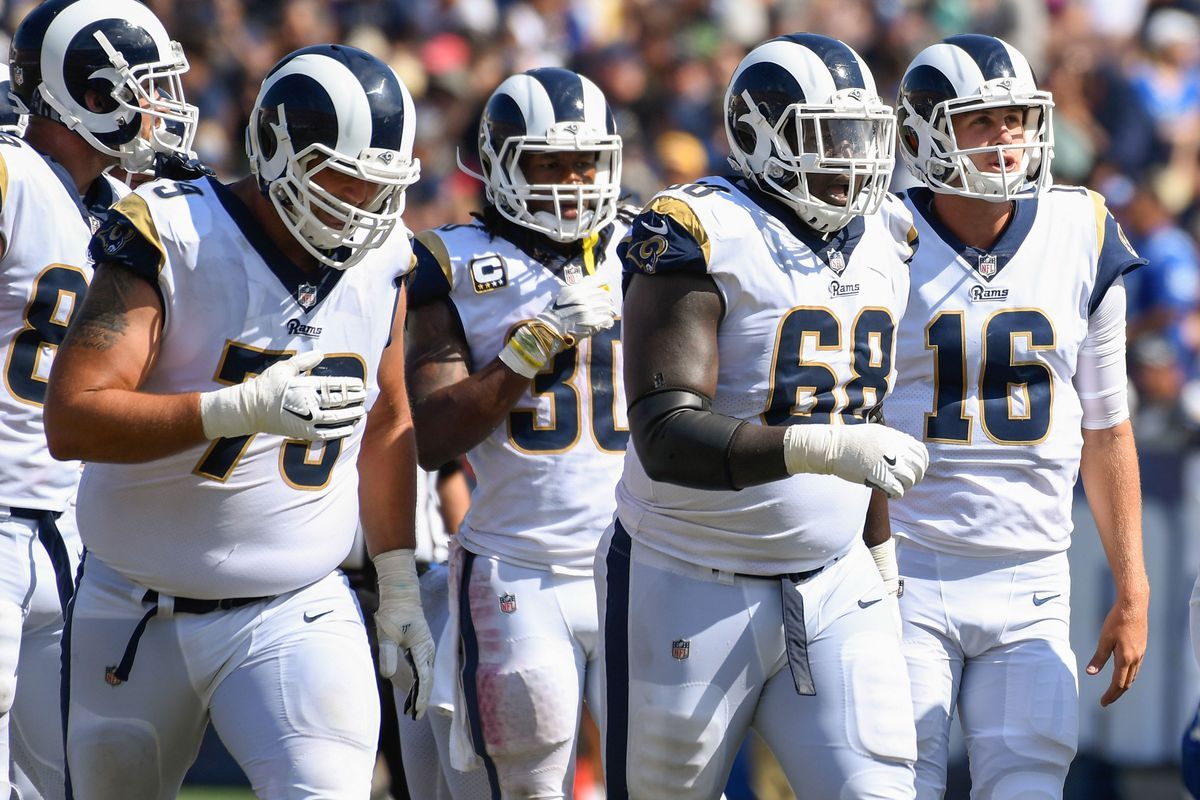 My early favorite for the best offensive line is the LA Rams. The Rams are led by left tackle (LT), Andrew Whitworth. According to PFF, Whitworth was the third best LT in 2018. Rob Havenstein bookends the opposite tackle spot and graded out as the 7th best right tackle (RT). The Rams got lucky and Austin Blythe produced a career year. Blythe will look to build on his 2018 success, where he finished as a top 12 right guard (RG). This all shall bode well for Todd Gurley even if he receives fewer touches due to arthritis in his knee. This also makes me want to target Darrell Henderson in rookie drafts. He may only receive 5-10 touches per game, but with his efficiency and running behind this great line, Henderson will make the most of his opportunities. If he falls to the second round, draft him.

The Eagles come in a close second for me. This group is led by the league’s best center, Jason Kelce. Brandon Brooks is a top ten RG, while Lane Johnson is a top 12 RT. Rookie Miles Sanders and newly acquired Jordan Howard will battle for touches.  In my opinion, Sanders is the much more talented back, with a more rounded skill set. Before long I would expect Sanders to have this backfield to himself. Sanders is my target at the four spot in rookie drafts and should have an immediate impact for your fantasy team. This team is stacked on the right, and whatever RB carries the ball, should have an easier time rushing right.

David Bakhtiari continues elite play for the third straight year and was the top-rated left tackle (LT). Corey Linsey a top-six player at Center, and solid veteran Bryan Bulaga at RT round out a solid front three. The Packers are however a bit weak at the guard spots, so running between the tackles may not be successful. This team has been a frustrating committee between Aaron Jones and Jamaal Williams. If healthy, I believe this is the year Jones breaks-out. Newly anointed head coach Matt LaFleur should inject life into this stale offense.

Quenton Nelson, the sixth overall pick in 2018, ranked as the third best left guard (LG). Anthony Castonzo at LT will also play a vital role protecting Andrew Luck’s blind side. Marlon Mack has shown he has three down capabilities and should benefit running behind this line. Mack is a player I have be touting since he came out in 2017. Last year he broke out to the tune of 908 yards, 9 TDS, with 4.7 YPC.  Mack has however missed at least two games during each of the last two seasons. Despite durability concerns, Mack will flirt with top 12 RB status this year.

This group is led by grizzled vet David DeCastro (RG), and Alejandro Villanueva (LT). Both linemen graded as top 12 options at their respective positions. This bodes well for James Conner in 2019. While I expect Conner to have a big year, he is not a player I like long term and would look to sell high on him.

The defending Super Bowl champs rank 6th in this exercise. Shaq Mason ended 2018 as the number 1 graded RG. Both Joe Thuney (LG) and David Andrews(C) were top 7 at their positions. The only question mark is at LT, where Isaiah Wynn is slated to start. Wynn, the former first round pick, missed all 2018 with a torn Achilles. Sony Michel is locked in as the early down back, with James White taking on third down/passing duties. The patriots further muddled the RB depth chart by selecting Damien Harris in the third round. This may signify they are concerned about Michel longterm. The back I am buying here is White, who’s role remains unchanged.

In 2018, this group was led by Zack Martin, the number 2 graded RG. The Cowboys also received strong play from Tyron Smith, who was a top 9 LT. This already great group will improve with Travis Frederick returning from season long injury. Cowboys hope to get more production from second year player Connor Williams. Zeke will continue to eat and is my bet to finish as the overall RB 1in 2019.

Led by newly acquired, Matt Paradis, a top two option at center until he suffered a fractured leg.  This squad also features key member Taylor Moton at LT. Christian McCaffrey will build on his 2018 success and will finish as a top five back in 2019. He may however lose some early down work, and goal line carries to rookie back, Jordan Scarlett. Even with a few less carries, McCaffrey’s efficiency and exceptional hands will vault him to the top of fantasy leagues.

The Bears narrowly squeaked into the top ten coming in at nine. The driving force behind this line is Cody Whitehair, a top 10 option at center. This group also features decent tackles with Charles Leno Jr. and Bobby Massie. The Bears Jettisoned the incumbent Jordan Howard and upgraded with David Montgomery. They drafted the ultra elusive Montgomery in the third round. Montgomery may be limited on third downs with the presence of Tarik Cohen early in his career. Regardless, he is the back to own and a rookie draft target at 1.03

The Titans are the last team to make the list. This group is highlighted by 9th ranked Roger Saffold at LG, Taylor Lewan at LT, and Ben Jones, a top 12 Center. Titan’s coach Mike Vrabel has vowed to run the offense through Derrick Henry in 2019. Henry closed out last season with a boom; rushing for 585 yards, 7 TDS, at 6.7 YPC over the final four contests.  Henry will likely have a higher success rate running to the left side. Despite the top ten-line, Henry is a player I would like to flip for a less volatile option. Sell high.

Dynasty_GQue’s Nerd Notes – Tyler Boyd
Players On the Way Up