Deebo’s injury is unfortunate, but we’re not giving up on him that easily are we? @NateNFL breaks down the repercussions for the rest of the roster. 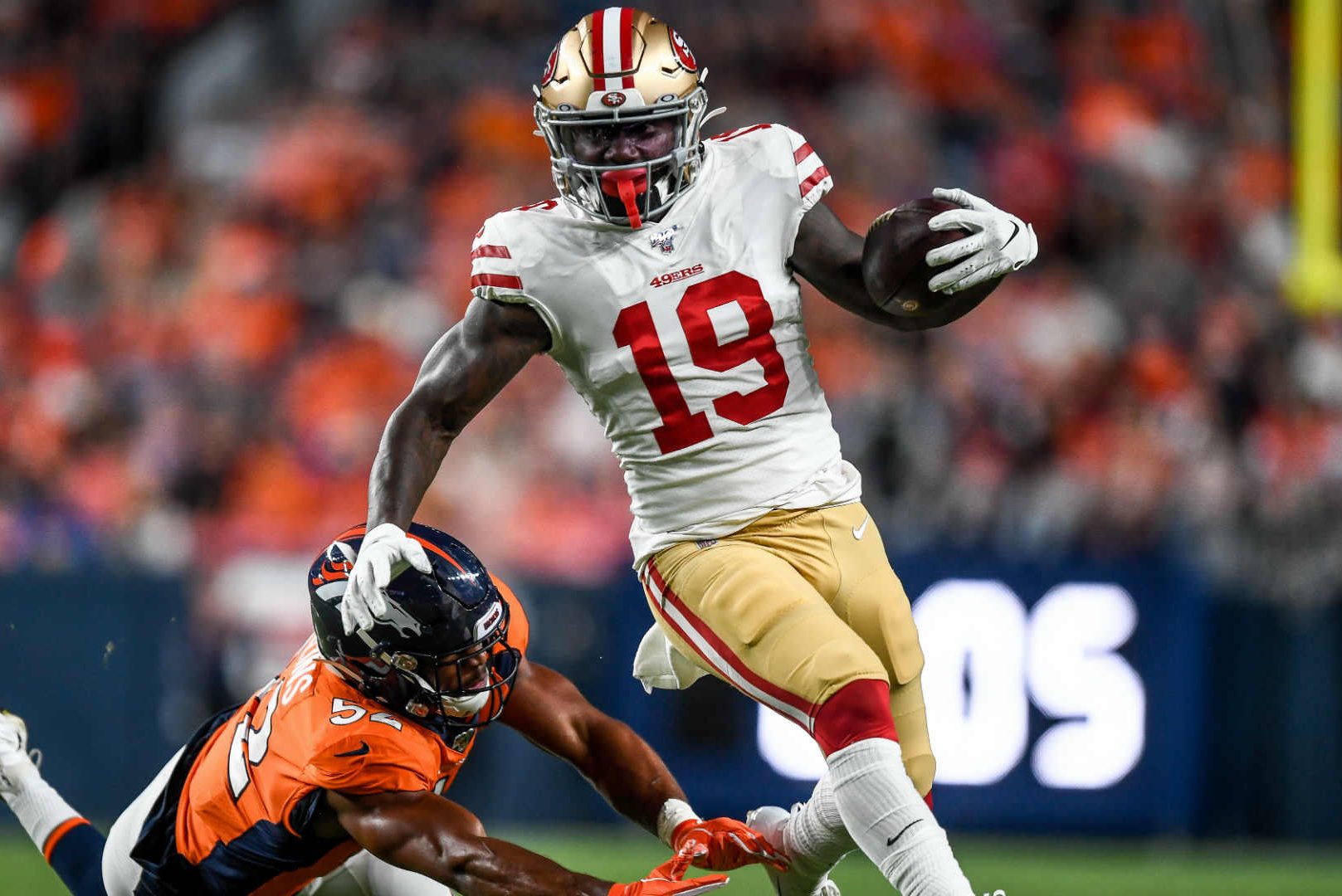 Oh no, what do you do when one of your top Breakout Candidates gets injured the offseason? Does Deebo continue his ascension to the WR1 in the 49ers offense? Or will he be outmatched by somebody on the depth chart? Maybe even one of the incoming receivers from this year’s draft class?

Don’t worry we got you covered here at Dynasty Nerds.

Just because Deebo broke his foot does not mean that you should try to sell him or not pick him up in your upcoming startup draft. Deebo is still all the player he was yesterday. The Niners offense will give him plenty of touches once he gets back on the field. Kyle Shanahan has had nothing but good things to say about Deebo. It has been hashed out again and again that whether through the air or on the ground, Deebo will get his touches.

Also, we don’t have to worry about Samuel missing too many games this year. Early reports are that he should be able to get back on the field during the early beginnings of the NFL season.

It’s unlikely that the owner of Deebo Samuel will want to sell while Deebo’s value is at it’s lowest. Still, it’s always worth testing the waters to see if you can get somebody who is panicking in reaction to the news.

As I stated earlier, Deebo is still going to see plenty of touches. And it’s no guarantee that somebody separates themselves from the pack in his absence. According to Dr. Edwin Porras (@FBInjuryDoc), if Samuel takes his time in coming back from this Jones Fracture, it shouldn’t have too much impact on his fantasy relevance. Ten weeks is the basic timeline for recovery. That would only be the end of August, so we’re not blowing up his 2020 season over this.

As an owner of Deebo Samuel or as a potential buyer (now or later), the most important thing is to watch how quickly he comes back from this injury. The worst thing a player or organization can do is rush the recovery process and cause a re-aggravation. As long as he takes his time returning from the injury, I wouldn’t foresee any long-term issues. Some wide receivers that have previously dealt with Jones Fractures include:

The 49ers 2020 1st round selection just got his hype meter reset. Many people were cooling the jets on Aiyuk after the NFL Draft. A great playmaker, Aiyuk looks to be in a similar role to Deebo in 2019. Aiyuk will be able to excel not only down the field but also on sweeps and screens that get him the football quickly and with room to operate. Without Deebo during the preseason and possibly the beginning of the season, Aiyuk will have every opportunity to step right into touches on that offense. With a 1st round selection, the 49ers were already making Aiyuk part of their future plans, but with this injury, he becomes an integral part of their immediate production. Ayiuk has the draft capital, and now, quite possibly, more opportunity than he may ever have to establish himself as an essential weapon in the San Francisco offense.

The longer Deebo is out, the higher Kittle’s ceiling will grow. Kittle is the most established weapon in this offense and a bonafide TE1 in all fantasy football formats. In TE Premium leagues last year, Kittle finished with enough points to be considered the WR10. If Deebo is not out on the field, Jimmy Garoppolo will have all the reason in the world to target Kittle even more often than before. Many of the receptions that Deebo ended up with last year were near the line of scrimmage, and that is an area that Kittle can take advantage of, from both in-line and the slot. While there will be other players vying for targets, none of them have produced like Kittle has, and he will surely take on an obscene market share if Samuel sees an extended period of missed time.

The “other guys” on the depth chart often get overlooked because none of them have been able to separate themselves from the rest. Dante Pettis was a hero during last year’s offseason and became one of the biggest disappointments to fantasy owners everywhere who bought into the hype. For reasons unknown to the public, Pettis found himself in Shanahan’s doghouse, which culminated in him being a healthy scratch for the Super Bowl against the Kansas City Chiefs.

Meanwhile, Jalen Hurd spent his entire rookie season on the sideline after a back fracture in the preseason. He has all the physical traits you’d want in a receiver, but we haven’t got a good look at him outside of a couple of exhibition games.

Then there’s the most “known” commodity, Kendrick Bourne. Bourne played across from Samuel for most of next year and was often the 3rd target in the passing game. After 42 receptions in 2018, Bourne finished 2019 with only 30 receptions, though he did end up with five touchdowns.

Lastly, Trent Taylor gets his name in the mix. In the final year of his rookie contract, Taylor has shown flashes of potential from the slot position, but has dealt with his own health issues and stays on the field. Unfortunately, Taylor has also dealt with a Jones Fracture that occurred in preseason last year and has since led to a myriad of further health issues. If Taylor is healthy going into the 2020 season, there may be an opportunity for him to acquire some targets.

So where does that leave this group of receivers for your fantasy team? Honestly nobody knows, and the best option could quite well be the least known of the group. Jalen Hurd was selected in the 3rd round of the 2019 NFL Draft, thus giving him good draft capital and marrying the 49ers to his success. GMs don’t like to “miss” on prospects picked on day one and two. John Lynch and Kyle Shanahan will want to see Hurd on the field this year. This will give them the chance to truly assess what his future will look like with the team.

On the other side of the coin, with a limited preseason, Kendrick Bourne is the group’s most known commodity. He’s now had three years with the team and will be going into a contract year. This could be his chance to prove his worth and make some money on his next contract, whether in San Francisco or elsewhere.

Pettis meanwhile doesn’t have a very optimistic outlook. Taylor has his injury question marks. If Jalen Hurd is available for you to pick up for cheap, then that’s the route I’d take, his upside could be huge in an offense that doesn’t have a true “alpha” wideout.

Last, but certainly not least, is the late-breakout superstar of the 49ers backfield. Mostert dominated at the end of the regular season and rolled right through the competition in the playoffs, leading his team to the championship game. While his role as the “lead back” is still a little murky, Deebo’s injury correlates with an upgrade to Mostert’s stock outlook. With one less weapon in the receiving game, Shanahan will continue to head up a run-first offense. Right now, Mostert is the face of the backfield. He will be a lock as an RB1 by the end of the year if he can get the majority of touches. He was 2019’s most efficient running back, and the more touches he receives, the more success he will bring to fantasy owners.

We already knew that the 49ers offense would be focused on the ground. Deebo’s injury will skew that pass/run ratio even further in the direction of ground & pound.

Deebo Samuel’s injury is unfortunate, mainly because he looked primed for a breakout season. Still, it is certainly not the end of the world. It may have happened early enough that his 2020 season could be mostly unaffected. Deebo isn’t a sell, and you’d be more than lucky to get him cheap from an owner right now, so stay out of the hot takes and try to monitor his progress as he goes through physical therapy and starts to get his feet back out on the grass.

Two quick hitters to keep in mind going forward with the 49ers offense:

There’s a chance the 49ers sign a veteran free agent receiver to begin the season. Who? Your guess is as good as mine, but some names that come to mind include, Taylor Gabriel, Demaryius Thomas, Jarius Wright, and Paul Richardson. Of course, don’t forget about Josh Gordon, who just applied for reinstatement this week.

Secondly, this may be a positive thing for the relevance of Jerick McKinnon. McKinnon recently revamped his contract with the 49ers to stay with the team. If Shanahan wants to get him involved, he could easily take some of the vacated carries from Matt Breida, as well as some of the early vacated targets on screens that would have been for Deebo. Not a bad gamble in PPR leagues if you have a deep roster, and he’s still out there on the waiver wire.

This was a fun one to sit down and get lost in. I love getting my creative more involved. I'm also a huge horror, book&film buff.

LOTS OF CHANGE in Wash. Take a peep and let me know what ya think. #MakeSomeoneSmileToday #GrowingIDPTogether #NerdHerd @MyFantasyLeague https://twitter.com/DynastyNerds/status/1277951636359561216

Washington looks to rebuild with a new head coach ad a team with some young talent. @OklahomieDoug walks up through the scary story.👇

🎧 @DynastyRich, @DynastyMatt and @DynastyPrice break down the Cam Newton signing with the Patriots. We also talk about how to handle dynasty leagues if there is no NFL season!😱 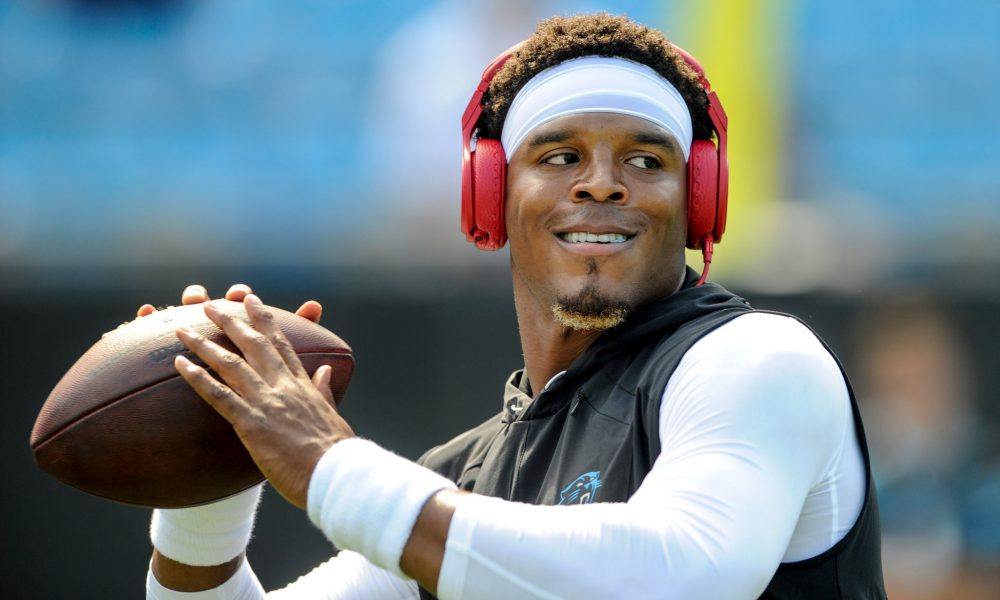 In this episode @DynastyRich, @DynastyMatt and @DynastyPrice break down the Cam Newton signing with the Patriots. We also talk about how to handle dyn...

Tonight at a new time, 9:30pm EST we will be joined by freshman phenom Re’Mahn Davis 🔥🔥🔥🔥 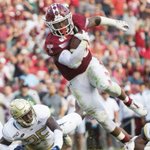 I had a lot of fun writing this! I focused on 3 WRs, each slightly different in production & ADP: 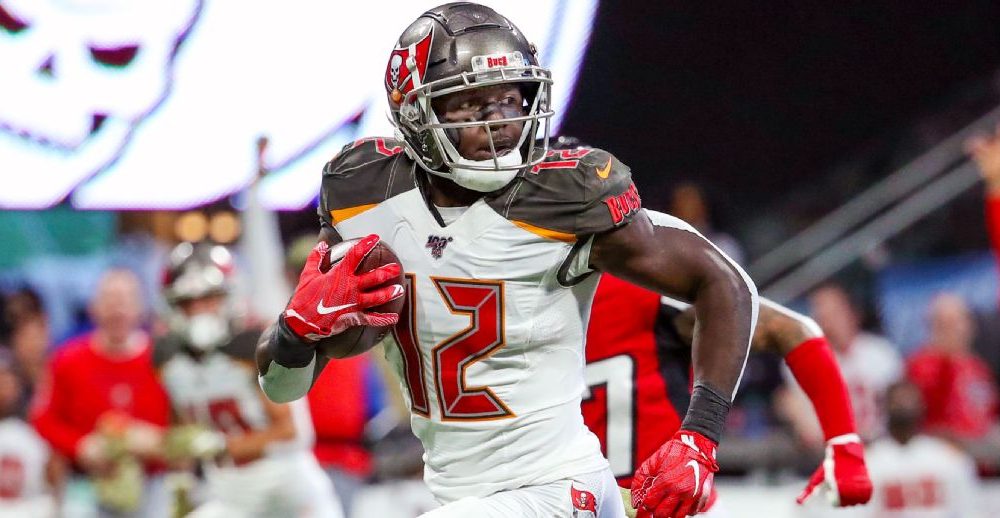 Continuing with the Contract Year Players series, @FF_MarvinE takes a look at three contract year WRs and evaluates whether you should you buy or sell...