Who should you start this week, Leonard Fournette or Chris Carson? Marlon Mack or Aaron Jones? @ekballer is here to help you sort it all out! 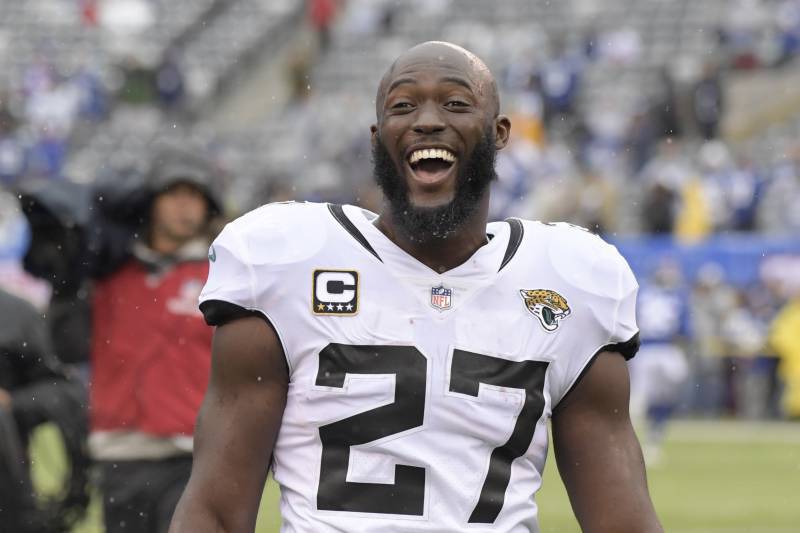 Hello Nerds! The DynastyNerds writers are here once again to provide you with your weekly starts and sits. We will be making our recommendations based on weekly consensus PPR rankings from FantasyPros. Here are the cast and the position groups they will be covering to help you win your week. Follow us, friend us, stalk us, whatever floats your boat

This week I wanted to start off my column with s suggestion: take all this information in context.

When I say to start a player, I’m looking at guys that I think will have the chance to outperform expectations this week. Maybe they had a bad game last week or haven’t broken out yet this year. I don’t mean you should bench Zeke or Saquon to start them.

Similarly, when I list someone as a sit, I think they might not live up to their rankings or to the expectations we might normally have on them. Don’t sit these guys if you don’t have a better option. I try to make one of my starts a guy a little lower on the rankings that might be worth a look at those players as a viable fill-in if you have a need.

Don’t take these as law. Read the data, understand the context and make the best decision for your own roster.

Jones was in my sits last week, and oh boy did I blow that one. He finished as the RB3 with 150 total yards and a TD. I faded him due to his tough matchup against a Vikings defense that stymied Devonta Freeman the previous week.

Well, this week he has another tough matchup, this time against the Broncos, but I’m not making the same mistake twice. I’m full speed ahead with Jones.

Denver has held each of their two opponents so far to less than 100 team rushing yards. Bradley Chubb and Von Miller are game wreckers, and Vic Fangio is a talented coordinator.
But the 2019 Packers have displayed a willingness and aptitude to run the ball that we haven’t seen from this team in some time, handing the ball off 32 times for 191 all-purpose RB yards against Minnesota. This is what we expected from LaFleur: a more balanced attack, an improved defense, more 12 personnel, and a healthy ground game, and it worked. Aaron Jones averaged 5 yards per carry and Green Bay outlasted another impressive game from Dalvin Cook.

The Packers will stay in the flames and let Aaron Jones roll this week. You should do the same.

Carson was an easy fade last week despite his stellar week 1. The Steelers are a struggling team, but their run D has been a top 12 unit so far, and they made Sunday a rough day for the Seattle running back. To make things worse, he put the ball on the ground twice and was outrushed by backfield mate Rashaad Penny 62-60 despite Penny having five fewer carries.

He had a bad day; he’s not getting replaced. Pete Carrol said this with his words after the game. More importantly, he said it with his actions when he pulled Penny to put Carson back in on 4th-and-1 with the game on the line.

This week will be better. The Seahawks get the Saints; what would have been a shootout a week ago now looks to have a very different game flow. Despite the talent they’ve added in Marshon Lattimore and Marcus Davenport, the Saints still rank near the bottom of the league in both pass and rush defense. Their usual offensive efficiency will be missing for about six weeks as Drew Brees recovers from surgery.

Expect the ‘Hawks to do what they do best: control time of possession, hit on some big plays downfield, and feed Chris Carson.

The ageless one, Frank Gore, has made the start column. This shocker special is only valid if Devin Singletary sits, which, as of this moment, seems likely. The rookie is day-to-day with his hamstring injury as the team “gathers information,” and grizzled veteran Gore adds one more start to his lengthy resume.

And a juicy start it is. The still-hapless Cincinnati Bengals have given up 4.9 ypc to opposing backs for 331 yards in two games, the third-highest total in the league. Zack Taylor’s offensive revamp has had Andy Dalton putting up stats, but the Bengal’s broken defense renders all his efforts useless.

The Bills should be able to have their way with the Bengals on the ground and through the air, so long as Josh Allen refrains from passing the ball to the defense too often. Gore should see plenty of work. He’s even a good bet to find the end zone as Cinci’s giving up two rushing scores a game.

Watch the injury reports. If Singletary’s out, plug Gore in for a top-24 performance.

Many drafted Fournette hoping for a return to the dominant player we last saw in his rookie season. Last year he missed eight games and was limited in others as a nagging hamstring injury held him back, but he still averaged 15 points per game and had a few blow-up weeks along the way. This year he’s healthy and seemingly primed for a breakout.

Through week 2 Fournette has rushed for 113 yards, not exactly the rebound you were hoping for, but not terrible either. The good news has been the 6 targets a game he’s seen; with no one behind him on the depth chart, Fournette isn’t coming off the field, and that passing-game work is a boost to his floor.

Even Foles’ injury hasn’t been the death sentence that it seemed it would be. Gardner Minshew has kept the ship afloat and looks to be a more than an adequate fill-in.

But this week the Jaguars draw the Tennessee Titans, always a formidable defense. The Titans want to keep the pace of the game slow, keep possession of the ball, and run opponents down with their ground-and-pound attack.

Last week the Titans held Marlon Mack- who was outstanding in week 1- to just 51 yards on 20 carries. Mack saw a high % of stacked boxes, and we should expect the Titans to treat Fournette the same way. With a weak o-line holding him back and the Titans trying to put the game on Minshew, I’m tempering expectations for Fournette. I expect Minshew to continue his growing bromance with D. J. Chark and Fournette to finish outside the top 20.

Speaking of Marlon Mack, the Colt’s feature back gets a tough matchup himself this week with the- wait for it- Atlanta Falcons. It’s been a while since anyone said that, but, with his star players restored to health, Dan Quinn’s defense is not the sieve he put on the field in 2018.

I know what you’re thinking: in week 1 they got destroyed on the ground by Dalvin Cook. But I’m fairly sure that by week 17, we’re going to be able to say that about 12 different NFL franchises.

This past Sunday night, in a rough, chippy grudge match, Quinn’s D held the Eagles backs to a combined 46 yards while seizing three turnovers.

Mack’s a good back, and he’ll get the volume, but the Falcons are going to have eight men in the box all night to try to take him out of the game, and they have the personnel to do it. This will be a Nyheim Hines game for Indiana as they try to keep up with Matt Ryan. If you have better options, use them.

The Chiefs running backs took a beating last week. While Patrick Mahomes was busy throwing for 30/443/4, the ground game was unproductive, and, even worse, both the starting RBs went down with injuries.

Williams suffered a “knee contusion” while backfield mate McCoy’s ankle was damaged enough to warrant an MRI. Both are questionable and likely will be game-time decisions, the last thing any fantasy manager wants to hear. This might open things up for Darwin Thompson to get some work, much to the excitement of fantasy managers who prospected on the rookie this summer.

In terms of the matchup, Damon Harrison has helped improve the once-permeable Lions rush D- they finished 2018 as a top-15 unit- but they have been just a middle-of-the-road defense through two weeks.

The issue here is more one of not knowing who will be carrying the ball or how much. Even if Williams & McCoy both sit, we know Andy Reid also likes the fourth piece in that backfield, Darrel Williams, so Thompson’s upside would be capped.

If we get some clarity during the week it might be worth reconsidering, but, as of right now, stay away from this whole backfield if at all possible.