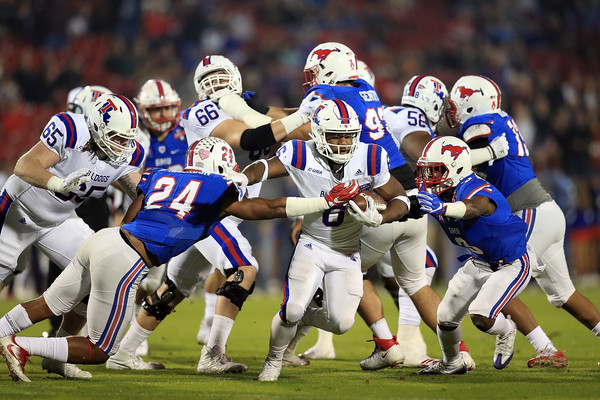 On May 8th, the rather surprising news that Mark Ingram would be suspended to begin the 2018 season was released. He was suspended for the first 4 games of the year due to violating the league’s PED policy. It’s not the best way for Ingram to start his contract year….

Rightly so, most analysts are predicting a mountain of carries for Alvin Kamara over those first 4 weeks. But it’s rare that the Saints just use one back in every situation (although Kamara is capable of it). That leads me to wonder if they give a few opportunities to other backs. We saw in 2017 how many carries the Saints were willing to give to their RBs as their game transitioned away from Brees’ arm. The Saints have Jonathan Williams, Daniel Lasco, and Trey Edmunds, but none of them get me aroused.

Their 2018 6th round rookie pick, however, intrigues me. We’ve seen time and time again that even the 2nd RB in high powered offenses can be steady fantasy contributors. And with Ingram potentially leaving after the season, an opportunity may be ripe for someone like Boston Scott to step up.

Boston Scott was drafted out of Louisiana Tech, following on from Kenneth Dixon. The diminutive back measures in at 5’7”, 195 pounds and really looks minuscule. However, he has surprising athleticism and power. At his pro-day, Scott ran a 4.45 40-yard dash, had a 38.5-inch vertical jump, 21 bench press reps, and has a 97th percentile agility score with an 85th percentile burst score. Additionally, he is elusive and difficult to tackle. Not only did he average 5.7 YPC during his college career, but he also averaged 4.2 yards after contact and forced 45 missed tackles on 180 touches.

Scott didn’t really produce until his 5th year in school as a Senior (as he was stuck in a committee), where he rushed for over 1,000 yards and added 20 receptions. A breakdown of his college production can be seen below:

The Little Machine had the 4th highest elusiveness rating among all draft-eligible RBs and a 1-2 punch between him and Kamara could give defenders nightmares. He’s still being selected in the 4th round or later of rookie drafts but has potential to contribute a lot earlier than most prospects with an instant pay-back value. He reminds me of a more explosive Kenjon Barner. I doubt there are many players in the 3rd round that will prove to be more valuable in a year’s time. The opportunity is coming fast for Boston Scott and he will likely be a free steal in most leagues. I urge you to keep him on your radar.