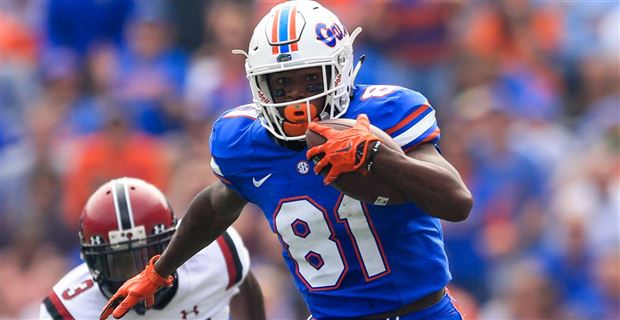 As the title dictates, Antonio Callaway is one of the riskiest players in the draft, but his talent may outweigh that risk. Touted as the next Percy Harvin at Florida, Callaway blew his chance to showcase his undeniable talent. Callaway was accused of sexual assault along with a teammate and therefore was suspended from the team in 2016. Ultimately his charges were dropped, however, there was some controversy with the attorney dismissing the charges due to conflict of interests. The attorney, Jake Schikel was a Florida alumnus and had invested heavily in the school’s athletic program. The following season (2017), Callaway was dismissed from the program due to his involvement in a credit card fraud scheme. So, he hasn’t played a meaningful down of football in quite some time and has quite a few red flags for NFL evaluators.

Despite that, there are quite a few rumors that teams like the Dolphins are looking to bring him in as an immediate Jarvis Landry replacement. Teams can clearly see that the talent’s there. It may not be evident by looking at his college production (below) but can certainly be seen in his combine performance.

At the combine, Callaway looked fantastic in the WR drills. His catching ability was natural, and he was so smooth tracking the football. He also performed well in the athletic drills. He ran a 4.41 40-yard dash (91st percentile speed score), a 34-inch vertical jump, and a 121-inch broad jump, whilst measuring 5’11” 200 pounds.

The 21-year-old WR projects to lineup in the slot where his quickness and sudden routes will excel. He’s exceptionally speedy and pulls away from defenders when running slants or crossing routes. As soon as the ball touches his hands, he brings it down. It can be thrown high, low, or away and he’ll get there.

If he can overcome his troubles he seems like a great prospect at a great draft price. NFL.com’s Lance Zierlein summarized it perfectly,

“Make no mistake about it, if Callaway had put together a trouble-free 2017 with even average production, he would be one, big Combine performance away from being one of the more buzzed about talents at the receiver position in this draft. However, his character concerns are at a point where they could derail any opportunity for a career. If he pulls it together, he could become a dangerous NFL talent.”

A positive note is that he seems to be owning up to his troubled past and trying to move on to better things. Callaway said, “I know him getting fired and all that was (because of) me, because of the season they had, I know I could’ve made a big difference. To see the program go down like that and coach Mac lose his job? That hurt me because I know it was basically because of me. I know I could’ve made a big difference. I made a mistake. I was young.” He went on to say, “It ain’t about me. I got a little girl. I just had her three weeks ago. I’ve got four little sisters. A single mom. I got to make it happen. I can’t be out here making mistakes and throwing myself into bad situations.” Hopefully, he can pull it together and set his priorities straight.

I’ve seen Callaway currently going in the 2nd round of a lot of rookie drafts, and at that price, he could be a steal. Although not a typical slot WR, I think a good comparison could be Mike Wallace. We’re now just over a month until we see who takes the risk on Callaway, and about 6 months until we see if he gives them a nice reward.