Of top rookie backs, Swift landed in perhaps the most complex rookie situation. Take a deeper look with @FFB_Vern for a deeper perspective and projection for Swift’s outlook. 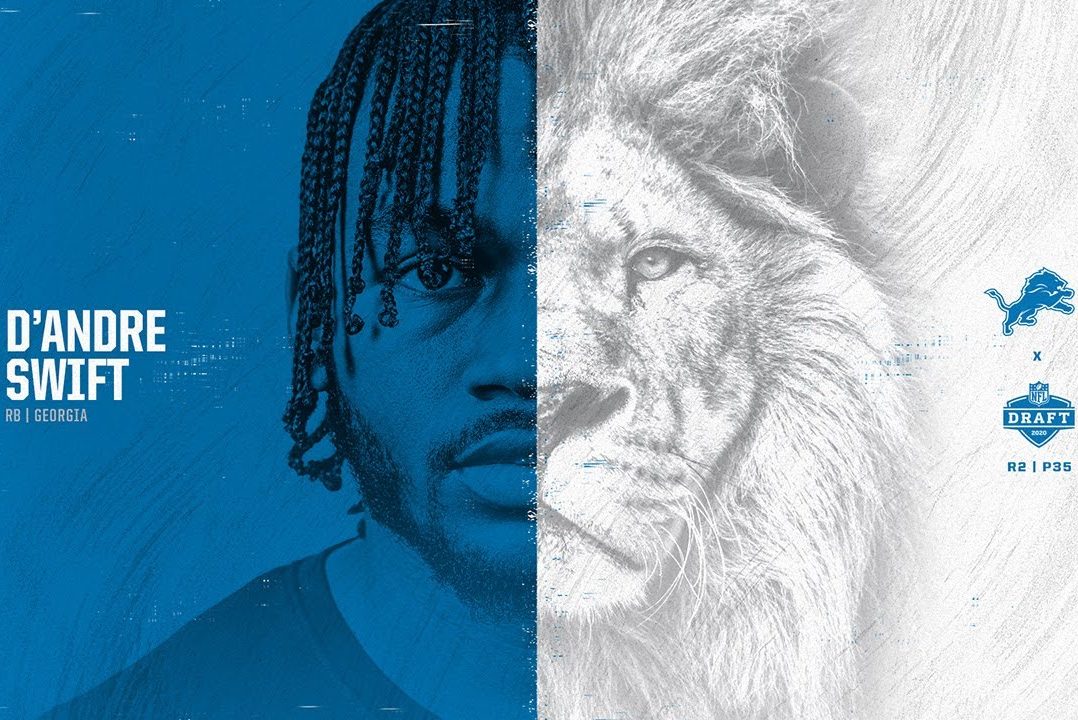 If you were like me, you were high on D’Andre Swift right up until Detroit selected him in the second round of the 2020 NFL Draft. Quarantine has robbed us of OTAs that may have provided some nuggets of clarity in his situation, but let’s use what is available to peek into possibilities.

The former 43rd overall selection in the 2018 NFL Draft has had two seasons truncated by knee injuries. The disturbing part about these back-to-back seasons with a knee injury is that it was the same knee. The importance of knee health to the position cannot be understated, and the Lions would prefer to avoid the impact if this were to become a trend.

It’s only a sample size of two seasons and 18 total games, but the fact is Johnson is trending down from a production standpoint. He has become less effective in both the running and passing games. A thought that comes to mind is the impact on the offense of losing Stafford, but his absence did not overlap with Kerryon’s active games in 2019. Some may look to the offensive line as the issue, but their consistency hasn’t changed from 2018–2019, ranked 20th in both seasons by Football Outsiders.

All things being equal…

Trending down in performance with no statistical difference in offensive line performance, along with repeated knee issues, would cause any franchise to consider moving on. The additional consideration for moving on, or at least preparing for that eventuality, is money. In this earlier look at NFL Draft fallout for top rookie running backs, it was highlighted that the Lions could move on from Johnson for $1.4m in dead cap, but per Spotrac they could wait until 2021 and save half of that in dead cap impact. This would allow them to manage the cap better while allowing themselves to see if Johnson is worth a second contract to be a part of their backfield dynamic.

Swift is simply more dynamic, healthier, and younger than Kerryon Johnson, so there is no real reason to believe that Johnson will provide much resistance for the lead role. While the cap situation indicates that they will maintain Johnson’s services, the presence of Darrel Bevell as OC is encouraging for Swift to be a focal point, assuming he gets the lead role. Bevell inherited Johnson but was involved in the selection of Swift.

With all the indicators that the Lions could be preparing to move on from Johnson, the words above from Matt Patricia could be a dreaded death knell to fantasy owners’ hopes. Patricia says this will be an open competition, which is not quite hopeful for Swift, avoiding a shared backfield. Swift excels in many ways that are superior to Johnson, and these advantages should give him increasing touches as the season progresses.

First of all, Swift, the 3rd overall running back per Nerd Score, is a better pass catcher and route runner than Johnson. Catching passes typically end up with running back’s in space. Swift is better in space than Johnson as well; therefore, we can expect more explosive plays once he catches the passes or breaks through the trenches to the second level.

There could be a perception from the surface presentation that Johnson could be more the thunder to Swift’s lightning, but they are about the same weight at 212-213 pounds, and Swift being 3 inches shorter presents a more compact package. This allows him to be both thunder and lightning since he can routinely set up defenders to be wrong in the open field. Roll the tape, and you will see when defenders are squared up for a form tackle he jukes them; when they compromise their footing to adjust to a juke they are expecting, he lowers his pads and makes them pay.

That is the deadly jab step above, and below shows how he can quickly transition that jab step into a low pad level to power through and generate extra yards like the 4-5 yards we see him create with power on the clip below. Kerryon Johnson really isn’t doing anything like that.

His vision and mental processing appear to be better, assuming it translates from college. He should establish himself in due time as the clear lead option. Let’s consider the upside that Swift gets the lead role despite the words of Patricia and competition to come; the next hurdle to massive success is that offensive line.

As mentioned earlier, Football Outsiders has ranked Detroit 20th overall in the last two seasons. The cumulative average of the individual PFF grades ranks 8th overall, 7th on the right side, and 5th on the left. This crazy disparity between the grades and the Football Outsiders statistics suggests there is simply a lack of play-to-play collective performance along the offensive line. While this could be discouraging, the upside is intriguing if they can get it together as a unit.

The franchise took steps to address what they must perceive as weaknesses at guard by drafting two of them in the 3rd and 4th rounds of the 2020 draft. Jonah Jackson and Logan Stenberg are two of the top five guards in Zone blocking per PFF. Assuming either of them can translate the production that resulted in their respective grades to the pro level, they could conceivably replace Joe Dahl, who appears to be the weak link at guard opposite Graham Glasgow. Its possible improvement by replacing Dahl could provide the synergy necessary for a consistent and cohesive run game.

Full disclosure: Swift’s 11th ranking highlighted an issue with RBV Burst criteria, as it was strictly looking at North/South burst. Looking back at the tape, he often had to burst laterally to the sideline to deal with penetration or pursuing linebackers. That criteria have since been adjusted, but Nerd Score’s assessment of his burst is a better reflection of this ability.

When looking at fits pre-draft, Running Back Vision indicated Swift’s best fit would be in an offense that features outside zone to take advantage of his abilities in space and on the edge. He also boasted the second-highest vision score on Inside Zone in RBV, which should encourage an increase in zone style runs in the offensive game plan.

The Lions appeared to run Zone ~53% of the time, but there is no reason it couldn’t increase to feature his strength. While his overall Gap score was low in RBV, his offensive line was ‘true neutral’ in that their average overall blocking assessment in Gap plays neither helped nor hurt Swift in a significant way. The Lions had more success in Gap style plays, about 70% of which were Power/Counter concepts, which Georgia ran very little of for Swift’s 2019 carries.

Bevell is a smart OC, and it would only make sense for him to cater to Swift’s strengths. It is what he has done historically with some of the best runners in recent memory, including Marshawn Lynch and Adrian Peterson. When Bevell has had a back capable of carrying the load, he has been able to produce a top-five rusher on average. Swift’s ability and Bevell’s scheme could reasonably give Swift top-five upside.

Ultimately, Swift, like Jonathan Taylor and J.K. Dobbins, will require patience from owners. Like those other rookies, he has a path to upside in 2020, but looking through the lens of the standard running back window of 3 years, Swift is sure to lead that backfield in 2021 and beyond. If he earns the trust of Bevell and carries to go with it, he could be a dominant force in football.

Bevell’s RB usage history, upgrades to the offensive line, Johnson’s injury history/cap situation, and the 74 RB targets vacated by Theo Riddick, all add up for a productive start to Swift’s career. If you have some later rookie drafts as I do, I won’t hesitate to spend high capital on Swift. After looking at the situation, it is conceivable that his circumstances could be better than that of both Dobbins and Taylor, even in the short term.