The Rams 57th pick, Van Jefferson, has been underrated throughout the draft process. This level of draft capital has caught @FFB_Vern’s attention and it should have yours too. 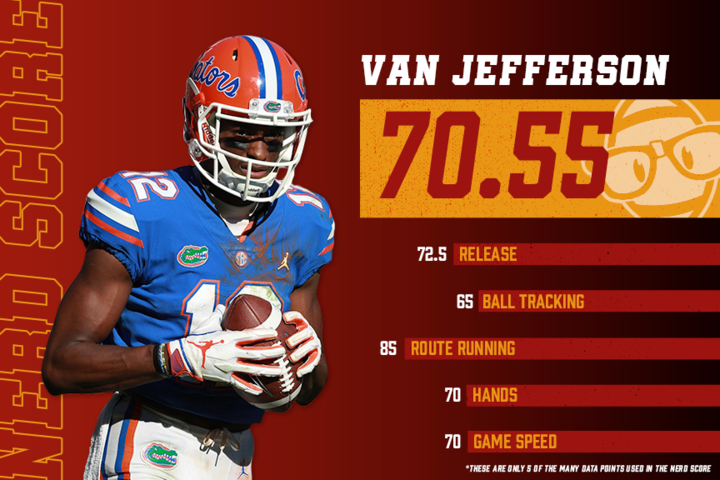 With the 57th pick, the Rams selected Van Jefferson. Spending this type of capital on the wide receiver from Florida speaks volumes. Combine that with the recent exit of Brandin Cooks, and one can’t help but wonder about the Rams projection for Jefferson’s abilities. What can we expect in Jefferson’s rookie season?

“As you dug deep into him, we kept saying, ‘god, this guy reminds us of some combination of Cooper Kupp and Robert Woods’ and both of those guys have been really successful for us and we didn’t think we could pass on him,”

If this is what the Rams think of Jefferson of a prospect, that is extremely high praise. Van Jefferson panning out to be a blend of the Rams top two receivers over the last few seasons would be a great impact on that offense. This explains why the Rams drafted the 12th wide receiver in the 2020 NFL draft. It is easy to expect Jefferson to overcome his main obstacle to snaps if he lives up to the Rams’ projection.

Before he even sniffs the game day grass on any meaningful snap, Jefferson has to establish himself as a contributor. The Rams have had great highs and disappointing lows as an offense during Jared Goff’s tenure, and their recent moves indicate they want to continue a flux of inexpensive talent into the offense that can grow with their signal-caller.

Perhaps his biggest obstacle to getting on the field aside from learning the playbook is Josh Reynolds. Draft capital is in Jefferson’s favor since Reynolds was drafted in the 4th round at 117 overall. Josh Reynolds only got significant playing time when Kupp was out in 2018, and he garnered nearly six targets per game. The challenge for Reynolds is he only converted 55% of those targets. Some blame lies at the feet of Goff, but maybe his subpar catch rate is indicative of he and Goff being on a different page with an undesirable frequency.

Van Jefferson has been touted as one of the most underrated talents in this wide receiver class. In revisiting his draft profile, we are reminded of the real foundations of his ability come from his quickness, release, and route running, which all allow him to win early in the snap. The quality of his route running and release are confirmed in NerdScore where he ranked 2nd and tied for 5th, respectively.

Beating press is critical at the NFL level. An inability to beat press consistently limits potential alignments. Good thing this is a strength of his game, and he demonstrates that he comes to every rep with a plan.

To me personally, he has a disgusting arsenal of footwork and hand moves in his release. These tools will allow him to uncover quickly and play any receiver alignment, giving McVay additional offensive flexibility. This quality of his game is especially important for those QB-friendly layup routes like the slants and digs in the short and intermediate areas of the field. These types of releases are not major features to Cooks’ or Reynolds’ respective games. Let’s take a look at a few of his releases.

The slant route is basic in concept, but Jefferson makes it much more effective by his release against this press look with the safeties crowding the line of scrimmage. Notice how he releases at a hard angle to the left, effectively widening the cornerback and creating space as he explodes off of his jab step to the middle of the end zone. He also shows his competitive toughness, catch radius, and strong hands as he holds on to this touchdown through contact.

Jefferson’s feet and body language consistently seduce the hips of press corners. The manipulation is so convincing it spins them “right ’round,” making it easy to attack their blind spot as we see above. Even when he doesn’t get that type of commitment from the DB, his change of direction towards the top of the stem allows him to win on back shoulder throws like this:

When looking at Cooks’ and Reynolds’ targets last year, neither showed this level of ability. It’s totally possible the Rams were focused on using Cooks’ speed to create linear space, and Reynolds mostly succeeded as facilitated by play design. Neither of them offered the sharp, snappy, and calculated nature of Jefferson’s route running.

The real test against press is about how you deal with physical contact. Jefferson was not often affected by jam attempts, and even when they try, he can defeat it with a combination of quickness, footwork, and hand moves as you can see below:

We also see in that clip concentration and competitive toughness at the catch point. He shows good play strength through contact, even when DBs have a hold of his jersey. The mental toughness to suppress the distractions caused by contact is an attractive quality that Reynolds lacks.

We have seen two of the most important aspects of Van Jefferson’s game: first, his release, as explained above, and second, we have seen plenty of evidence of his route running capabilities. Speed is often a little overrated in importance, but it’s hard to argue against speed’s amplifying impact on separation created by the other two. Game speed, or the ability to combine mental processing speed and physical speed to play fast, is what we want to assess for receivers.

When we look at NerdScore, he is tied for 14th in-game speed along with CeeDee Lamb. Jefferson did not run at the combine due to a Jones fracture discovered during combine medicals, so it’s up in the air how fast he really is. The combine would have only helped confirm or call into question what we have seen on tape, but there was an observation at the Senior Bowl that may serve as an indicator to his upside in the speed category.

At the Senior Bowl, he was clocked as the fastest receiver at 21.05 mph, and this is faster than Denzel Mims (20.26 mph), who ran a 4.39 40 at the combine. The great thing about this comparison is that it is a measure of speed with the pads on and also with the mental processing complications of a play on the field.

Speaking of speed, Cooks was the Rams’ “deep threat” with his combine 4.33 speed. Cooks role as the speed option is confirmed by the fact that most of his route breaks (on routes other than smoke or bubble screens) occurred at ten or more yards downfield, followed by the target, which was also around 15+ yards on average. Cooks was a seemingly perennial 1000+ yard receiver, but 2019 had a significant dip in production. This explains them shipping him to the Texans somewhat, but perhaps a change in offensive approach highlighted some of his usage limitations.

The design of the offense often featured Cooks in the reduced or “Nasty” split. This alignment opens up the route tree for outside receivers to include out-breaking routes. This type of alignment can become a nightmare for corners when they face technicians like Van Jefferson. McVay could want to expand his possibilities in those alignments because Cooks was mainly targeted on bubble screens or the flat in that split. Jefferson surely put on tape his ability to get open early in the route, and this is a quality that is sure to move the chains more consistently than speed alone.

What can we expect in Van Jefferson’s first season? Josh Reynolds should not be much of an obstacle to overcome. The challenge for his production will come in becoming a reliable and available target on whom Goff can depend. It will be hard to get earlier in the progression with the likes of Robert Woods and Cooper Kupp ahead of him, but there are sure to be those games where defensive adjustments to those two receivers will make him the best option for Goff.

A line of 50 targets, 40 receptions, 510 yards, 3 TDs is a fair expectation in year one for Van. If he overtakes the third position from opening week, we should not be surprised by a line approaching 65-800-6. Moving into year two, it becomes reasonable to consider if Robert Woods will still be around. Jefferson could demonstrate the type of ability in his rookie year that may have the Rams considering eating the 1.1 million in dead cap for 2021.

Looking back at the draft profile I wrote earlier this off-season, the context of the landing spot, situation, and draft capital spent did not yet exist. Now that we have that information, my original projection of mid-range WR2 to top-end WR3 is admittedly a little low. Understanding his competition, the void he could fill, and possible future roster moves for the Rams, he should be firmly in the WR2 range, with the potential future upside of low WR1 (lofty I agree, but possible if things pan outright).

Van Jefferson is an excellent acquisition, especially if he lasts until the third round of rookie drafts. If you are towards the end of the second round, he is worth a reach. Patience is the name of the game for wide receivers in dynasty, but this is one player you can be confident will be worth the wait.

🆕 Dallas Goedert: A Star Is Born

⭐ Is 2020 the year Dallas Goedert takes the reins from Zach Ertz? @AlexaTradeTalk tells you why 2020 will be good for Goedert.👇 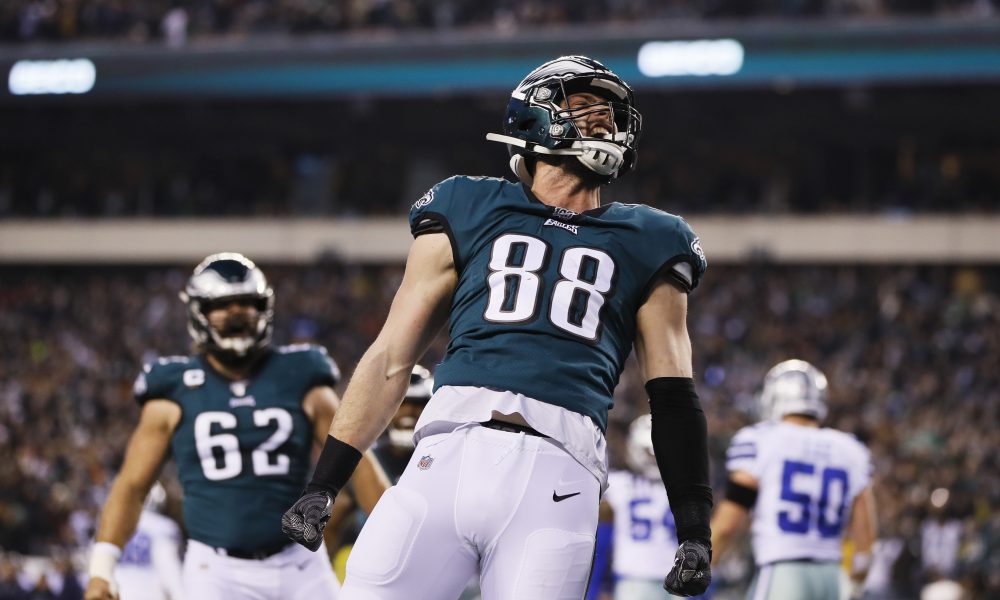 ✈️ Saving Gase: How Sam Darnold and Co. can put up fantasy points against their coach’s wishes.👇

Saving Gase: How Sam Darnold and Co. can put up fantasy points against their coach's wishes.

Follow this thread as the college season approaches I will post my top 12 at each position for #devy and my 2021 draft eligible players. To check out my entire Devy ranks check out @dynastynerds

Who's the biggest benefactor if Mostert is traded?