Can Boogie Basham be the EDGE rusher to anchor your IDP roster? @FFPeeblesChamp takes a closer look and gives you the low down. 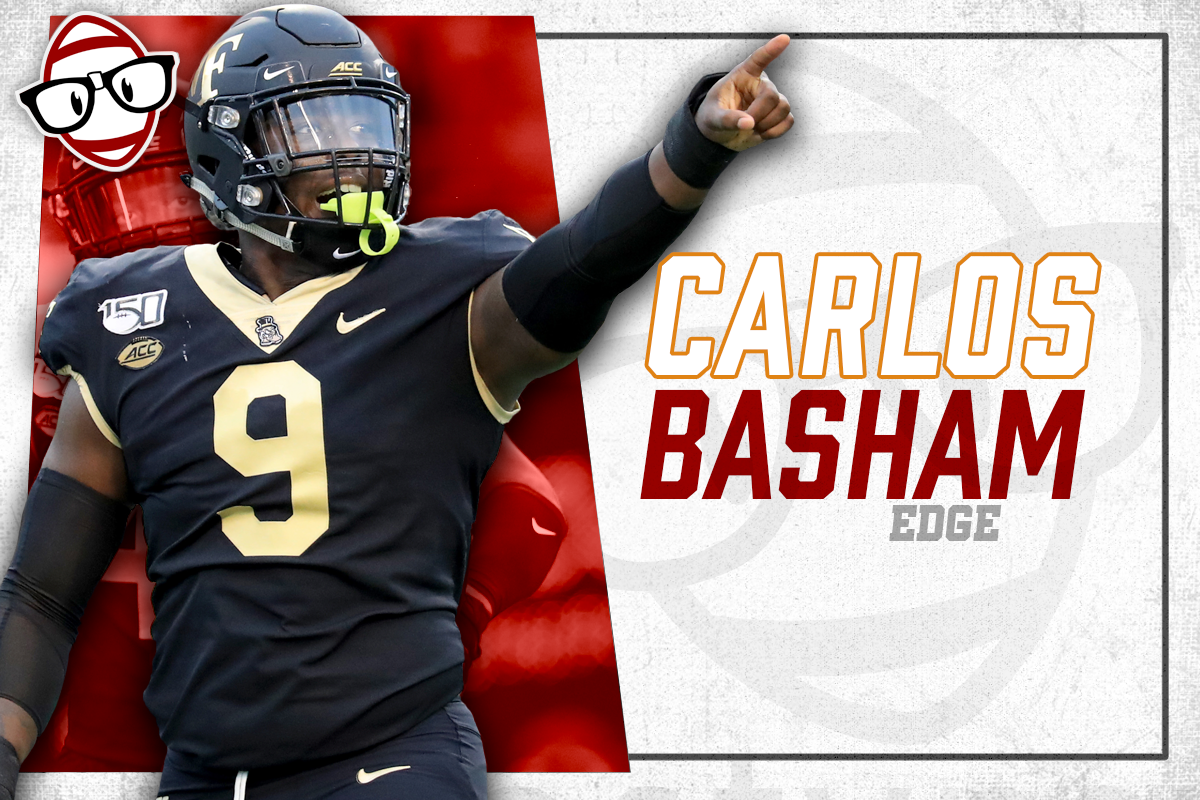 Carlos “Boogie” Basham Jr. improved every season in college and is a rare blend of size and athletic ability. He would have likely been a second-day pick if he opted to enter the 2020 Draft but chose to return for his senior season. He earned the nickname of Boogie as a child due to his love of dancing and now puts his moves to good work by wrecking offensive lineman and sacking quarterbacks.

Basham was a three-star defensive end per 247Sports and attended high school in Roanoke, Virginia. He fielded offers from Pitt, Cincinnati, and Old Dominion before ultimately committing to Wake Forest.

As a redshirt sophomore, he earned a starting spot on the Demon Deacon defensive line and racked up 64 tackles, with 11 being for a loss. Basham had four and a half sacks and 11 hurries, establishing himself as a pass-rushing force. He also scored a touchdown on a fumble recovery for the lone score of his college career.

2019 was Basham’s most impressive season as he tallied 18 tackles for a loss, ten sacks, and forced three fumbles. He notched 57 tackles and looked primed to make a jump to the NFL. Many were surprised he chose to return, he would have been an early pick, and the Wake Forest team was not very good.

Basham forced four fumbles in only six games in 2020, good for first in the ACC and fourth in the NCAA. He had five sacks and chipped in 28 tackles while facing double-teams on many plays. The shortened season didn’t help his stock much; it verified he is a dominant defensive lineman.

The Wake Forest defense was one of the worst in the NCAA, and Basham consistently had multiple linemen assigned to slowing him down. His perseverance and dominance over three seasons is a testament to how hard of a worker he is.

Basham has a dominant inside counter move and has worked to add more moves to his repertoire. He has a phenomenal motor and can even drop back in coverage – he had eight passes defended in his four seasons playing at Wake.

Basham maintains his gap and has flashed enough power to push lineman into running lanes, disrupting plays. He is hard to move off his spot, and because of the motor I mentioned above, he excels in pursuit of runs as well.

I love how Basham maintains his gap while engaged and drifts with the flow of the play. Then, he explodes through a seam and pummels the ball carrier. I love the disposition and tackling authority. It’s the type of play that can really feed a defense.

This is another play where his discipline and sticking with a play ends up with another nasty tackle. Basham is caught in some clutter but follows the play and stonewalls the back before reaching the goal line.

In the final clip on this trait, Basham is fully engaged by the offensive lineman but holds his ground. He powers the lineman toward the running lane and makes the tackle, seemingly with one arm. I love the determination and power.

The inside counter move is his bread and butter, but Basham has a few other moves as well. He uses his spin move effectively and also uses his length to create leverage mismatches and win matchups. He has enough power to overwhelm at times, and coupled with the motor – he can be very tough to stop.

Basham uses his hands to quickly push past the first lineman, and the second lineman doesn’t have a chance due to his speed. Quick and easy sack on this one, have to show a little more effort against his speed and get off.

In this clip, he takes advantage of a little confusion and, when he sees the gap – shoots into the backfield to take down the quarterback while forcing a fumble. It’s less technique but patience and reading what the line gives you on this one; he’s a smart pass rusher.

Here is where the athleticism comes into play, Basham gets a really quick jump at the snap and is surprisingly agile for his size. When he gets in the clear, he has a second gear and can cover ground quickly.

Wow, I love the explosion out of the stance on this play! Basham shoots out of his stance and swipes the lineman out of the way en route to a sack of Sam Howell.

This is a good display of the play speed. Basham lopes patiently to watch the play develop, and when the quarterback starts to break out of the pocket – he explodes across the field to bring him down.

Basham never gives up on a play, and this clip is a great show of it. He gets engaged at the line by two offensive linemen, and when the quarterback breaks out to run, he tracks him down and makes the tackle ten yards downfield. For a man of his size, Basham can really move.

With his size and strength, it will give NFL teams the ability to move him around on the defensive line to fit needs and maximize line potential. Basham’s strength, size, and run-stuffing ability could be utilized as a 3-tech. He played more as a 7-tech, sliding out to the end and dropping his hand in the dirt. He can also stand up and be used as a pass-rusher with the ability to drop back in zone coverage.

Basham wins with good technique, speed, and athleticism. His power is good but may not be as effective in the NFL. If a lineman can go toe-to-toe with him in power, he has struggled.

The high-motor playing style sometimes needs to be reigned in and can lead to Basham overpursuing, putting him out of position. He will need to learn how to maintain his assignment and not take himself out of plays.

As effective as he is a pass-rusher, he isn’t really an edge-setter and doesn’t have the speed and bend to get around wide consistently. He has a good array of moves but needs to work on stringing them together to be an elite pass-rusher.

Every prospect has things to work on, but Basham gives NFL teams a pretty damn good ball of clay to start. I’d like to see him on a team with a history of developing lineman where he can grow and learn. He has some impressive traits, and the relentless motor is a great trait for a defensive lineman to have. Basham could see a good complement of snaps in 2021 and be a contributor right away, but it may take a few years to hit his ceiling.

As far as the NFL draft, Basham could hear his name called Thursday night, but I believe an early second-round selection is more likely. He could join the Jets, where his older brother Tarell plays, and he would likely be the best pass-rusher they have from Day 1. Miami has a solid line, and Basham could fit in well, not having to play tons immediately and can work with coach Brian Flores to develop. Nearly every team picking in the first half of the second round could use him, honestly!

From an IDP standpoint, I love defensive lineman with the safe floor of tackle production who can also give your team a big boost from sacks and turnovers. Basham should be a latter half of the first round or early second-round pick in an IDP-only rookie draft. In a mixed rookie draft, he will likely be a fourth or fifth-round pick.

Basham will be an effective pass rusher and provide a safe floor as an IDP asset. The upside is there, and he could work his way into a larger role and more sack production. I am a little apprehensive when valuing him, I love what he brings to the table, but I worry he may be much closer to his ceiling than a few other EDGE prospects in his tier.

Basham turns 24 this year and is likely close to max weight for his frame, and his power won’t win as consistently at the next level. If he can string moves together better and hone his technique, the former Demon Deacon has a great shot at excelling on Sundays. If not, Basham will be a solid floor DL2/3.