After an unusually quiet senior season, @DynastySlabs walks us through what to expect from Dazz Newsome at the next level. 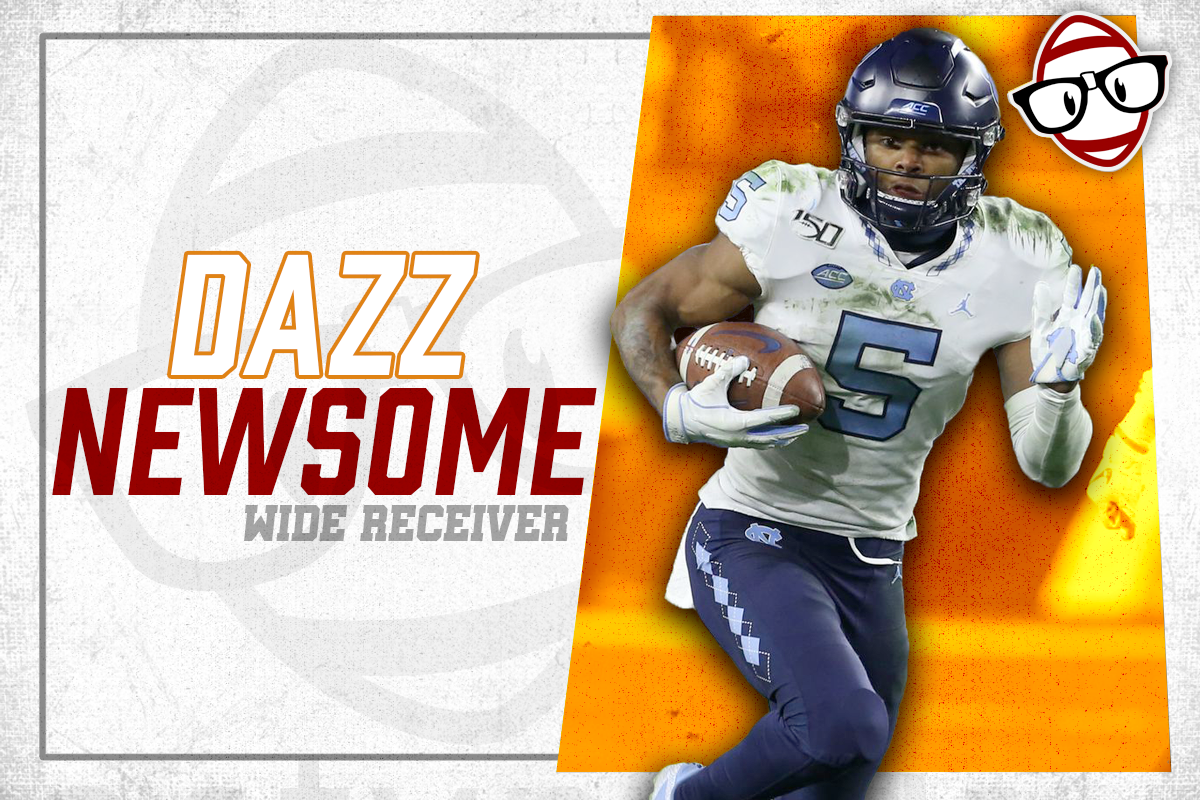 Coming out of high school, Newsome was a swiss army knife. Newsome spent time at both receiver and running back, despite his ranking as the number one defensive back in Virginia. However, upon his arrival at UNC, Newsome stuck at receiver. At 5’10” and 170 lbs, he was undersized but has bulked up over the past four years and is currently listed at 5’11 190 lbs. He isn’t going to run anyone over at that size, but it’s a good starting point for someone who projects as a slot receiver at the next level.

Newsome saw limited action in his freshman and sophomore seasons before exploding onto the scene as a junior. In 2019, Newsome led the team in receptions, turning in over 1000 yards and ten touchdowns. To cap off a fantastic year, Newsome made 2nd team All-ACC and was named to the Paul Hornung Award Watchlist, given to the most versatile player in college football.

After an amazing junior year, expectations were high for the Tar Heels and Newsome. But, Newsome’s 2020 season was underwhelming. He flashed in some games (10-182-2TD’s vs. Wake), but for the most part, Newsome was just okay. He finished the year with over 300 fewer yards than his junior year, despite the Tar Heel offense averaging 15 more passing yards per game. He also scored four fewer touchdowns despite the team upping their scoring average by a touchdown per game.

Even with an okay but not great senior season, there are still things to like about Newsome’s game. Let’s take a look at the tape:

Newsome played both sides of the ball in high school. While he stuck as a receiver at Carolina, his awareness of spacing and concepts of the defense in running shine through in 3 different ways.

Dazz is electric with the ball in his hands. He is quick, fast, and tough, but what sets him apart is his spatial awareness. He has such good instincts for where defenders are on the field, where they are trying to make him go, and how he can use that to set up blocks. Here, he is actually interfered with on the catch, sidesteps the defender while keeping his eyes on the punt, and then sets up his blockers perfectly on the way to the end zone.

Newsome is not just a willing and capable blocker; he is a smart one!

Newsome is at the top of the screen above. At first glance, he doesn’t do much, but I actually think that is on Michael Carter, the running back. If you look again, Carter has clear sailing if he cuts outside, and Newsome knows it. He isn’t just out there blocking to look good on film. He understands where the defense is positioned and tries to set his guy up to break a big one.

I could have chosen any of a dozen plays from the Virginia Tech game alone to highlight Newsome’s ability and toughness as a blocker. He doesn’t get a pancake here by any means, but he seals the edge, and if you watch, he is fighting back to the guy even after the play is past him. That’s the type of teammate I want to go to battle with.

Newsome’s field awareness helps him make plays with the ball in his hands and block well for his teammates. It allows him to improvise and create opportunities for his quarterback to get him the ball.

Here you can see, Newsome runs a seven-yard comeback route. But, when he sits down in the zone, a defender is right there trying to bait Howell into throwing a pick. So, what does Newsome do? He calmly slides to the outside, knowing the corner out there is playing too far off to get to him in time, creating an easy seven yards for the Tar Heels.

Above, Newsome’s original route is read and cut off by the DB. No worries though, Newsome feels the soft spot in the defense, slides back, and creates a big gain.

Newsome is an accomplished route runner. Playing largely out of the slot, he is a master of changing direction quickly, planting his foot and taking off.

Here he comes close to making the defender fall. Newsome comes off the line, throws a devastating dead-leg, breaks in, and then can quickly flip his hips, change direction and accelerate, leaving the defender stumbling to catch up.

If nothing else comes through when you watch Dazz Newsome play football, this much should be clear: Dazz is not scared of you, your friends, or anyone you might know to call.

This touchdown was actually called back because he lowered his head on the defender he met after crossing the goal line. And, while I would prefer no penalty, I love the aggression.

Again, there is no fear of working across the middle of the field. He gets lit up but hangs onto the ball and continues working. I love Newsome’s toughness and think teams at the next level will too.

I like what I see on film from Dazz Newsome. I think he’s a winner. He makes plays on special teams, is a fantastic blocker, heady, and makes others around him better. This is a super deep class at receiver, filled with tons of “number 1” guys. Newsome is not that, but given the opportunity, he can carve out a role in the slot and become a flex/WR3 option for your fantasy team. The dip in his numbers during his senior season concerns me. I would have loved to see his production take a step forward. But the best news is, you don’t have to spend much to acquire him. In our Nerds Team’s recent 1QB Rookie Mock Draft, Newsome went undrafted in both the 1st and 2nd rounds. I’m taking a shot on Newsome in the third round of rookie drafts, and you should too.