The 2020 Heisman Trophy winner is one of the most polarizing prospects this draft. @FFPeeblesChamp breaks down how he can be successful. 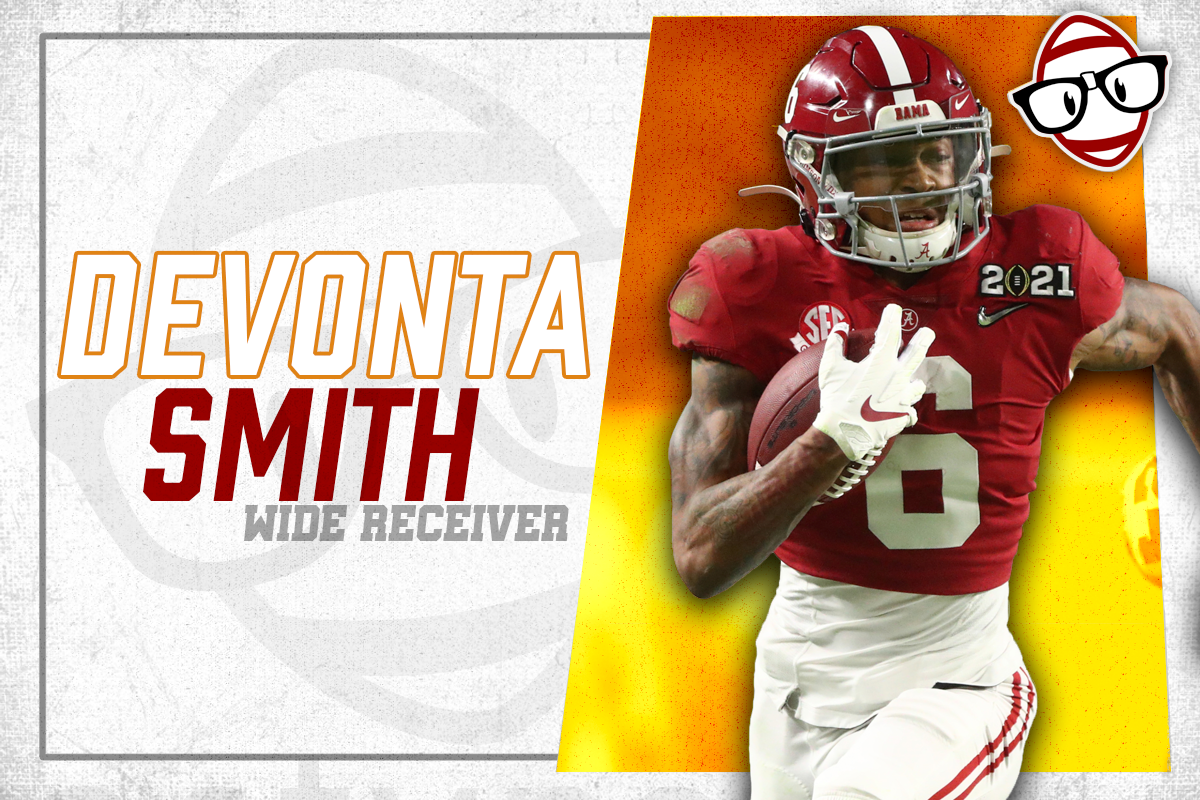 Devonta Smith was the most dominant receiver in college football in 2020. A lot is made about his size, yet he posted a 45.5% Dominator Rating in 2020 and led Alabama to a convincing national championship. So why do so many people think he can’t succeed in the NFL?

Smith committed to Alabama as a four-star prospect from Amite, Louisiana. He was the ninth-ranked wideout in the class of 2017 and sixty-second ranked overall player in the class. He had offers from nearly every college in the southeastern corner of the country. After official visits to LSU and Florida State, he visited and committed to the Tide.

In 2020, he showed what he was capable of and won nearly every award a wide receiver could win. Smith’s 117 catches, 1,856 yards, and 23 touchdowns led the NCAA in each category. He also had 237 punt return yards, third in the NCAA, and a touchdown via punt return.

Smith has so many things to love about his game, and he is very close to a complete receiver. He catches everything, is always open, and is so dangerous with the ball in his hands.

Because of his precise route-running, he is nearly always open. He is calculated with his movements – selling routes well with head and hip movements, setting up defensive backs, and finding spots in the defense where he needs to go.

It’s a simple route, but Smith sets it up so well with an aggressive inside move then breaks out to embarrass Shaun Wade. The technique off the line is something you see so often in Smith’s routes.

Smith works for positioning on this play and wins with hand usage; he gets engaged but quickly breaks off it and gains separation with his hands downfield. Smith uses this to turn a simple route into a huge gain with technique, and it happens so quickly, difficult to guard.

Smith makes every catch look easy, even if it truly isn’t. He catches the ball away from his body and shields the catch point from the defensive back. It’s truly a thing of beauty.

Rather than break down each of these, I will attach the videos and show the hands. In the back of the endzone, against the sidelines, plucking it off the turf, Smith creates separation and catches everything thrown his way. His body control and awareness are insane; he always knows where he is and adjusts to the ball while making ridiculous catches.

So he gets open, catches everything thrown his way – what else can he do? Now he has the ball, and he is outstanding after the catch. He creates angles and doesn’t take many direct hits. Despite his size, he can be tough to tackle and can break out of tackles as well.

I love the effort on this, it’s only ten extra yards, but Smith makes about five defenders miss en route to the extra yards. To make the catch and then be aware of his surroundings makes him that much more of a dangerous receiver.

This route starts as a run block, and then Smith breaks it off, quick and clean, then off to the races. He doesn’t have elite breakaway speed but enough to make plays like this routinely. Once he makes a clean break, the defensive back doesn’t have a shot.

Smith never gives up on a play, and he competes hard, even when the play isn’t going his way. Despite being a superstar receiver, he willingly returned kicks and punts also.

I contemplated putting the first video from the section above to highlight his effort but wanted to show a quick clip of his blocking here.

In scouting college wide receivers, effort in blocking is something I don’t see consistently enough, but Smith always gives full effort. I love seeing it and he isn’t the greatest blocker, but he is always engaging and never gives up. Even away from the ball, Smith is engaging and prepared.

The biggest knock will always be his size. At 6’1” and 170 pounds, he is rail-thin, and the success rate for receivers with this build is meager. A few times, he took a huge hit and would pop back up as if nothing happened. If this happens in the NFL too often, he is not going to hold up. Adding 20 pounds would do wonders, and I can’t see him losing any of what makes him so good by adding weight. He isn’t a freak athlete; he is good because of his technique, hands, and intelligence.

Because Smith wasn’t truly dominant until his senior season, his breakout age is later than many draft analysts would like. This thread below is a detailed look at breakout age compared to NFL success.

With a breakout age of 20.8, the success rate for wide receivers with this breakout age is much lower. It’s hard to hold it against him, Alabama has a crazy stable of wide receivers, and it’s often hard to break into the lineup without injuries.

Has he reached the ceiling of what he can do? There is not much to improve on, and will his game improve much in the NFL? These are valid questions and could lead to what he does being capped. Although what he brings to the table already could still make him a productive player at the next level.

Smith will be a quality NFL receiver, despite the size, but many worry he will be injured and never be a true WR1. It’s tough because the few WRs who have played at his size in the NFL have not been a good track record.

But an unprecedented Physical profile.

Taking his listed height and weight gives him a BMI of 23.

But what are the historical precedents of such a low BMI. pic.twitter.com/8kMWxIn9r5

So much history is stacked against Smith and the analytic crowd has been staunch detractors. The late breakout age, historically low success rate at his BMI, and how late he finally became the main source of targets – all of this tells us his chances of being successful are small.

There are always outliers, and I am hoping Smith is one. He has a well-developed all-around game, and if he can avoid big hits as much as possible, there is a great chance of him being the outlier. He will need to work less over the middle, and I can’t see a team using him on special teams in the NFL.

I’ve seen some crazy draft projections for Smith, anywhere from the Jets at number two overall to the third round. I think somewhere toward the end of the first round is most likely but if he went in the top ten I would not be surprised at all.

Where you drafting Smith?

As far as your rookie drafts, mid-to-late first round is the sweet spot. In Superflex, definitely closer to the end of the first round. Smith is going to be good but I also believe he will be capped at WR2 production whereas some wideouts in this class have more legitimate shots at WR1 production. If Smith falls into the second round of rookie drafts, I will happily take the shot. But any richer has me a bit apprehensive.

Smith was my favorite player to watch in 2020. He made many spectacular plays; it seemed like every week, he would have at least one jaw-dropping reception. I am hopeful he finds success at the NFL level and is the outlier – something tells me he will be. It will take a team employing him as the Crimson Tide did, a good amount of short passes where he can use his moves to make plays. Smith is polarizing, and I look forward to where he lands in the NFL Draft.

Check out our amazing film room by becoming a member of the #NerdHerd. We have about a dozen videos of Devonta Smith and more downloading every week for all offensive draft prospects!

🆕 Stumped who to draft in your C2C drafts? Here are some sophomore wideouts to target based on breakout age and market share who are set up for future NFL success.
https://www.dynastynerds.com/using-analytics-to-identify-sophomore-wr-breakout-candidates/