Dyami Brown is a wildcard of a prospect. @DynastyWildcat tells you why below! 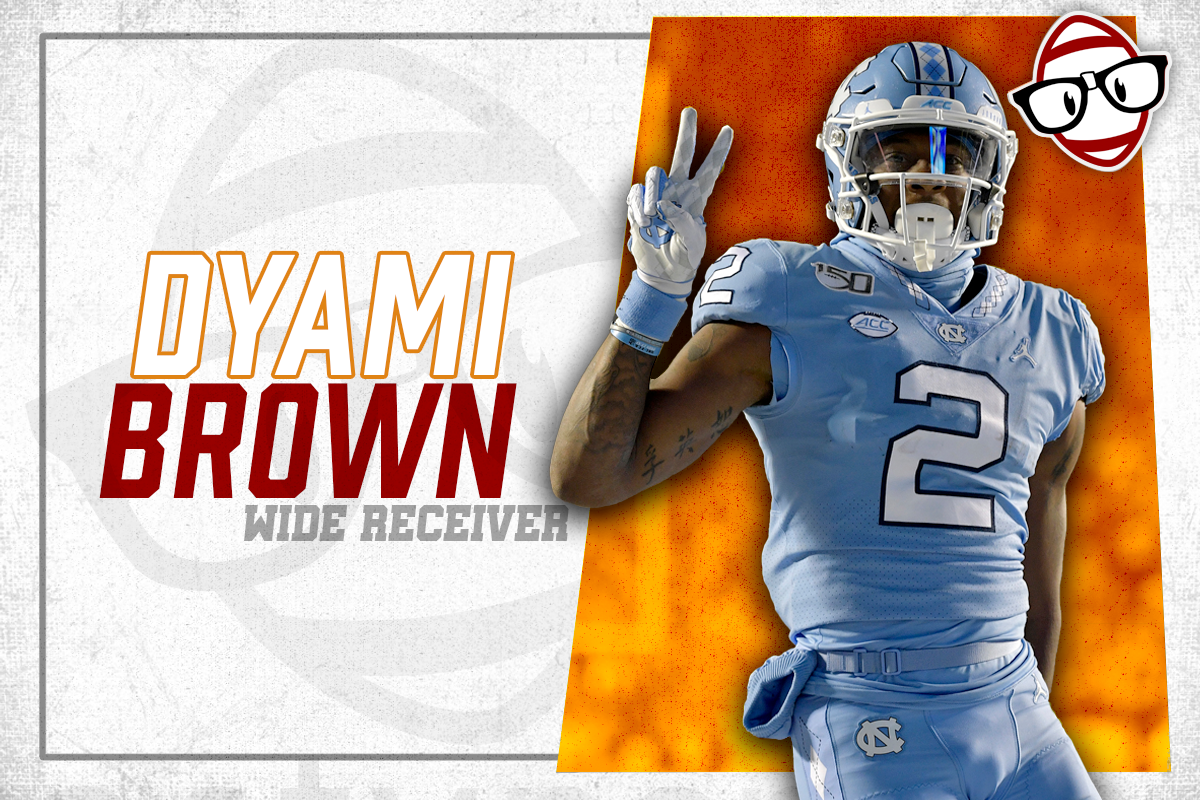 One of the more intriguing WR’s of the 2021 class is Dyami Brown. He possesses the size and stats a WR should heading to the next level. However, some concerns make him one of the more unpredictable players in this star-studded class.

Brown is a North Carolina man, born and bred. He grew up in the state and attended High School there at West Mecklenburg. During his time at West Mecklenburg, Brown developed into a four-star recruit. In his final two years of High School, Brown had 1,630 receiving yards and 24 receiving TD’s. After receiving offers from schools like Alabama, Ohio State, Michigan, and Virginia Tech, the 6’1″, 185 pound WR elected to stay close to home and attend North Carolina.

There, Brown stumbled out of the gates. He didn’t see much playing time in his freshman season, which equated to only 17 receptions, 173 receiving yards, and one TD. However, that didn’t hold him back. He entered his sophomore campaign as a man possessed. Brown tallied 51 receptions that led to 1,034 receiving yards and 12 TDs. He finished the season as a third-team All-ACC player. That momentum then carried into his Junior season (this year). He increased his receptions and yardage numbers but suffered from a slight dip in TD production. He posted a stat line of 55 receptions, 1,099 receiving yards, and only eight TDs. Brown also finished as first-team All-ACC.

An interesting stat of his to note is his yards per reception. Brown averaged 20 yards per reception or more in his final two years at North Carolina. An eye-popping stat that was at the top of his conference both years. It’s something to remember as we dig deeper into Brown as a prospect.

There is a lot to like about Brown as a prospect. He possesses many traits that make him such an intriguing prospect. So, let’s get into it!

Gets off the Line Quick

One of the most crucial parts of being a successful WR in the NFL is releasing quickly. The quicker you get off the line, the faster you get into your route and get the ball out of your QB’s hand. After watching a lot of tape on Brown, I can honestly say he gets off the line about as quick as any receiver in the class. It doesn’t matter if he’s getting pressed or if the opponent is playing off of him. Below is an example of this.

As you can see, he gets off the line fast and beats the press coverage. He then utilizes his speed to beat his man and makes the reception downfield. That wasn’t the only time you could find Brown doing this to a DB.

That’s easily one of Brown’s best attributes and will allow him to be effective from day one in the NFL. Many NFL DB’s love to press WR’s and get in their faces to prevent or delay them from getting into their route. It won’t be an issue for Brown.

This is where I’ll remind you of Brown’s insane yards per reception stats. He is a downfield threat. No matter where the ball is, Brown will find it and fight for it. To be a successful receiver at the next level, one must possess the ability to track the ball downfield. It’s why guys like Tyreek Hill and Will Fuller are so good at snagging deep balls. Of course, they have great speed, but that means nothing if you can’t locate the ball in the air and be able to track it into your hands. Brown possesses the speed needed to be a downfield threat and the ball-tracking ability. Below are just a few instances of Brown tracking the ball well and making the perfect catch downfield.

To my point earlier, Brown blasts off the line, he picks up speed quickly and flies by the defender. Then, as the ball gets thrown, the defender trips up Brown and knocks him off balance. Brown manages to stay up, find the ball in mid-air, and adjust his body to it and haul it in. This highlights Brown’s ability to track the ball and adapt to it while being interfered with.

It’s evident in the clip above that Brown will carry this attribute with him to the NFL. It will give him an avenue to playing time early on in his career as a deep threat. That’s a positive for someone who will be available later in most rookie drafts.

I wanted to highlight this as a strength because it will address one of my biggest concerns for Brown. On numerous occasions, Brown highlighted a quick twitch and giddy-up in his movement on his limited routes. For someone in a situation like that, this is one of the things you look for.

The ability to contort your body quickly while maintaining speed is crucial to route running. It’s one of the many things that makes Justin Jefferson, Minnesota Vikings rookie sensation at WR this season, so good. He has excellent footwork and moves quickly, adjusting his body in all sorts of directions to get open.

Brown highlighted his ability to do this on many occasions. However, it mostly came on short out routes, as you see above. However, it still highlights his quickness. It shows that he can improve as a route runner in the NFL.

Brown does a lot of things well, but his weaknesses stick out like a sore thumb. That’s part of what makes him such an intriguing, wildcard level prospect. Without further ado, let’s get into some of the more discouraging things regarding Brown.

This is the biggest weakness for Brown. It stuck out immediately when watching him. One play, he’ll make a helluva catch making his defender look foolish, then the next he drops a simple pass inside of ten yards. It’s so discouraging to see. Below is a video highlighting these struggles. You’ve seen the good catches like in the videos above, but here are just a few of the drops I witnessed.

Those drops came on back-to-back targets in the Miami game. It isn’t the only time he dropped passes on film, and it certainly won’t be the last. It will be imperative for Brown to land in a spot with a forgiving head coach. Leadership in the same vein of Tampa Bay Buccaneers Bruce Arians would potentially shatter Brown’s confidence after limiting his playing time.

I like Brown as a prospect and think he will do good things in the NFL, but not necessarily for your fantasy teams. He strikes me as a player that will be a deep-threat WR. He can develop as more than that if he can build his route running and catch the ball more consistently at the next level. However, it’s a long shot.

With that being said, he is an excellent WR to grab in the second round of rookie drafts. He is a player that will need time to develop. If he lands in the right situation, he could contribute as a deep-threat immediately with the right QB. Don’t get your hopes up though, his production will likely be unpredictable at best.

In the NFL, I project he will be a late day two or early day three pick in the NFL draft. With his speed, someone may reach on him earlier than that. However, with no combine taking place this year, I doubt it happens.

That leads to potential landing spots. The options of where Brown could go will vary a bit. I think he would be a great addition to the Green Bay Packers as a number two option opposite Davante Adams. Another good spot would be in Houston with the Texans, with the caveat of them still having QB Deshaun Watson. He would be an excellent replacement for Fuller if they let him walk in free agency. Don’t sleep on the Detroit Lions either. They may be looking to fill the void left by WR Kenny Golladay later in drafts, given the team’s needs at other positions.

Where can you get the Dynasty Nerds video cast, the Film Nerds, In My Defense, and more great video content? The Dynasty Nerds Youtube channel. That’s where. Click the link, subscribe, and make sure you don’t miss anything as ou prepare for your rookie drafts.

Does Cam Newton have a future as a starter in the NFL?
Way Too Early: 2021 Rookie RB Landing Spots