Elijah Moore enters the NFL Draft after a phenomenal junior season – is he getting enough hype? @FFPeeblesChamp breaks down the electric slot receiver 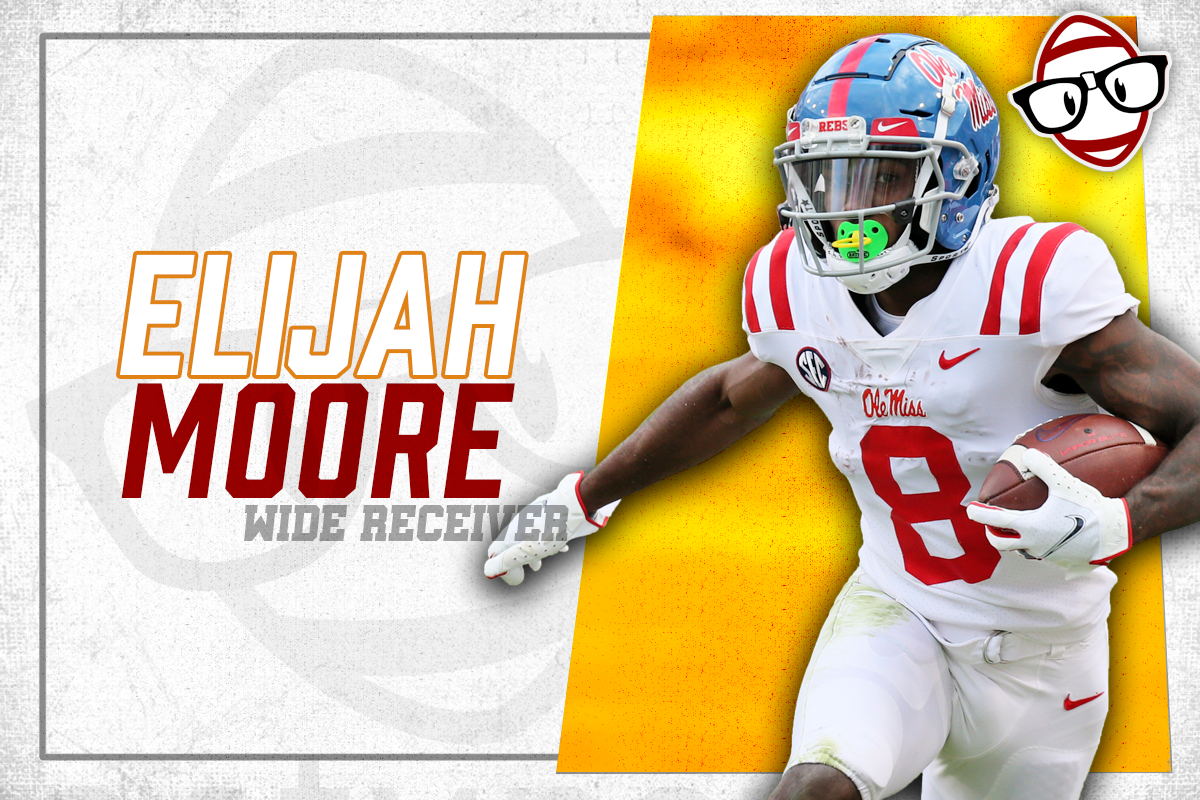 As a sophomore, Elijah Moore had a solid season, but the arrival of Lane Kiffin opened up the Ole Miss offense, and Moore had a huge junior season. He was one of the best receivers in the SEC and opted to enter the draft.

The 2021 wide receiver class is loaded, and the former Rebels wideout finds himself mired in a tier of talent with former five-star recruits and some huge names with higher profiles.

Moore was a four-star prospect from St. Thomas Aquinas in Fort Lauderdale, Florida, and chose Ole Miss over offers from Georgia, Alabama, Ohio State, and over 30 schools in total.

Statistically, the numbers he posted in only eight games of 2020 would have extrapolated to a truly great season and earned him first-team consensus All-American honors. He was first in the country in receiving yards per game with 149.1 yards a contest and also receptions per game with 10.8 a game.

The analytics of this season are quite spectacular as well – Moore posted a 37.75 dominator rating at the age of 20, and the market share numbers are ridiculous as well. He garnered 43.25% of yard market share and 32.26% of touchdown market share. The Ole Miss offense was more explosive under Kiffin, scoring 39.2 points a game. Moore was a huge reason the offense jumped from 82nd in 2019 to 14th in 2020 in scoring.

Moore profiles best in the slot due to his size at 5’9 “ and 185 pounds, and he wins early and often from the position.

Moore has amazing hands and rarely drops a pass. He catches away from his body, and his concentration in contested situations is exemplary.

I love the concentration to snare the pass just as it’s about to hit the turf. Then Moore pivots around and makes a few moves with head fakes to have the wherewithal to get a first down.

Moore’s footwork is quick and smooth. He loses almost no speed when cutting within his routes. He uses fast and precise motions to create better angles. It helps him off the line and throughout the route and makes him even more dangerous with the ball in his hands.

This clip shows some of Moore’s footwork as he has the ball in his hands. The versatility to take the ball in the backfield and shift through the first level of the defense is something many receivers aren’t asked to do. He cuts quickly and efficiently – little wasted motion.

Some slot receivers are used more to gather up short gains and first downs, and anything extra is just icing on the cake. Moore can provide more (sorry, had to do it) by ways of ability to run after the catch.

This run was another which started in the backfield but showcased the slippery moves after he has the ball. Once again – footwork, body fakes, moves without losing speed – it all packages together and makes him a dangerous receiver.

Finally, Moore’s short-area separation is a thing of beauty, and it will help him get on the field early at the next level.

Ole Miss WR Elijah Moore had a step or more of separation on 90% of his targets this season.

Off the line, footwork helps him avoid contact and sets up defenders. The moves inside the first five yards make him difficult to cover. Once he has the initial separation, Moore continues throughout the route with subtle movements. He is a technician in this area, and why he has been so successful.

Route running, release, and blocking are a few areas Moore needs to work on to be a better receiver.

The footwork mentioned above shows in the preciseness of the routes he runs, but his overall route tree is limited. On longer routes, his acceleration and burst aren’t utilized as he often will take time to build. He will need to learn to build the route quickly at the next level. And his skill set should allow him to run more routes, and a team should easily be able to help the skills develop.

The release is the most pressing area which needs improvement. The footwork will allow him to avoid being jammed at the line, but if a route requires more than a quick get off the line – his release can get impeded. If a linebacker or defensive back jams Moore, he can get really thrown off, and he needs to learn to work off the contact and still run the route.

Blocking and away from the play – Moore shows little effort, and an NFL team will not want to see this happening. He needs to engage as a blocker and contribute more when he doesn’t have the ball in his hands.

Moore is one of “my guys” for the draft this year and could develop into one of the most productive receivers in the class. He combines speed, hands, burst, and is dangerous after the catch. A team will need to work with him to develop his route tree, but he should see the field right away and contribute from the slot from day one.

A team will likely draft Moore in the late second or third round, which gets him the draft capital we would like to see to ensure he sees the field early. There are a few teams I would love to see Moore on: Jaguars, Patriots, Chargers, and Colts. Each team could use a versatile slot receiver and would open up the field for their quarterbacks. Moore could fill a Jarvis Landry type role, manning the slot and seeing a mess of targets.

In rookie drafts, Moore is currently being selected at nearly the same spot – second half of the second round, and I have seen him fall to the third in a few. Moore should test well at his pro day, and I could see offseason buzz finally anchoring him as an early second-round rookie pick. It will be dependent on landing spot a little and draft capital – if he falls in the draft, he will likely be a late second or early third round pick typically.

Some will fade Moore because he will be a slot receiver, and he’s a strong buy for me. He will get targets and contribute in year one, but his ceiling may take a few years to hit. The run after the catch ability will help him reach the end zone, complimenting the receptions and yardage, giving him a decent floor as well. Moore has the potential to be one of the top five scoring wide receivers in the class and is a value where he is currently being drafted.

Want to learn more about Elijah Moore? Check out the Dynasty Nerds Prospect Film Room as part of your Nerd Herd membership for just $2.99/month.