Frank Darby is one of the most intriguing sleeper wide receivers in the 2021 class. @dynasty_devil breaks down the electric playmaker. 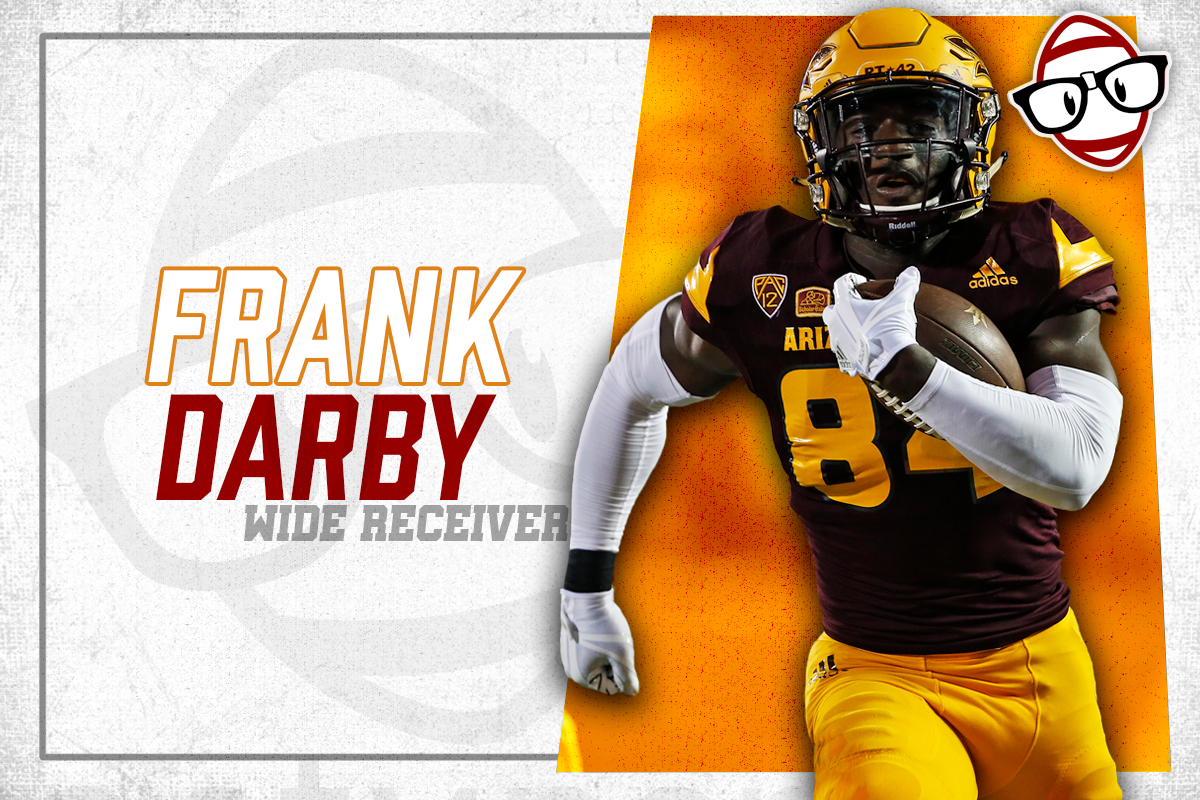 Frank Darby certainly won’t be a darling in the analytics community with the numbers mentioned above. Darby won’t wow you with his college production. He doesn’t have a fancy dominator rating or a high college target share either. He doesn’t even have a breakout age to go on. His numbers and metrics profile may not jump off the screen at you, but Frank Darby can impress you in other ways. Let’s dive in a little closer and see what there is to like about the wide receiver from Arizona State.

Most of Frank Darby’s career at Arizona State was overshadowed by star receivers N’Keal Harry and Brandon Aiyuk. Darby played briefly in his freshman year. In his sophomore campaign, Darby started to show great promise as a big-play threat. He finished the season playing in only 8 games but managed 421 receiving yards on 21 receptions. With Harry’s departure to the NFL, 2019 was the only year Darby played a full season. And he shined. Fellow teammate Brandon Aiyuk and Darby carried the wideout room for the Sun Devils. Darby finished the season with career-highs across the board in receptions (31), receiving yards (621), and touchdowns (8). Darby’s senior season was cut short after less than two games due in part to a rib injury.

It’s also worth noting that Frank Darby was a captain at Arizona State. His personality is gigantic. Frank is an energetic and charismatic leader. These are the kind of attributes that NFL teams will fall in love with.

Frank Darby’s greatest strength on the football field is his ability to make big plays. Darby carried a career 19.9 yards per reception average. He has a knack for consistently getting behind defenders. Here we see Darby solid off the line immediately, then a nice subtle double move to freeze the defender, and he’s gone.

Darby is sudden in his release packages off the line displaying solid footwork and technique.  His quick feet help create separation from corners, allowing him to make all these big plays. Darby has great game speed. He’s also underrated in terms of his contested catch ability. Here we see Darby keeping up with the common theme of getting behind defenders to make a big play. He shows great toughness making this catch.

Darby also has the ability to make plays on his own. The athletic Darby can create in open space and turn nothing into something. Here we see Darby’s YAC ability. He finds the soft spot in the zone and makes the catch. It doesn’t appear there is a lot there for him at first, but he shows off his athleticism, climbing laterally to get a huge chunk play.

Overall, Frank Darby is an exciting prospect. The numbers don’t tell you the whole story when it comes to Darby; you have to look at the tape. Darby likely won’t receive great draft capital, but with the right landing spot, I believe Darby can make an impact for a team. He won’t cost you much other than a late rookie pick. At that point, we are throwing darts for upside anyway. Frank Darby passes the eye test every time; make sure you keep an eye out on where he lands in the NFL Draft.

The Draft Picks feature is officially LIVE in the #DynastyGM. Choose whether to automatically sync your draft order (Sleeper, MFL & Fleaflicker), set the order manually, or use mid-round pick values across the board (useful for future years you can’t predict).

The DynastyGM is a GAMECHANGER. What are you waiting for? Get it today!