Jabril Cox took the long and winding road from North Dakota State to LSU and now heads to the NFL. @FFPeeblesChamp lays out his #IDPFF prospects. 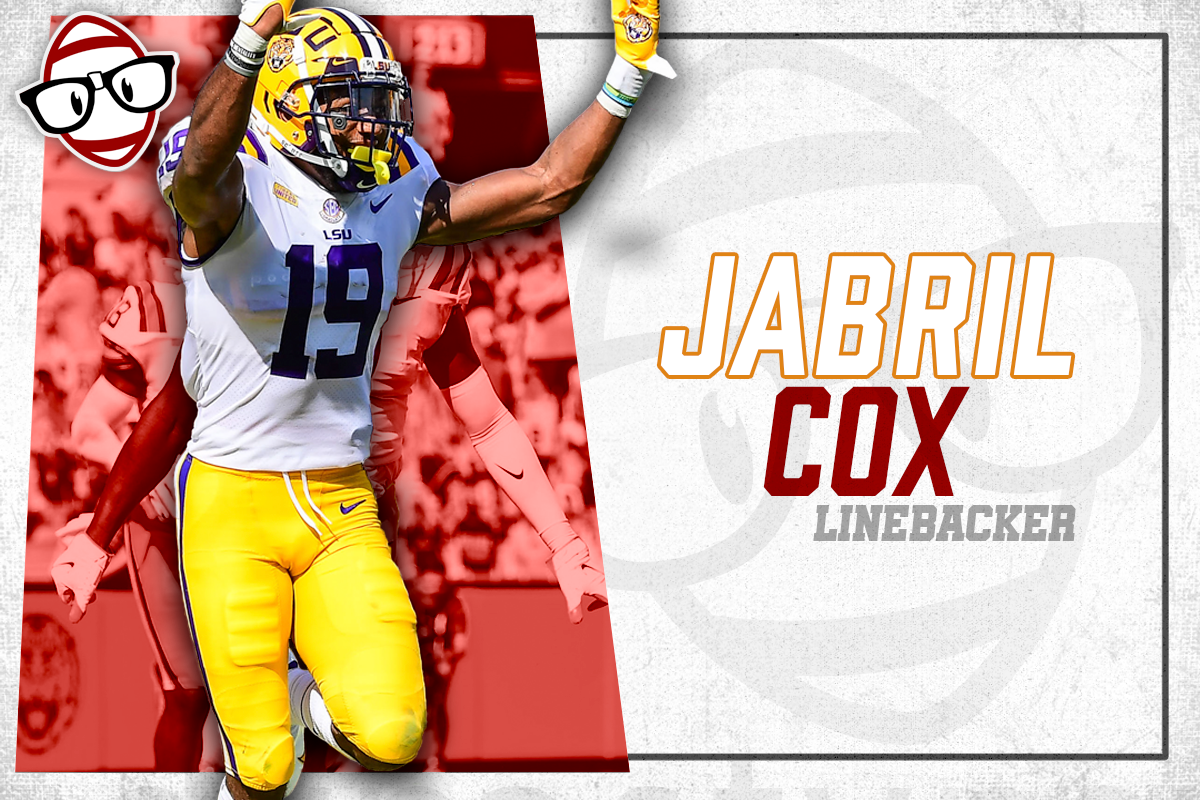 Jabril Cox destroyed the FCS over three seasons at North Dakota State and then chose to go to LSU as a grad transfer instead of entering the draft. Cox is a rangy disruptive linebacker with immense potential and should be drafted in the NFL Draft’s first few rounds.

Cox hails from Kansas City, Missouri, and was a multi-sport star at Raytown South High School. He started primarily at quarterback and was a dual-threat prospect before an ACL injury derailed recruitment. As a two-star prospect, he received little interest from schools and had offers from Illinois State, South Dakota, and Southern Illinois before accepting an offer from North Dakota State.

After a redshirt freshman season, Cox saw the field as a linebacker and began his trek as a three-year wrecking ball on FCS offenses. He earned Freshman of the Year in the Missouri Valley Conference with 75 tackles. Thirteen of them for a loss, four and a half sacks, one interception, and three fumble recoveries. The Bison won the first of three consecutive FCS National Championships in his first season as well.

Over three seasons, he added a Missouri Valley Defensive Player of the Year award in 2018 and finished his career with eye-popping stats. Cox finished with 258 tackles, 32 tackles for loss, 14 sacks, six interceptions, and 18 pass deflections. He could have declared for the 2020 NFL Draft; nobody would have questioned the decision.

Cox opted to grad transfer instead and chose LSU, where he quickly showed he belonged and led the Tiger defense in an overall down year for the program. In his first SEC game, he had six tackles, a sack, and returned an interception for a touchdown. Over the season, he chipped in 58 tackles, three interceptions, five pass deflections, and a fumble recovery on the way to being named a finalist for the Dick Butkus Award.

Cox is a fun player to watch. He covers a massive amount of ground quickly and has an infectious swagger to his game. He plays all over the field and usually, where the ball is – Cox isn’t far behind.

His explosiveness at his size is simply ridiculous. He has elite acceleration but doesn’t have great speed. Cox will track down a player from behind, but he’s best when he engages in the first ten yards.

This was probably my favorite play watching highlights of him while at North Dakota State. He is watching the play from the middle, and when the running back tries to reverse direction – Cox was like a heat-seeking missile, tackling the back for a big loss.

Here’s another instance of him recognizing the play, and when the receiver gets the ball, he closes a lot of space very quickly to stop him for a five-yard loss. I love how quickly Cox recognizes the play and covers the ground to force the loss.

With the explosiveness, he also has excellent lateral agility. He changes directions well, but any lag he makes up for by quickly accelerating when he gets facing the right direction. Cox moves side to side in coverage and is it’s evident how good it is watching him defend in zone coverage.

Watching this play, he follows the tight end and quickly gets from lateral movement into a running position to drag the tight end down for a short loss. Cox would often even jump the route, but he typically makes a takedown right after the catch if it’s caught.

Here’s what happens when you try to get cute and Cox is the coverage linebacker. He reads the quarterback and quickly jumps in front of the receiver underneath. It was an easy score for Cox in his first SEC game.

This is another favorite; I loved how Cox kept his feet moving and held the quarterback from running. When the QB finally was ready to throw, Cox exploded and absolutely leveled him. It was quite a bit of ground to cover, and he makes a smart read then finish.

As far as being a modern linebacker, Cox can fit the mold and be a versatile piece for defensive coordinators. He can line up deep enough to be in the secondary or get after the quarterback and anywhere in between.

He doesn’t rush the passer much, but you see how good he can be when asked to in this play. The lineman didn’t account for him, and Cox was so quick to the quarterback, he was there before K.J. Costello could set his feet. The play ended up being an intentional grounding and a huge loss for Mississippi State.

Jabril Cox carrying up the seam.

Cox was impressive at the Senior Bowl practices and drills last week. Here he is shown on a running back and is stuck to his hip for the entire route. Coaches were impressed with his versatility all week.

At times, he lined up as a nickel corner and was often effective, like in this clip above. I didn’t see it as much after Cox arrived at LSU, but it’s in his closet of tools and something he can do when asked. He’s a smart defender and reads quarterbacks well. He had nine interceptions in his career. I love watching him in pass defense; he is smart and instinctual.

I was impressed with the effort he put in, and he seems like a student of the game. He’s faced a learning curve going from North Dakota State to LSU, and the curve is about to get even steeper.

This play was another favorite of mine when watching him play. Cox covers a ton of ground quickly to hit the wide receiver shortly after the catch. The receiver slips the tackle, but Cox bounces right up and makes the tackle after a short gain. It was impressive to watch how quickly he went one way then bounces up and darts back the other to recover and still make the play. I love the effort.

Cox is smart, has a great motor, and his instincts are sharp at times – but with the speed and motor comes a reckless playing style. He overcame it often at North Dakota State; when he overplayed, there was often someone right there to clean it up. The reckless playstyle can be a detriment in the NFL when over pursuit of plays can lead to bigger gains. It is something he will definitely need to work on.

Jabril Cox has been on my radar for a few years, and I thought he made a mature decision to try to hone his game at LSU. It showed age beyond his years and gave him a chance to learn with coaches who could teach him more. Unfortunately, the Tigers’ defense was atrocious this year, and coordinator Bo Pellini got the axe after the season.

The linebacker position has evolved, and Cox has the skills and abilities to fit the mold of what the position requires. He can tackle, cover, blitz, and drop back in zone coverage as well. The versatility is coveted and will get him good draft capital.

Cox is routinely being mocked in the third round, but he could sneak into the second round. I don’t see many teams who wouldn’t use Cox’s skillset, but a few of my favorite landing spots would be Cleveland, New York Giants or Jets, and New England.

As far as IDP and a fantasy asset, it’s a little murky for Cox. I love him as a player but believe he will be a much better NFL player than a fantasy asset. He will give you some tackles as a floor but will be much better used in coverage, and hence, the tackle opportunities could be fewer. Cox could still be a decent LB3 with larger weeks’ capability of big plays like sacks and interceptions. I would be comfortable targeting him in the latter half of the second round and for sure in the third round of my IDP rookie drafts.

It may take him a few weeks or even a full season to see the field consistently. Cox is raw with tons of potential and hopefully isn’t thrust into too big of a role too quickly. He was one of my favorite prospects to scout, and I want to see what he can do with more coaching. Cox has the potential to be a good linebacker in the NFL for the next decade.