Javonte Williams is one of the most exciting running backs in 2021. Let @SportsfanaticMB tell you just how good he really is. 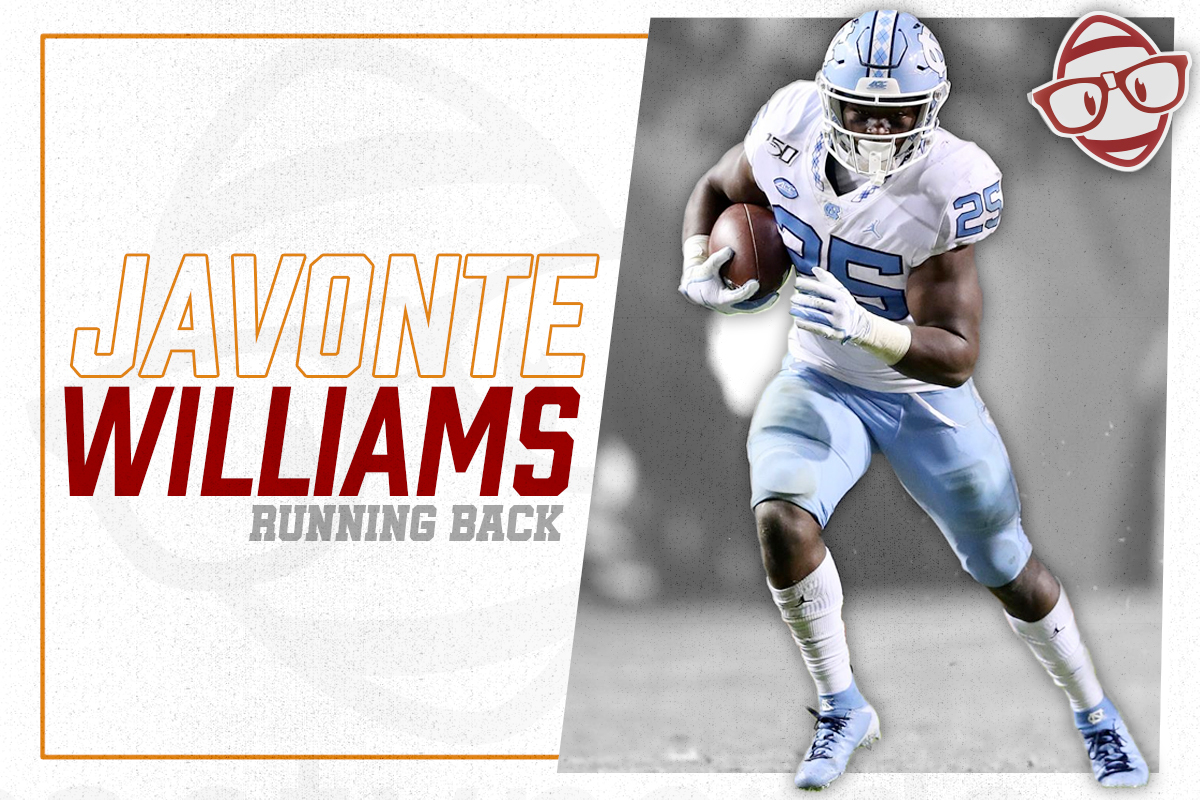 Javonte Williams attended Wallace-Rose Hill High School in Wallace, North Carolina. In his senior season, he rushed for 2,271 yards and 27 touchdowns. He was invited to the Shrine Bowl of the Carolinas and received one college offer to North Carolina, which he accepted.

Javonte wasn’t on the field much in his freshman season, rushing for 224 yards on 43 carries and five touchdowns in 11 games.

His production took a massive jump in his sophomore season while he split time with teammate Michael Carter. Playing in all 13 games for North Carolina, Williams put up some incredible stats not just rushing the ball but also in the receiving game, finishing with 1,109 all-purpose yards. Outside of the great stats in a timeshare with Michael Carter, what should have tipped us off to Williams great year, was that he finished as the fifth-ranked college running back in 2019 with a PFF grade of 89.8.

As his junior season kicked off with Covid, we still were not paying attention to Javonte. That quickly changed as Williams showed to be a true three-down threat out of the North Carolina backfield. He ran hard but was also elusive, forcing the most missed tackles in college football this year (75). What was more impressive was his ability to do damage in the receiving game. He put up incredible stats while still being in a timeshare with teammate Michael Carter. After by far the best season of his college career, Javonte opted out of the bowl game and decided to prepare for the NFL draft.

Here is a look at his advanced stats from his junior season in 2020.

Javonte Williams No Gain/Loss run percentage currently sits as the 6th best in this draft class. This statistic shows the percentage of his runs that were stopped at the line of scrimmage or produced negative yards on a run. Let’s now take a look at what Javonte does on the field that makes him so good.

Javonte consistently will follow his blockers and allow lanes to open before using his burst to gain yards. This is highlighted by his 7.3 yards per carry.

Williams possesses exceptional contact balance. He has a great low center of gravity, which helps him remain balanced through contact to pick up extra yards. He is rarely fazed by contact and breaks through most arm tackles.

Williams is quick and efficient with his feet and his cuts. He consistently does an excellent job of keeping defenders off-balance, keeping his pads square and level to get through tackles, and does a good job squeezing through holes created by his offensive line.

As a receiver, Williams shows soft hands. When you watch his tape, you’ll see that almost every time he catches the ball, he secures the catch and is immediately moving upfield.

Williams sees the field incredibly well and is almost always looking to set up his next move. He effectively presses holes and makes the right decision, whether between the tackles or pushing a run outside.

Javonte is knocked for not having breakaway speed. When you put on his film, you’ll find at times that even though he gets through the line clean and into the open field, he is brought down from behind.

Javonte Williams has risen up the boards with his play this season. Williams wins with his vision, contact balance, burst, power, and decision making as a running back. Add into this mixture the fact that he has some wiggle and twitch in his game, along with the receiving ability out of the backfield. Javonte is a true three-down threat. His decision making and one-cut ability as soon as he sees a hole open is some of the best in this class. He played in a very friendly offense for his skillset, so many will wonder if that could affect him transitioning into the NFL. I believe with his skill set, he should have no issues in the NFL.

Williams, in my opinion, is the second-best running back in this class. I do believe he gets drafted somewhere in the second or third round. With his talent and ability to be used on all three downs, I believe this means he’ll be a workhorse in the NFL. With his skill set, I think he’d be an asset on any team that he’s drafted on and fit’s any scheme in the NFL.

As for fantasy, we’ve seen running backs who can catch the ball have increased value. Even if he splits time in the NFL, we’ve seen he’s one of the better backs in college in a true 50/50 split. Javonte would be the second running back off the board for me in any draft at the moment and should be a first-round pick in all dynasty rookie drafts.

This completes my draft profile on North Carolina running back Javonte Williams. Continue to check back as new profiles will be released every couple days. If you want to see more of my work you can follow me on twitter @SportsfanaticMB, and on my podcast the Devy Debate and Fantasy Football Roundtable.