Jermar Jefferson is a running back that has been overlooked due to an injury plagued year. @SportsfanaticMB tells you why he might be the sleeper of this class. 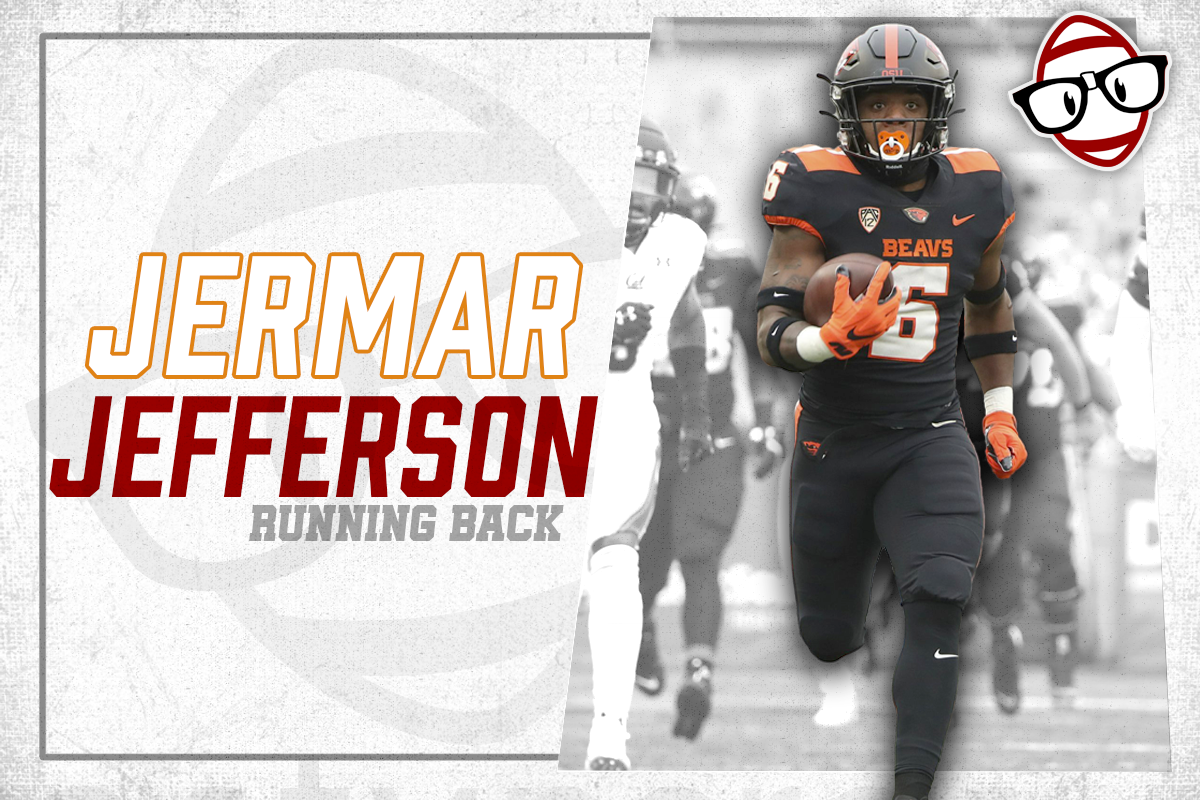 Jermar Jefferson started his high school years at Redondo Union High School in Redondo Beach, California. However, in his senior year, he transferred to Narbonne High School in Harbor City, California. Jermar ended up with ten different offers to play college football and decided to go to Oregon State. He enrolled and officially became an Oregon State Beaver on June 10, 2018.

Entering college Jefferson wasn’t expected to be the starter. However, an injury to then starting running back Artavius Pierce forced Jefferson into action. Jefferson went on to have an amazing season as a true freshman. In just his second game, he rushed for 238 yards and four touchdowns. He followed that performance up three weeks later with his career-high in rushing 254 yards and two touchdowns. Jefferson ended up finishing the year with 1,380 rushing yards and was named the Pac-12 freshman offensive player of the year.

Coming into his sophomore season, Jefferson was a player we all expected to continue to dominate on the field. After two games, Jefferson suffered an ankle injury. He ended up missing the third and fourth games of the season, and when he came back, he had been usurped as the starting running back. The previous starter whom Jefferson had replaced the year prior, Artavius Pierce, had taken over again as the starter. While Jefferson looked like he had struggled at times with his ankle injury, he was also splitting time with Pierce. He ended up with less than half of his rushing yards from his phenomenal freshman season.

As 2020 approached, many were down on Jefferson as a player because of the downfall in 2019. With the Pac-12 delaying the start of the season, it looked like Jefferson’s stock would take another hit, only playing in six games. Jefferson may have heard all the doubt sent his way and immediately came out and silenced his doubters. He started with four straight games over 100 rushing yards, and in just six games, had more rushing yards than his sophomore season.

Jefferson reminded us all of the player we fell in love with his freshman season. Including even showing us parts of his game we weren’t sure he ever had. With his stock increased back after slumping mostly due to injury in 2019. Jefferson entered the draft.

Jermar Jefferson’s No Gain/Loss run percentage currently sits as the fourth-best in the 2021 draft class. This statistic shows the percentage of his runs that were stopped at the line of scrimmage or produced negative yard runs, meaning Jefferson was one of the best in college this year in getting positive runs on his rushes.

The ability to use that jump cut and get outside on the run here is crucial for a running back coming into the NFL. This, paired with his vision, is what makes Jefferson a truly scary runner.

One of Jefferson’s best ability is his vision. Jermar consistently scans the field and when he sees a backdoor open if the run looks to be stopped, he consistently hits the cutback lane for positive yards.

Jefferson is a very physical runner for his size. Even when he’s hit he does a good job using his lower body strength to keep his legs moving for extra yards.

The biggest questions surrounding Jermar Jefferson are his size and long speed. Even though Jefferson runs with some physicality, he is a bit smaller than others in this class. The questions around him would be, can he be a workhorse back at the next level at his size? He has also been dinged for not having long speed. He has shown more speed than many thought he had this year (see Oregon clip above for a touchdown.)

Jefferson is an all-around running back who does have some great traits moving into the NFL. When I scout a running back, I look for vision and lateral speed. Jefferson is one of the best in this class in both. His ability to make one cut and run is effective in gaining positive yards on runs. Jefferson likely won’t play many away at the Combine, but his all-around skill set is intriguing. I truly believe he’s a running back who will end up as the starter for the team he ends up with and should be a steal in rookie drafts.

Due to the NFL approach to running backs, I don’t expect Jefferson to be drafted in the top two rounds. He currently sits as my running back five in this class, so I expect him to get drafted somewhere in the fourth or fifth round. There are two teams in that area I believe he’d be a great fit for, the Seattle Seahawks and the Houston Texans.

For fantasy, I believe Jermar Jefferson likely falls into the low-end RB2 high-end RB3 group. If Seattle or Houston draft him, that likely will increase his stock some just due to how much both franchises run the ball. Depending on his draft value and where he is drafted to, I believe Jermar will likely be drafted toward the bottom of the second beginning of the third round in rookie drafts.

This completes my draft profile on Oregon State running back Jermar Jefferson. Continue to check back every week as we will continue to watch the stock trends of devy players moving throughout the year. For all my devy content you can follow me on twitter @SportsfanaticMB, and on my podcast the Devy Debate and Fantasy Football Roundtable.