Ohio State LB Baron Browning has been generating a lot of #FFIDP heat. Let @Spydes78 tell you why this Buckeye might make a nice buy! 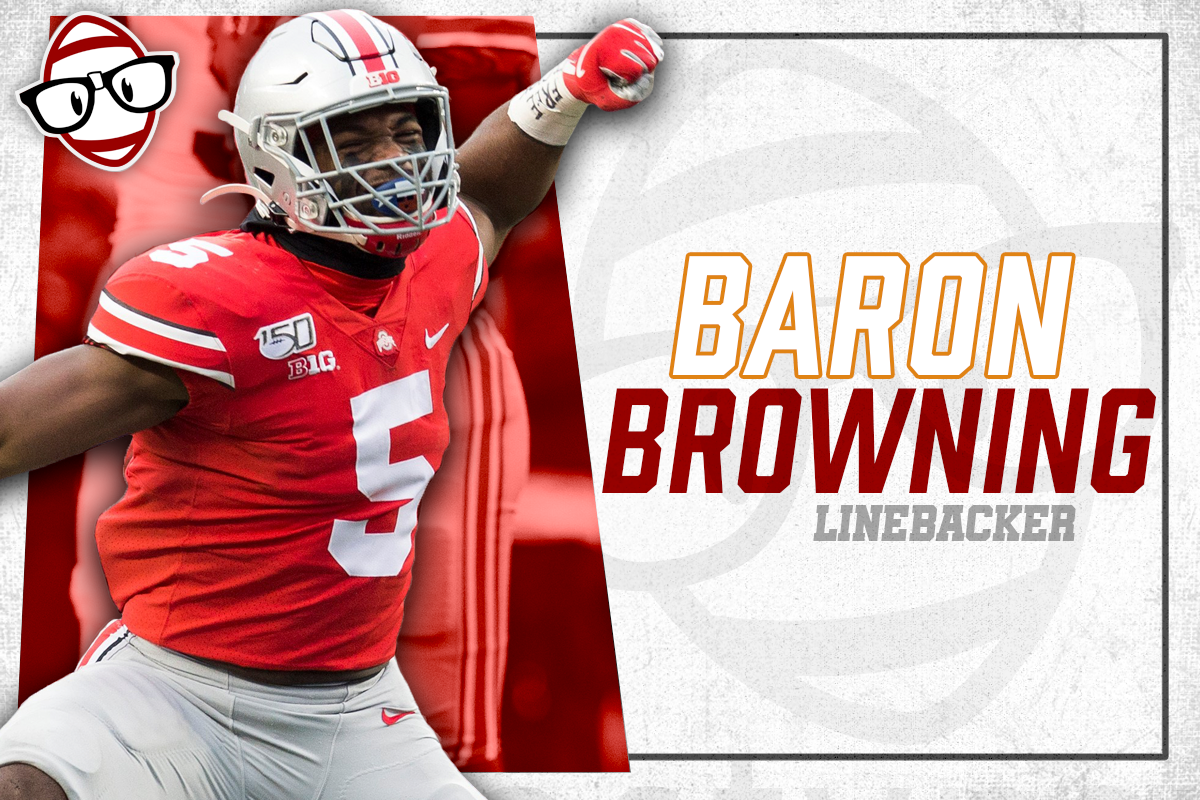 With the calendar turning to February, the NFL Draft hype machine is officially all gassed up and ready to roll. As a wintry rite of passage, dynasty enthusiasts hunker down and faithfully scrutinize rookie prospects on both sides of the ball in the hopes of claiming even the slimmest advantage over the competition. And inevitably, as this process unfolds, some previously unheralded players become the darling of the community, with a fervor only intensifying as exaltations reverberate through the echo chamber of the establishment.

As your keen intuition may have suggested, this particular installment of our ongoing draft profile series centers around precisely this type of hyped player—the dynamic linebacker, Baron Browning, of Ohio State University. Like a swiss army knife of defensive talents, Baron recently caught the eye of the NFL (and, in turn, the fantasy community) with a strong showing at the Reese’s Senior Bowl. So, is all of the recent attention merited? Can Browning, indeed, bring value to your IDP roster? Or is he just the draftniks’ flavor of the week? Let’s dive in, shall we?

It’s become cliché, but ask any NFL rookie about the difference between the college and pro game, and ‘speed’ in some variation will surely be evident in their answer. Plays simply happen faster on Sundays, and defenders need to have the requisite quickness to succeed. From the film, you can clearly see that Browning has precisely this type of burst in his toolkit. As evidence, take a look at the clip below collected from the 2019 Fiesta Bowl. Watch as Browning identifies the sweep and chases down the ball carrier for negligible gain. That ball carrier who was tracked and dispatched of, despite an advantage of momentum? None other than Travis Etienne, a running back with unquestioned, elite acceleration.

It’s no secret that the NFL has, in recent years, placed a premium on versatility. Logically, the more you can do to help your team, the more valuable you will be to your organization. In this regard, Browning is sure to be an extremely attractive prospect to defensive scouts. During his college career with the Buckeyes, Browning showed an ability to contribute at any of the linebacker positions (weak side, strong side, or middle). But he didn’t merely occupy these roles when deployed all over the field. He excelled. Here are just a few of the tools that he exhibited to highlight his versatility:

Opposing quarterback getting a little too comfortable in the pocket? Time to dial up a blitz and heat things up in that backfield? Browning is ready, willing, and able to crash the party. With a long, athletic frame (6’3”, 240lb) coupled with the aforementioned speed, Baron can pose quite a challenge to offensive blocking schemes. Watch in the clip below as he keeps the offensive tackle at bay with a long wingspan and then converts his impressive speed into a sack of blue-chip quarterback prospect Trevor Lawrence.

As a linebacker, coverage deficiencies will quickly make you the target of NFL offenses. In recent years, teams have increasingly utilized ‘12 personnel’ featuring two speedy tight ends to exploit just such an advantage. Thus, the ability to cover is paramount for a linebacker prospect. In his Ohio State film, it is evident that Browning frequently drew coverage assignments, particularly against top tight ends. Much like his pass-rushing abilities, Browning uses his size and speed attributes to excel in these assignments as well. Watch him win the matchup below against Penn State’s Pat Freiermuth, a highly regarded tight end prospect. Notice how he keeps Freiermuth in front of him throughout the play, all while maintaining sufficient ball awareness to complete a leaping pass break-up.

Read & React:  One criticism of Browning is that he sometimes seems to have difficulty diagnosing a play. Perhaps this deficiency is an artifact of Browning being interchanged across the defensive alignment, which has not afforded him the luxury of specialized depth in his preparation. He certainly has the skill set to function as a middle linebacker in the NFL, and, in fact, he was featured in this role (among others) during the recently completed Senior Bowl showcase. However, the mental aspect of his game is something coaches will want to see honed if he is to succeed as a ‘Mike’ at the next level.

The clip below is an ideal example of this concern. Note how he misreads this option play against Nebraska by biting on the fake handoff and incorrectly taking an inside approach angle. This allows the quarterback to bounce the keeper to the outside en route to a score. Given that the interior was amply defended, Browning would have been better suited to maintain the edge of the formation rather than succumbing to the temptation to crash the pocket aggressively.

After a comprehensive review, I completely understand why Baron Browning has generated so much contemporary excitement in the IDP community. He is a multi-tool linebacker prospect that to put it bluntly, is just plain fun to watch. His size and speed characteristics are ideally suited for the pro game. Baron has uncanny versatility, making him a valuable chess piece for defensive masterminds around the league. With top coaching and a more defined role, Browning should be able to eliminate hampering mental errors.

Browning is currently projected as a potential Day 2 selection in the NFL Draft. Because of his versatility, he will likely be attractive to all teams, regardless of their base defensive front. Pay attention to his landing spot, as it may indicate his initial linebacker role, inside or out. Either assignment would hold value. However, a ‘Mike’ job could spike his value a bit due to an increased tackle exposure. I would currently advise that you target Browning with a 4th round rookie pick, at the highest. Although strong NFL draft capital and continuing buzz may force that evaluation northward as we move towards the Spring.

Thanks for reading through this spotlight on Baron Browning. I thoroughly enjoyed bringing you this piece and would love to continue the conversation on this unique prospect. Please feel free to comment below or contact me @Spydes78 on Twitter. And also, stay tuned to @DynastyNerds for a steady pipeline of content from our eminently qualified staff. Together we will carry you through your offseason. Enjoy the grind!