Should you be targeting Parsons in your IDP leagues? @FFPeeblesChamp has the deets you need. 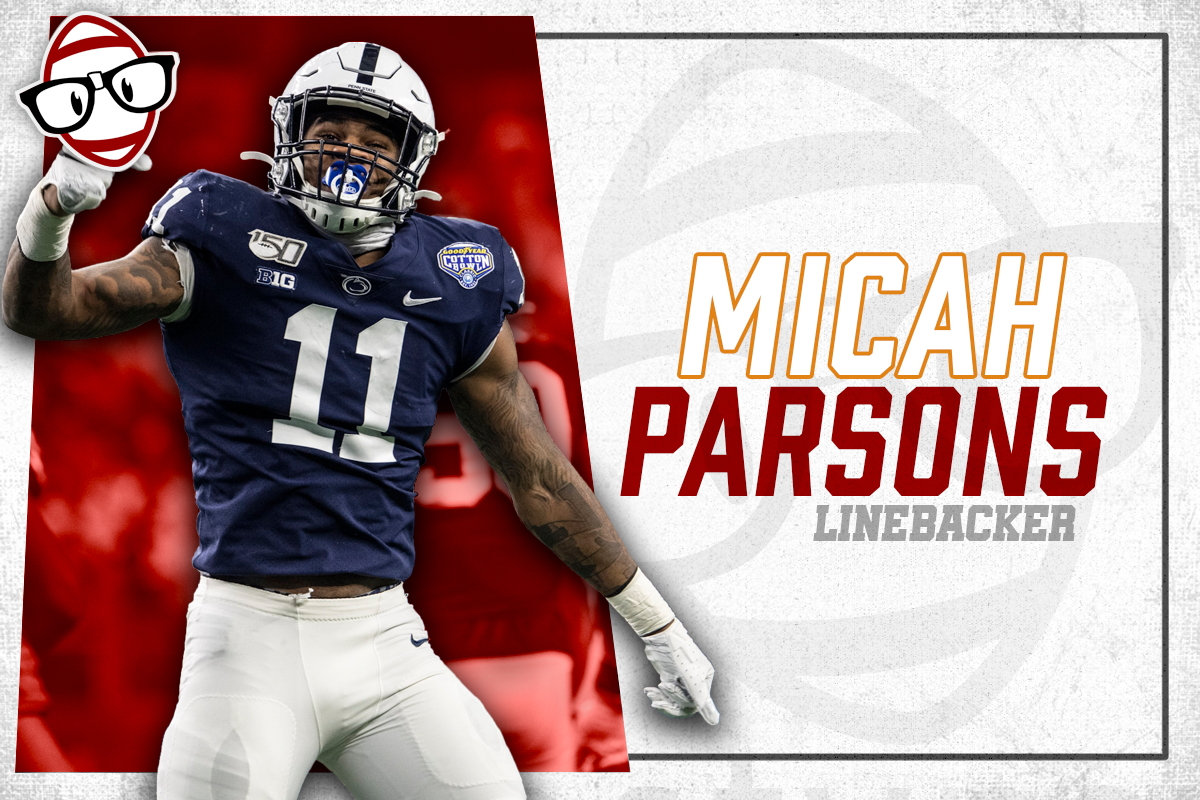 The latest in a long line of Penn State linebackers, Micah Parsons could be the first defensive player taken in the 2021 NFL Draft. He opted out of the 2020 collegiate season but his 2019 was an impressive display of his versatility. He’s a true three-down linebacker who can cover, tackle, and force turnovers.

Parsons entered Penn State as part of the Class of 2018 and was a five-star defensive end – the fifth highest ranked player overall with a 247Sports composite score of 0.9982. Hailing from nearby Harrisburg in Pennsylvania, he chose the Nittany Lions over Georgia, Ohio State, and Oklahoma – there were offers from nearly every major college program.

Parsons quickly established himself at linebacker in Happy Valley, tallying 82 tackles to lead the team despite only starting one game. He became the first freshman to ever lead Penn State in tackles.

His prolific sophomore season established him as one of the best defenders in college football. He tallied 109 total tackles, five sacks, and four forced fumbles on the way to being named a consensus All-American. He also won the Butkus-Fitzgerald Linebacker of the Year award, capping off the year with an amazing performance in the Cotton Bowl.

With the uncertainty over the summer, Parsons opted out of the 2020 season to train and maintained his out status after the Big Ten season decided to play. Several other Penn State players had opted out but returned and the Nittany Lions struggled without their stars.

Parsons is as close to a complete linebacker as it comes, he does so much at an elite level. It’s difficult to pick apart his game and he is all over the field – making plays and wreaking havoc.

At 6’3″ and 245 pounds, Parsons has prototypical linebacker size. He can take down a tight end easily and big enough to have a shot when engaged by the hosses in the trenches.

The speed and range are on full display in this short clip from @BradKelly17. Parsons tracks down the ball carriers through a mess of traffic while maintaining speed. Incredibly impressive few plays.

Parsons recognizes the play is a run by the quarterback and he covers seven yards in approximately 0.23 seconds (timed by Pro Day scouts). He accelerates quickly and covers ground very quickly.

Parsons is best standing up as an outside linebacker but often manned the middle and occasionally lined up outside on the line. He is great in run support but has the speed to cover running backs and tight ends. He can really get after the quarterback when asked.

I love seeing him close to the line like this and embarrassing the running back assigned to protect his quarterback. Parsons is so quick and versatile, he is going to be a valuable chess piece at the next level.

In coverage, Parsons often slid back into the middle and occupied the zone there. I’d like to see a bit more work in covering backs out of the backfield but he has the speed and footwork to be accomplished there.

Here he is dropping back while reading the quarterback, jumping in front of my boy Antonio Gibson, and nearly getting an interception.

Micah Parsons is very smart and instinctual in zone coverage

He does a great job picking up the post and deflecting the pass here pic.twitter.com/n4zODlpqlS

Here is another good example of how intelligent Parsons is when he is in zone coverage and protecting the middle of the field. He watches the eyes of the quarterback and bats down a pass intended for the wideout – stopping a big gain.

All of the impressive physical traits blend together with some special instincts to make Parsons such a nasty defender. He knows where to be and how to get there as quickly as possible more times than not.

Watching Parsons sift through traffic then slow for a moment to let the play develop to where he can fully disrupt it is a thing of beauty. This game versus Memphis was a showcase of all he could be, it was one of the most dominant defensive performances I have ever seen.

The big play from the same game – watch Parsons close in on Brady White and force him to errantly flip the ball to the Penn State defense, leading to a defensive touchdown. Parsons is a true disrupting force.

Discipline is the main thing I saw in which Parsons could use any work. He can focus on one thing and can be caught out of position. While I love his instincts, at times they lead him to getting burnt. Play action passes and a quarterback who uses their eyes well can bait and manipulate Parsons out of position. It isn’t a consistent thing and it doesn’t happen a lot but if offensive coordinators figure out how to use those “tells”, Parsons can be baited out of plays.

As good as he is at getting to the point of disrupting plays, I would like to see him be a better tackler. At times, he will set his feet and wrap up a tackler as imposed to going forward and laying the lumber. A dynamic runner will exploit this if he doesn’t become a more assertive tackler.

The modern NFL defense salivates over linebackers who can move around and cover while also punishing runners and attacking quarterbacks. Parsons’ speed gets him all over the field and his instincts lead to disruptive plays and turnovers. His game reminds me a lot of Darius Leonard’s and Parsons could have the same impact truthfully.

In April, Parsons will likely be the first defensive player taken and should go within the first ten picks. It’s tough to gauge if opting out of 2020 will hurt his draft stock but I don’t see it hurting. He’s a special player and couldn’t have really helped his draft stock much by playing in 2020.

It truly was fun to watch game tape of Parsons, he flies all over the field and is everything you would want in a linebacker. I read a comp to Luke Kuechly somewhere and I loved the comp. Kuechly is one of my all-time favorite players and the player comparison is a compliment. Parsons is going to be a top-five linebacker in the NFL for the next ten years.