Overshadowed by teammate Javonte Williams, Michael Carter outproduced his counterpart and is poised to be a draft day steal. But what are the risks involved? @DynastySlabs breaks it down 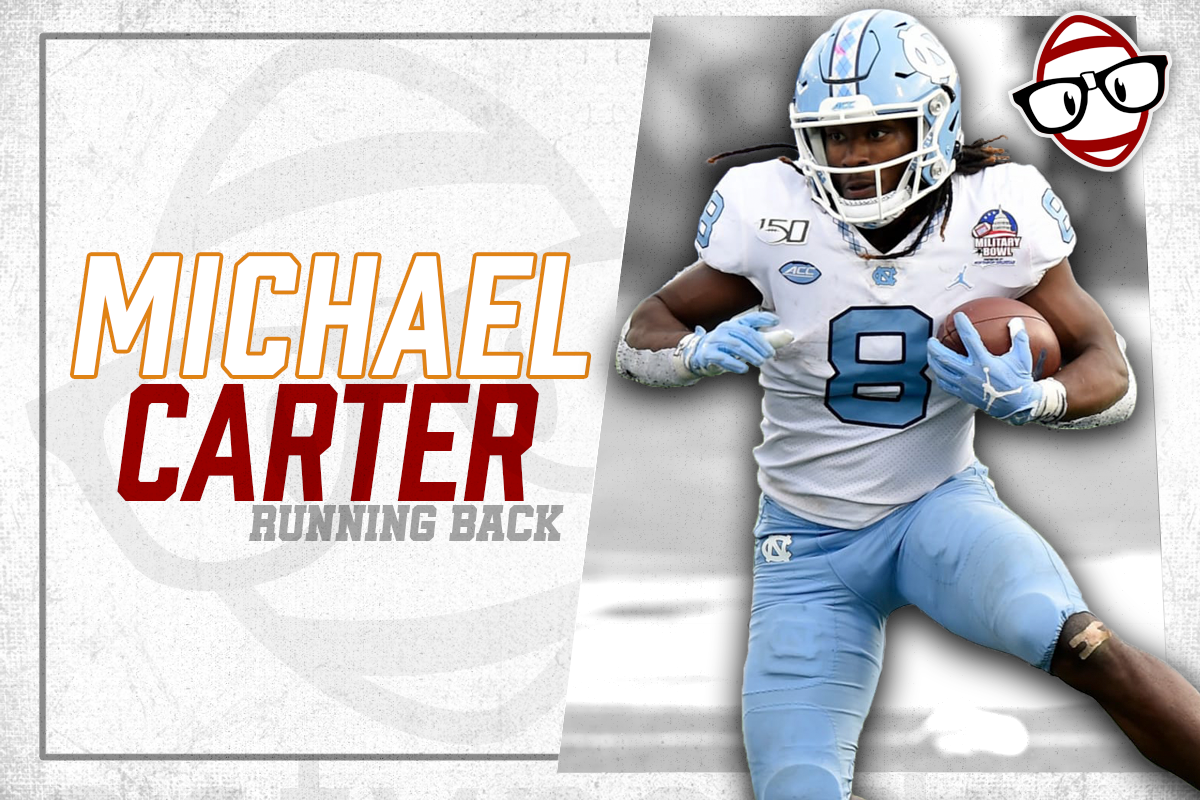 The UNC running back standout hails from Navarre High School, located in Navarre, FL. Coming out of high school, Carter was a 4-star prospect and committed to play at the University of North Carolina in Chapel Hill.

His first two seasons at UNC, Carter flashed some of what made him so highly touted entering college. Carter scored nine touchdowns on only 108 touches as a freshman. He followed that up as a sophomore by averaging over seven yards per carry. Once again, Carter only had 84 carries and was only one of the many mouths being fed out of the backfield. After being a bright spot his first two seasons in a muddied backfield on a bad (and I mean BAD team), Mack Brown took over the program.

Carter found more touches and success in his Junior and Senior seasons alongside fellow running back Javonte Williams. This culminated in other-worldly 2020 seasons for both backs.

Williams scored an incredible 22 total touchdowns, garnering recognition and plenty of pre-draft hype. Yet, it was Carter who led the Tar Heels in rushing yards, yards per carry, scrimmage yards, and scrimmage yards per touch. And all this, with one LESS touch than Williams!

So, why the gap in perception between the two backs? Did Williams’ nose for the end zone put Carter in his shadow? Are there reasons for concern with Carter’s game? Does Carter have what it takes to make an impact for your fantasy team? Let’s take a look.

In his time at UNC, Michael Carter has never had more than 25 receptions in a season. However, this is due more to his never having the backfield to himself than any lack of ability. Carter doesn’t just have good hands; He also flashes some really great route running as well as an understanding and feel for how to set defenders up.

You can see here, Carter drives the DB back, freezes him with his footwork, and then breaks sharply outside. From there, his elusiveness takes over, which we’ll take a look at in a minute.

Here, Carter disguises a wheel route as a flare right out of the backfield. He keeps his eyes on the QB, convincing the defender to step up and plant his feet. When this happens, Carter exploits the error, using his burst to blow by the linebacker on a wheel route

Carter led the ACC and was 5th nationally in yards from scrimmage in 2020. This is due in large part to his elusiveness and burst, which oftentimes work together in tandem. You can look no further than the two route running clips above to see each of these at work. In clip one, after the catch, Carter bursts towards the sideline, slipping through an outstretched arm and getting upfield. In the second clip, his burst is on full display as he burns the defender down the sideline after lulling him to sleep. But in case you need to see more:

Carter is patient, follows his blockers outside, and when he sees the hole, BOOM! Carter hits this hard, hurdling a would-be tackler and breaking off a huge gain.

This elusiveness and burst also earned Carter a spot on the return team for UNC. This versatility is going to be a major plus for Carter at the next level. Carter is likely going to be a 3rd-4th round pick, and his ability to make plays in the return game could get him on the field early. Even if he isn’t a lead back immediately, this will give Carter a chance to flash what makes him special and potentially earn him more touches.

Carter also displays above-average vision. He processes the defense quickly, knows his options, and is able to cut and weave through traffic with ease.

Carter’s vision is not perfect. At times he can outrun his blockers, and every so often, he is too quick to cut back or bounce a run that would have developed if he had waited for one more beat. However, these are not huge concerns to me, and I believe his vision will be an asset in the NFL.

Carter is not a perfect prospect, though. If he was, we would be talking about him going much earlier in the draft. So, what are some of my concerns?

Carter’s speed is adequate, but it is not game-breaking. Coming out of High School, he was clocked at 4.7. He looks more like a 4.5-4.55 to me on tape, and while that wouldn’t kill him, it also limits him at times. Don’t get me wrong, Carter is quick (see “burst” a few paragraphs up), but once he is in the open field, he can be caught.

Carter makes a great read, bursts through the hole, steps through a tackle, and makes for the pylon. However, he isn’t able to get there. 23 steps up towards the tight end, pulling right when the ball is snapped. Carter sees him and cuts left, and yet 23 is able to recover and make the tackle all the way across the field.

Ultimately I doubt that his speed will be the reason he makes it or not in the NFL. However, I do think it limits his upside. If a run is blocked well or there is a defensive breakdown, he absolutely has enough juice to take it to the house. But, I would not look for him to regularly beat defenders who have an angle on him, and he may even get caught from behind at times at the next level.

At 5’8 199, Carter is by no means a power back. He is absolutely a fighter, scratching and clawing for every yard, but he does not run many people over.

Carter does a great job here of stepping out of the first tackle attempt but is met at the goal-line by a cornerback and is unable to push the ball across. Instead, he is actually driven back a little.

Again, don’t misunderstand. He is very elusive. He has a great feel for the flow of the game and steps through a lot of ankle/arm tackles. However, he does not throw a ton of stiff arms or run through larger defenders. This could limit his red-zone usage in the NFL, and it absolutely contributed to the touchdown discrepancy between himself and Javonte Williams this year.

So, who does Michael Carter remind me of entering the NFL?  This player came in at 5’8 206, ran a 4.58 at the combine and was drafted in the 4th round out of FSU…Devonta Freeman!

Freeman has incredible burst and vision, weaving through the defense like I see Carter do so often.  As I stated before, I believe Carter would run in the mid 4.5’s if there was a combine this year.  I also see so many similarities in their pass catching ability and playmaking on special teams.

Freeman finished as an RB1 twice(2015/2016) and an RB2 once (2017). Can you say #2-3yearwindow? And I think that is absolutely Carter’s ceiling given the right situation and opportunity.

Freeman did add some muscle once he was in the NFL and also looks faster in his pro tape than he was in college. If Carter can follow that same path, adding muscle and working on his speed, he’s going to be well on his way to a successful career.

Michael Carter is someone I believe can contribute to not only an NFL team but your fantasy team as well. His versatility on special teams and in the passing game is going to allow him opportunities to prove himself.

However, I am going to be watching his landing spot pretty closely. While I believe that he has the ability to contribute, I don’t believe he will be drafted to be the lead back from day one. Meaning, there will most likely be an incumbent starter in front of him initially. Depending on who that incumbent starter is, Carter could rise for me to become an early second-rounder in 1QB leagues or fall out of the second round completely.

If/when he gets the chance, he can carve out a role for himself, but you may want to set your expectations for him to be a stash or potentially a third-down back in 2021. Carter will be the definition of #2-3yearwindow, but given the right system and opportunity, it could be a great two or three years.