Gage Bridgford (@GbridgfordNFL) looks at one of the top running baks in this year’s draft in Alabama’s Najee Harris. 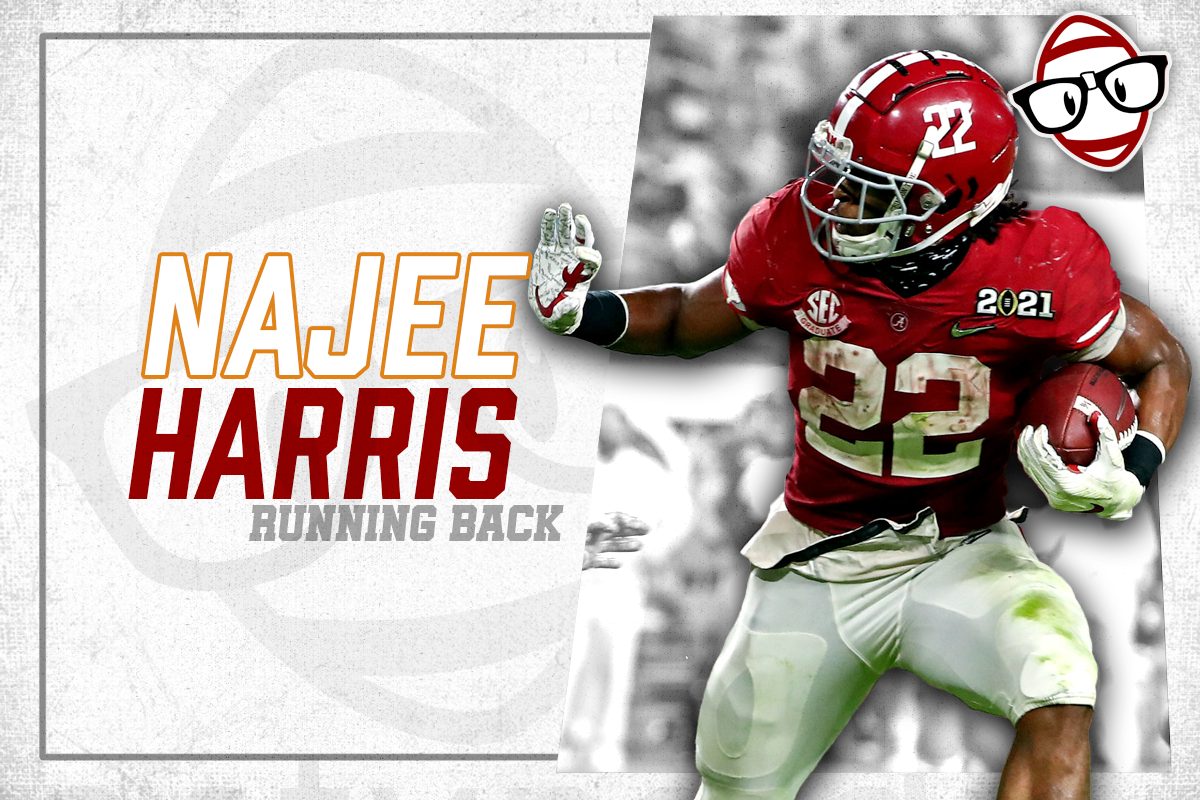 More often than not, when you look at the top high school football recruits on a yearly basis, you’re going to see a lineman or a quarterback. In the class of 2017, Najee Harris was the top recruit. Bryce Brown, who played at the University of Tennessee, was the only other running back to be the top recruit in the country.

There’s a slight difference between Harris and Brown. Brown had 104 carries in college. Harris has had more than that in each of the last three seasons. Brown also never had more than 460 yards in a season in college. Harris had at least 370 in all four seasons and 783 or more in three out of four seasons. Since Harris arrived on campus, he’s been a standout running back. He showed out despite being behind two players that were starters in the NFL in the 2020 season in Damien Harris and Josh Jacobs.

Harris was recruited from coast-to-coast. He had 29 schools going after him, and he could have been the starter from Day 1 at most of those schools. Instead, he went somewhere that already had a five-star running back locked into the roster along with the budding Jacobs. His work ethic is second to none, and he has no problem when you put competition in his way because he wants to be the best at what he does.

After a quiet freshman season, Harris steadily built his resume up. He averaged over 6.0 yards per carry in his sophomore season that saw him outperform Jacobs and Damien on a per-carry basis. Following that season, he was the clear lead option, and he was bowling over SEC defenses every week en route to back-to-back 1,000-yard seasons. He also added a total of 50 touchdowns over the course of those two seasons, with 39 coming on the ground.

One of the major things to watch will be how teams assess his mileage. He’s had 718 touches over the course of his four seasons. We’ve seen a high amount of work scare some teams off of players in previous drafts. The most recent example of that happened in the 2020 draft with Wisconsin running back Jonathan Taylor, who had 968 during his four seasons in school. Harris doesn’t possess the same top-end athleticism as Taylor, but he also has 250 fewer career touches. That will be a key to watch for him heading into the draft.

When Harris elected to return to the school, it was seen as a bit of a shock. As this season progress, it became a big win for two reasons. For one, he solidified his status as one of the top two backs in this class rather than being in a really top-heavy class last season. Additionally, his receiving game took a good step forward this year. After catching 37 balls through three seasons, he caught 43 in his final year. Teams are continually trying to get their running backs involved in the passing game, and Harris’s improvement in this area shows he won’t be a liability for a passing attack.

Harris is a better receiver than he gets credit for, and he flashes those skills and more on this play. When he comes out of the backfield, he gets the pass, and he has 40 yards between him and the end zone. Despite three different defenders getting a hand on him, he goes through, over, and around all three of them. Harris is a load to bring down, and that hurdle is just an extra bit of talent most guys his size don’t have.

We just talked about Harris being a pain to bring down, and that was absolutely true on this play. He should have been tackled four different times at or behind the line of scrimmage. Instead, he keeps fighting and ends up with a gain of two yards. He’s strong enough to break through the tackles, but he’s athletic enough to get a full head of steam going forward.

In this class, the top two backs, Harris and Travis Etienne, are split into two styles. Harris is more power, and Etienne is more speed. That doesn’t mean Harris doesn’t have speed, though, because he leaves the defense in the dust on this one. He gets that slight crease off the left side, and he sprints past corners and safeties alike. You shouldn’t expect him to win any track meets, but he has the speed to avoid getting caught from behind.

This is an area every rookie running back has that gets heavily scrutinized. It’s all about pass blocking. Harris has the size to take on incoming linebackers, and he’s willing to do so on plays like this. With a 240 lb linebacker coming right at his face, he steps up to give his quarterback time to extend the play and keep the drive alive. The quicker he shows that he can be trusted in this area will mean more snaps overall.

Harris is a player that everyone is going to think ahead of the draft. He’s a fundamentally sound running back with a track record of success while avoiding injuries despite heavy workloads. What else do you need to see? Answer? Nothing. He’s a standard North-South runner, but that doesn’t mean he’s just Derrick Henry. His spin move at his size is reminiscent of Eddie Lacy with his ability to maintain his balance and forward momentum. He’ll likely be drafted at the end of the first round or the beginning of the second. Harris is going to be a starter for years to come. For fantasy, he’ll be the first or second running back off the board in your drafts, and you’ll likely be able to start him every week that he’s healthy.

🆕 Stumped who to draft in your C2C drafts? Here are some sophomore wideouts to target based on breakout age and market share who are set up for future NFL success.
https://www.dynastynerds.com/using-analytics-to-identify-sophomore-wr-breakout-candidates/