@TheSmingDynasty provides the story of Pooka Williams, Jr. in the next entry in our rookie profile series. Is the explosive player worth one of your rookie picks? 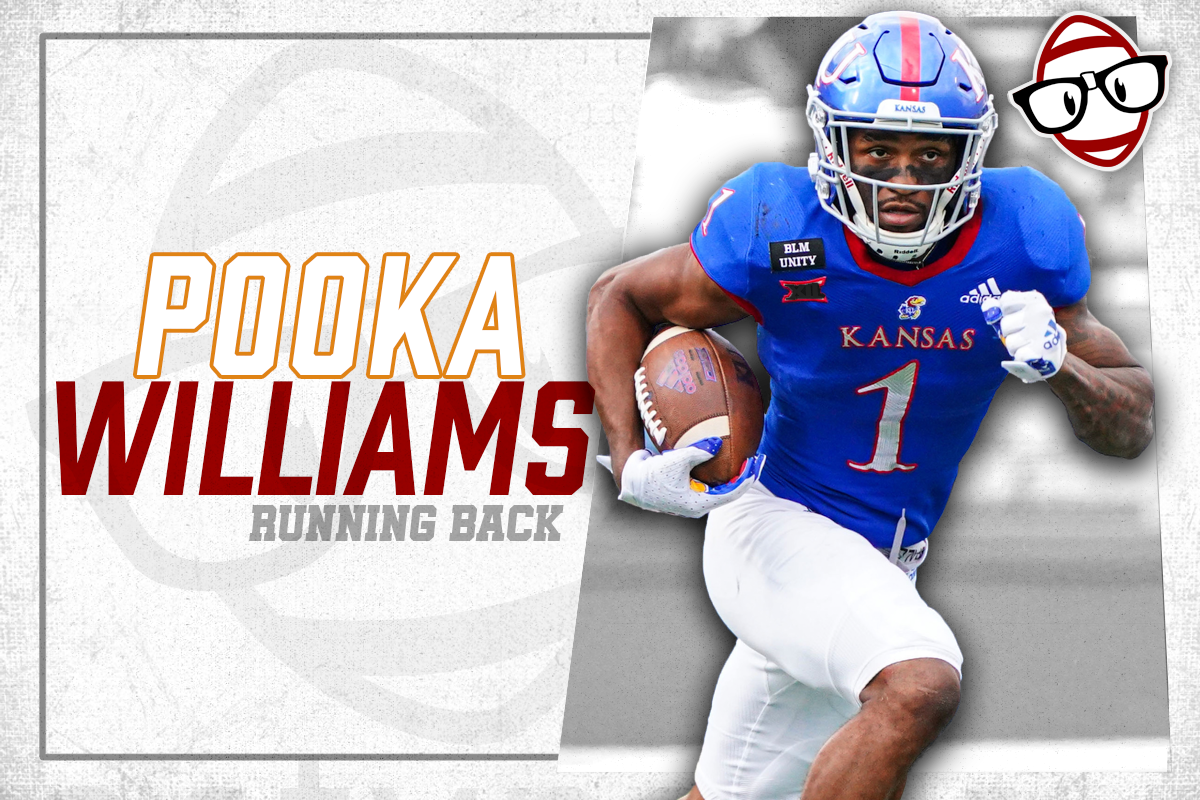 Anthony “Pooka” Williams, Jr. graduated high school in 2017 as a four-star recruit and the winner of the prestigious Mr. Louisiana Football award. He had offers to several schools, most notably the nearby LSU. However, Pooka zigged his home-state Tigers and zagged his way as a prized recruit for the Kansas Jayhawks.

Pooka attended Hahnville High School, home to other recent NFL alumni such as Alfred Blue and LaRon Landry. Williams carried his high school team to Louisiana’s Class 5A title game in his senior season. Although his team lost that game, Pooka finished that year with 3,118 yards rushing and 37 touchdowns.

In what most consider a top-heavy 2021 rookie class for running backs, will the diminutive but elusive Pooka, who happens to be missing all of the toes on his right foot, be a late-round gem for your dynasty teams?

If you’re on this website, then you almost certainly know that Kansas University is not exactly a historical powerhouse when it comes to the gridiron. They do, however, claim one very notable football alumni, Gale Sayers. Perhaps we should sit up and pay attention when the Kansas Athletics website has a video comparing Pooka to Sayers. I am obviously not making that comparison, but it is fun to note their feelings on the shooting star that was Pooka’s career at Kansas.

Pooka was named the Big 12 Freshman of the Year in 2018, the first Kansas player to win the award, and a member of the All-Big 12 First Team, amassing 1,125 yards and seven touchdowns on 161 carries. He also added 33 receptions for 289 receiving yards with two scores, opening the eyes of devy players to his future potential as a PPR back. Pooka rushed 15 times for 252 yards and two touchdowns in a nationally televised game at Oklahoma in the finest performance of his freshman season.

Feast your eyes on his highlights from that game to see just what Pooka can bring to the table.

Pooka’s sophomore season was equally electric, putting up 1,042 yards on 203 carries and adding 27 receptions for 214 yards. He scored three touchdowns on the ground and another two through the air. Pooka became the second Jayhawk to rush for at least 2,000 yards in their first two years at Kansas. The other? Gale Sayers.

As with many who suffered through 2020, Pooka’s final season this year was a disappointment. Hampered by injuries from the start, Pooka only played in four games this season, putting up a 51-196-2 mark. He did not look like his explosive self in his final two games this year against Oklahoma State and West Virginia, with lines of 14-32 and 11-21. Pooka announced on October 19th that he was going to opt-out of the rest of the 2020 season, stating that “Right now I need to be with my mother, who is battling health issues.” It wasn’t known at that time whether he would return to Kansas for his senior season, but on December 6th, 2020, Pooka declared for the 2021 NFL Draft.

To date, the Dynasty Nerds Film Room contains one game from Pooka’s college career, a 2019 game against Texas.

What might not be evident from the Film Room clip? This game was wild! Kansas nearly took down a ranked Texas team at home, losing in a shootout 50-48. It was crystal clear that Pooka more than belonged on the field with the Longhorns. He rushed for 190 yards and two touchdowns on 25 carries. He also caught the ball four times for 25 yards.

What can we see on the tape? He has great feet and is supremely quick. When he finds a gap, it is like he is shot out of a cannon. His frame allows him to make sharp moves and spins to get away from much bigger defenders. Pooka forces missed tackles like it is his job. He reportedly runs in the range of a 4.3 in the 40-yard dash, so let’s count speed and quickness as an obvious strength.

Pooka is also comfortable catching the ball. He has great hands, and this will translate well to today’s NFL offenses. A creative coach will find ways to get him into space and let him do the rest. One player you’ll see Pooka compared to at the NFL level is Tarik Cohen. Pooka is a potential match-up nightmare for NFL linebackers if he gets into the open field with the ability to run the ball and be split out wide or even play in the slot.

The Weaknesses and Red Flags

There are, unfortunately, more than a few potential red flags to note here. First, remember the opening? Yes, Pooka is missing all of the toes on his right foot due to a lawnmower accident when he was nine years old. Yes, I fully realize how crazy that sounds given what you see on film. Has it been an issue thus far in his career? It sure does not seem like it. Could it be a problem that causes degenerative issues and increased injury risks as he gets older and into the rigors of the NFL? Perhaps.

Another clear red flag is Pooka’s size. There is no getting around the fact that he is small at 5-10 and 170 pounds. Even the aforementioned Tarik Cohen is 181 pounds. Can Pooka’s frame hold up to the grind it will endure over the span of an entire NFL season? He could eventually turn into a player like James White, who stands 5’10” and 194 pounds, but he still has a few years in the weight room (or a few dozen large pizzas) to go to even get up to those minimum benchmarks. As you can see in the clip below, consistent pass protection is also not a strong suit, limiting any future role as a regular in an NFL backfield.

Finally, it’s possible that Pooka may not get an invitation to the NFL Combine due to an arrest for domestic violence, which happened at the end of his freshman season at Kansas. Pooka was charged with misdemeanor domestic battery after an 18-year-old woman alleged she was “punched in the stomach, as well as grabbed by the throat.” After being suspended indefinitely from the team, he later entered a twelve-month diversion agreement where he acknowledged that he “grabbed” and “pushed” the woman. The agreement required him to have no further contact with the victim, undergo a domestic violence offender assessment, complete an anger management course, and perform community service. The charge was dropped at the completion of the agreement. However, the memory and scrutiny of the NFL bear as a larger factor hanging over his head.

Given all of the above, I see Pooka as no higher than a day three NFL pick, and likely a late one, at that. His role in the NFL seems destined to be a change-of-pace PPR back, an occasional slot receiver, or even a kick returner, which he has also done in his time at Kansas. He has the speed, agility, and hands to succeed in each of those roles.

More importantly for us, though, does that matter for dynasty purposes? Could he contribute right away, if ever? The highlights say yes, but the numbers say no. A player of his size with what will be a likely late-round draft pedigree rarely becomes fantasy relevant. He falls into the sixth or seventh round in many early NFL mocks. Even if he does carve out a nice role given his skill set, my best guess is that he will be more useful for his NFL team than he will be for your dynasty lineup. Much like similar NFL players such as Jakeem Grant or Isaiah McKenzie, Pooka Williams may only be worth a late rookie pick in best-ball leagues or leagues which offer points for return yardage.

Film Nerds are back!! Subscribe to the Dynasty Nerds youtube channel and see the poscast, not just hear it. Player breakdowns, In My Defense IDP show, and much more coming to the channel.