Rashod Bateman is near the top of many wide receiver draft boards, but is he worth the lofty rankings? @tweetsbychad will help you answer this question. 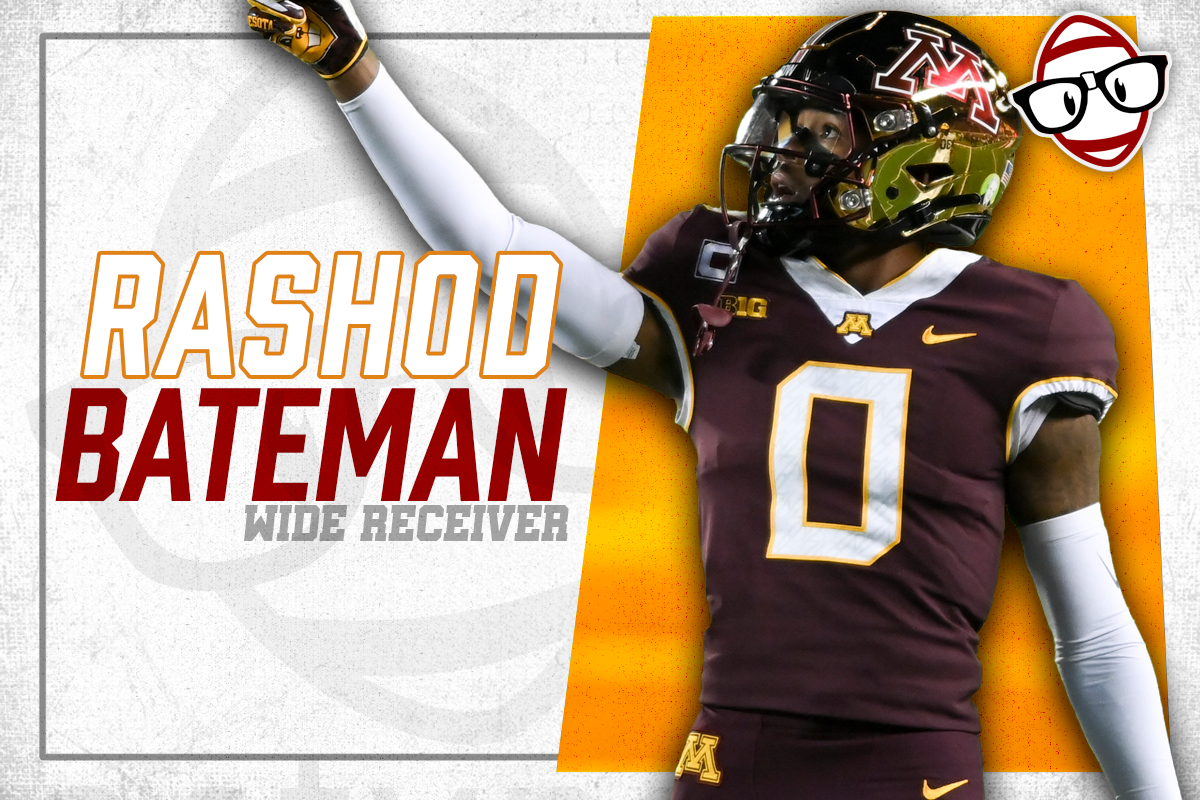 Rashod Bateman is near the top of many wide receiver draft boards, but is he worth the lofty rankings? @tweetsbychad will help you answer this question.

Hailing from Tifton, Georgia, the Tifton County High School product broke his school’s single-season receiving record by posting 1,539 yards and 21 touchdowns while earning All-State honors in his senior season. Bateman, a four-star recruit, was the 29th ranked wide receiver in his class.

Bateman started immediately at Minnesota, setting school records for a freshman in receptions with 51 and receiving yards with 704. Following his initial breakout season, Bateman really put his name on the map in his sophomore campaign when he posted 1,219 yards, good for 14th most in the country, to go with 11 touchdowns. This stat line led Bateman to be named the Big Ten receiver of the year. He was also a finalist for the Biletnikoff Award. Bateman initially opted out of his junior season due to COVID but opted back in when the Big Ten reinstated their season. He went on to play five games before opting out yet again, this time for good. Bateman wrapped up his junior season with 472 yards and two touchdowns.

Bateman posts a strong breakout age and has good size to go along with a 43.7% college dominator rating.

Beyond Bateman’s profile, he has several strengths that will serve him well at the next level. First and foremost, Bateman has exceptional hands. Not only is Bateman sure-handed in the open field, he often wins contested catches with his strength. The catch shown below highlights just how strong his hands and forearms are, as he hangs on to the ball with a defender pulling on his arms.

Bateman doesn’t resort to using his chest when he catches a pass but instead attacks the ball with his hands. While his strength on these types of plays stands out, he also flashes the ability to make the miraculous grab.

Due to his overall strength and fluidity, Bateman can beat press coverage. Minnesota utilized him in many fashions, including a lot of in-breaking routes, at which he excels. Make no mistake, Bateman can run a full route tree. He lined up both inside and outside for the Gophers and is an extremely clean route runner no matter where he lines up. He’s great at double moves, which he will need in the NFL as defenders are not as easy to beat on the first few steps.

Bateman has become known somewhat as a possession receiver due to his hands and ability to win contested catches, but he is solid after the catch. He’s not a superior athlete but often catches the ball while accelerating through the catch point. This allows him to pick up momentum, maximizing the speed that he does have.

While there aren’t many true weaknesses to Bateman’s game, he doesn’t pop off the screen when watching his tape. He’s not a burner and will never be the best athlete on the field, which may limit his yards after the catch ability in the NFL. He will likely run his 40-yard dash in the ballpark of 4.5.

As mentioned, he’s good at beating press coverage and accelerating through the catch, but he doesn’t have the initial burst or quick-twitch to blow by defenders. He’s more of a technician when it comes to route running, and he gains steam as he gets downfield rather than in short areas.

You can see how Bateman struggles to get where he wants to go in the short clip below. A little more burst and acceleration would help him do so.

Like last year’s class, the 2021 wide receiver class is loaded. The top two in this class are unanimous for the most part, but after that, it begins to vary with Bateman landing in that 3-7 range.

Bateman and Rondale Moore are often ranked very closely together, with the differentiator being that Bateman is very polished and NFL ready. He may not offer the same upside as some others in the class, including Moore, but he is very well rounded and polished, displaying many strengths that will immediately translate to the next level. Because of that, I expect him to step into a role immediately, depending on the landing spot. If you want to add a player that can make a difference for you in 2021, look no further than Rashod Bateman.

National Signing Day 2021 – Who Is Even Left?
2021 Rookie Profile: Najee Harris – Running Back