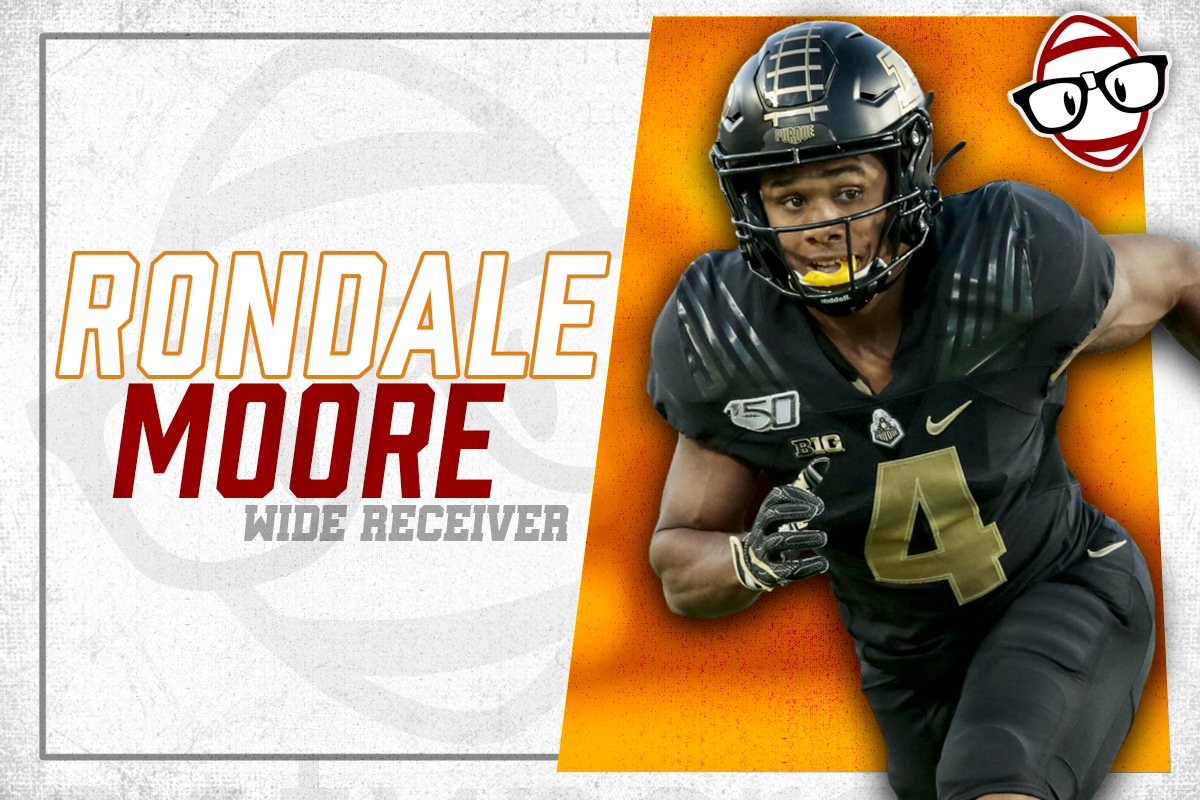 At 5’9 and 180 lbs from Purdue University, Rondale Moore is one of the most intriguing prospects in the 2021 NFL Draft. Once thought to be a generational, “can’t miss” talent, Moore now faces questions about his size and durability as he enters the NFL.  Who is Moore? What makes him so electric? What can you expect from him at the next level? Let’s dive in.

In high school, Moore was not just a stand out on the football field. Before transferring to Trinity High School, Moore attended New Albany High School. While there, he starred on the basketball team alongside now Boston Celtics guard Romeo Langford. Despite his basketball acumen, football was where Moore’s passion and future lay. In 2017 he led Trinity High School to the 2017 6A Kentucky High School State Championship. Along the way, Moore was named the 2017 Gatorade Kentucky Player of the Year. Moore finished his high school career as a four-star prospect, packed his bags, and headed for Purdue.

To say that Rondale Moore took the Big10 by storm would be putting things lightly. Moore set record after record on his way to becoming the first-ever Big10 Freshman to be named Consensus First Team All-American. A few of the marks that Moore set in his Freshman year:

After setting the world on fire in his Freshman year, the remaining two years of Moore’s collegiate career…underwhelmed. In 2019 and 2020 combined, Moore played just seven games. His 2019 season was derailed due to a nagging hamstring injury. However, all reports in the Spring of 2020 were that he was back in his Freshman form. Then, amid uncertainty surrounding the 2020 season, Moore decided to opt-out, only to later opt back in once the season was salvaged. After he decided to opt back in, Moore missed the team’s first three games with a “lower-body injury” before playing their final three games, amassing 302 yards and a touchdown on 41 touches.

However, injuries were not solely to blame for Moore’s lesser production in his final two years. Purdue was a combined 6-12 over those two seasons, and Moore was the focus of every defense’s attention.

As you can see here, Purdue was able to take advantage of that attention at times, but it absolutely contributed to Moore’s lesser per-game output over 2019 and 2020.

Two years have passed since the other-worldly start to his collegiate career. Questions are surrounding his size and durability. Still, I believe there are still many reasons you should be excited to potentially have him on your fantasy team.

So, why should you consider drafting Rondale Moore? What can you expect to see on the field? Three words come to mind as I watch Moore’s film: Athleticism, Power, and Patience.

Coming out of High School in the 2017 recruiting class, there were none more athletic at Wide Receiver than Rondale Moore. ESPN gave Moore a 133.62 SPARQ score, which was good for first in his class, and this makes sense given that he ranked first in two of the most important SPARQ tests. Moore ran a 4.33 40 yard dash and registered a 42.7 inch vertical, both the best in a class that included athletes like Jaylen Waddle and Ja’Marr Chase. What happens with this athleticism is engaged on the field? Defensive angles, advantages, and aspirations all just fade away.

Rondale Moore is no doubt an athlete capable of putting defenders in his rearview mirror, but what happens when the defenders stand between him and where he wants to go? Despite what his 5’9 180 lb frame might suggest, Moore is extremely powerful. By this point, his 600 lb squat as a freshman is the stuff of college football lore, and while squatting 600 lbs does not necessitate success on the field, it does confirm the power that I see on film.

Moore’s low center of gravity and incredible strength give him exceptional contact balance. Moore repeatedly steps through arm tackles, throws viscous stiff-arms, and bounces off of would-be tacklers. At the next level, tackles will undoubtedly be harder to avoid, but Moore is so good at this that I have no doubt he will be a YAC monster in the NFL.

Moore’s patience jumped off the film as I watched him continually weave his way through traffic. His vision and understanding of how to set up his teammates to clear a path for him, I believe, might be his best trait. Moore is fantastic around the line of scrimmage on jet sweeps and handoffs, but when he gets into that second level, it is something to behold. This patience and vision allow Moore to turn losses into gains and what should be 5-10 yard plays into 20-30 yard masterpieces.

Athleticism, power, and patience define Moore’s game, but who does he remind me of? With the ball in his hands, Deebo Samuel does come to mind. However, Moore is smaller, more explosive, and I actually believe his ceiling is much higher. My player comp for Rondale Moore is Steve Smith Sr.

Smith Sr. also was 5’9 and super explosive yet powerful, bulking up to 195 in the pros. With his weight room prowess, I believe Moore can do the same. Smith Sr’s ability to return punts, get deep behind the secondary, and turn short gains into explosive plays are all things that I expect Rondale Moore to bring to the NFL.

Moore is not yet the route runner that Smith Sr. was. However, given all his physical traits and drive to continually improve, Moore has the tools to get there. Former Purdue QB, David Blough, reported receiving calls from Moore at 1am. Moore would ask how he should be running routes on certain plays. I firmly believe that passion for improving will help him become a fantastic route runner throughout his NFL career.

One thing that Smith Sr. was well known for was his competitive nature. He wanted to stick people in the ground, embarrass them, and he would let them know about it. I see flashes of this in Moore’s game; An embarrassing stiff-arm, a celebration as he approaches the endzone, etc. If Moore can bring that “dog” mentality with him to the NFL, there is an argument that he could become the best player in this 2021 draft class. I believe Moore has just as high of a ceiling as any of the 2021 rookies, and he is someone that I am going to have on a lot of my dynasty teams.

Are you a member of the Nerd Herd? If you were you could hop in the Dynasty Prospect Film Room and check out some Rondale Moore film. Join the Nerd Herd for just $2.99/month. Also don’t forget to join more than 5000 of your closet friends and subscribe to the Dynasty Nerds YouTube channel.