Many analysts were excited for Sage Surrat after a strong sophomore season. Here’s why you should limit your expectations. 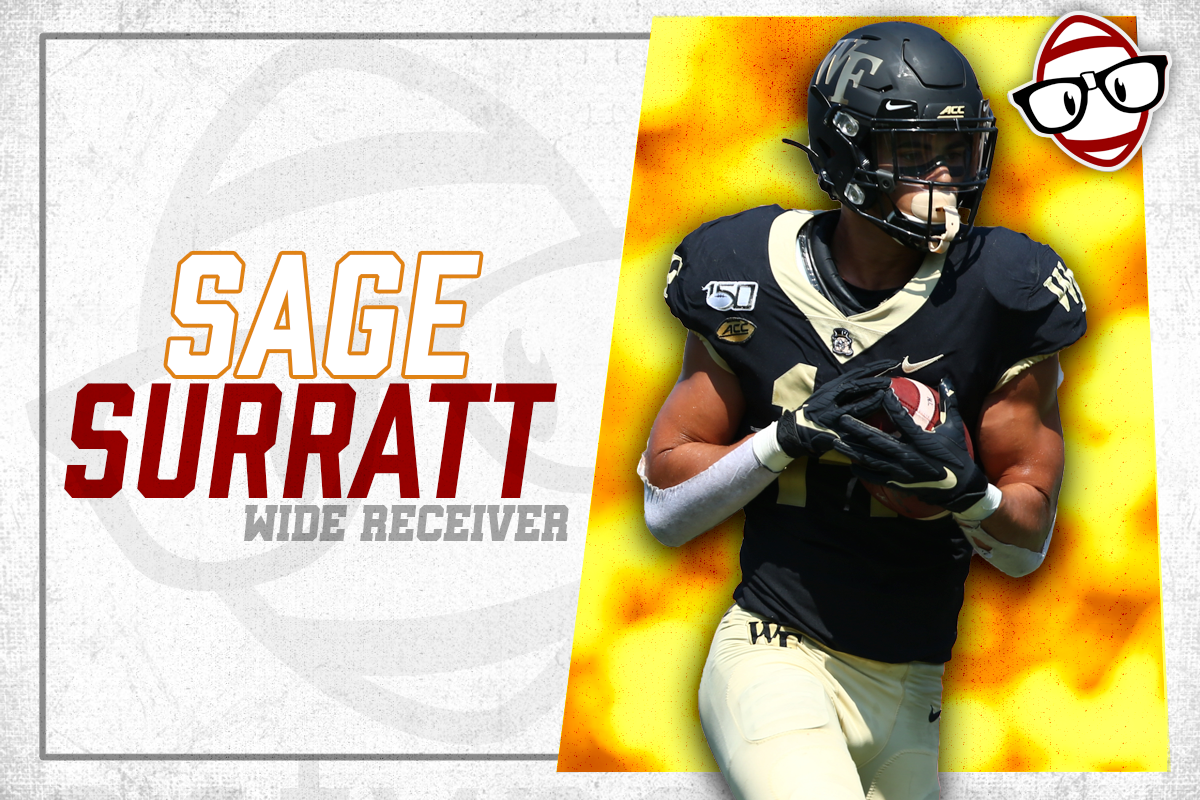 When I signed up to do WR Sage Surratt’s rookie profile, I was so excited. I have a share of him in my only devy league. He had looked to be a budding star in the little bit of film I watched previously.

Yet, when I did a more thorough review for this piece. I came away disappointed. Let’s dive a little deeper into Surratt.

Much like WR Dyami Brown, Surratt is a North Carolina man through and through. He was born there, raised there, and attended school there (high school and college). Surratt attended East Lincoln High School, where he set state records in receptions (366), receiving yards (5,926), and receiving TDs (30). During all four years of his illustrious HS career Surratt made All-Conference.

Despite shattering so many North Carolina HS records, Surratt was only a three-star recruit. Initially, he verbally committed to Harvard, then decommitted to attend Wake Forest. Surratt received a redshirt his first year. The following season, Surratt earned substantial playing time. With that playing time, he tallied 41 receptions, 581 receiving yards, and four receiving TDs.

Surratt entered his (RS) Sophmore season as somewhat of a breakout candidate. He lived up to the hype until a shoulder injury sidelined him and caused him to miss the final few games of the season. Still, Surratt racked up over 60 receptions and 1,000 receiving yards. He also finished with double-digit TDs.

Many scouts and fans were eagerly awaiting Surratt’s (RS) Junior season. However, he opted out of the 2020 college season to prepare for the 2021 NFL Draft due to COVID-19 concerns. It leaves us with a little less film to work on, and what we have is at least a year old. It’s still a good indication of who Surratt is as a player.

It’s challenging trying to find strengths in Surratt’s game. He is somewhat of an odd prospect. He doesn’t have any clear strengths outside of one, and the same nearly applies to his weaknesses.

Let’s look at what I see as his strengths:

The strongest part of Surratts’ game is contested catches. A QB just has to deliver a throw in his general direction, and he’ll haul it in nine times out of ten. It’s honestly a sight to behold and one of the reasons I was so in love with him as a prospect. There are no parameters on it, either. It’s true regardless of whether he is five or 50 yards downfield.

As you can see in the clip above, Surratt has the DB all over his back, yet, he’s still able to haul in the catch. The reason for that is about more than just his great hands. He engages the defender and wins the hand-fighting. Once he sees the ball heading in his direction he uses his body to shield the defender and uses his hands to secure the catch. It was a great effort and something seen regularly in Surratt’s film.

Surratt will be able to utilize this attribute at the next level. In critical situations like on third downs or the red zone, the ability to make contested catches is crucial. That allows for him to be on the field when it matters most.

To find another strength to Surratt’s game, you have to dig pretty deep. He utilizes his burst well for someone with limited or stiff movement ability (see the weaknesses below). When running any vertical route, you will see Surratt often hesitate or make a quick little move with his feet before exploding past the defender. Still, exploding for him is quite limited as he isn’t all that fast. Here’s an example below:

Surratt bursts off the line, then about ten yards downfield, he gears down. He patiently waits and lets the defender bite before bursting past him. It’s an excellent example of how he utilizes his burst effectively.

For someone like Surratt, who has limited speed, seeing him utilize his burst the way he does is promising. It shows his willingness. He wants to get open. At the NFL level, it won’t be as effective as coverage will be better and tighter. However, it will still create some openings that the right QB could exploit adequately.

As I mentioned earlier, there are two real weaknesses to Surratt’s game. They intertwine with each other and put up major red flags. It’s such a shame as he is solid in every other facet of the game at the WR position.

As I dug through Surratt’s film, it wasn’t something I could look past. All too often, defenders would be step-for-step with him, and he couldn’t shake them. It allowed defenders to get their hands on him and toy with him. He occasionally got the benefit of a pass interference call, but there were plenty of times that call didn’t come. That’s not something you can predict on translating to the next level.

Now, that play ended in a holding call. If we’re honest, the holding didn’t take place at the beginning of the route. Look at how easy and comfortable the DB is getting his hands on Surratt. He isn’t scared of Surratt’s movement ability as Sage telegraphs where he’s going and isn’t quick about it. He’s not worried about getting burnt by his speed. He is concerned about him making the contested catch.

Plays like this and countless others I saw on Surratt’s film have me worried about his prospects in the NFL fantasy-wise. WR’s who struggle to create separation and suffer from stiff movement abilities seldom improve on it at the next level. For someone with such a good all-around game this is a disappointment.

With Surratt’s stiff movement and inability to create separation, he’s damn-near untouchable for me. It’s a shame as I had high hopes for him. At his best, I see Surratt as a high-end possession receiver serving as a prominent option on the outside on crucial third-downs and in the red zone. A role in that vein won’t get it done for your fantasy teams. He fits the exact definition of a beneficial player for NFL teams, not your fantasy team.

You can expect to hear Surratt’s to be called in the third round of the NFL Draft. The best place for him to land would be on a team with a QB with no issues throwing into tight windows.

An ideal spot would be with the Tennessee Titans. He fits the mold and ideas of that offense. He has the big body, physicality to block downfield, and could play opposite WR A.J. Brown. It would be a thunder and lightning combo that could be effective with Ryan Tannehill at QB. Not to mention, with the amount of play-action they run, they could scheme him open. If that’s where Surratt lands, he’ll land back on my radar, but that’s a best-case scenario.

Where will Surrat go in rookie drafts?-

If the Titans are the landing spot for him, I could see him sneaking into the back half off the first round in many drafts. Either way, the depth of the WR position and that cost has me out on Surratt. The earliest I would take him is in the latter part of the second round, early third round.