Texas QB Sam Ehlinger will be one of the more difficult players to evaluate leading up to the 2021 NFL draft. @ReflipeWThenuz covers the player and his prospects at the next level. 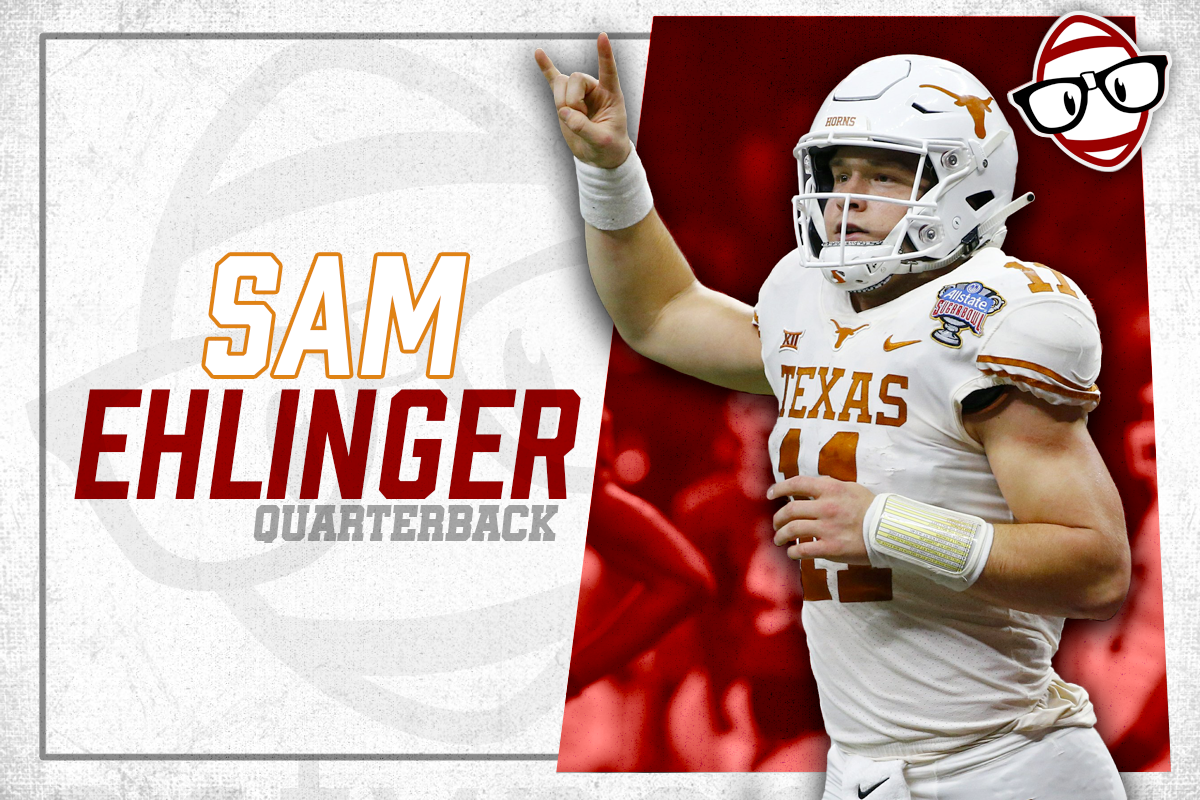 Heading into the 2021 NFL draft, few prospects are likely to be as polarizing as Texas QB Sam Ehlinger. The former 4-star recruit out of Westlake High School in Texas will be coming to the NFL on the heels of a successful college career. Ehlinger left school in the top three of nearly every major statistical category.

You would think that a QB who put up those types of numbers at a major school must be a sure-fire NFL prospect. However, when it comes to Sam, that is not quite the case. Some have compared him to former Florida great Tim Tebow due to his 6’3 230 lb frame. Others have said he is nothing more than a college QB who lacks the skills to play at the next level unless he changes positions. For my part, I am not willing to count out such a talented athlete. For this article, I would like to examine some of the aspects of Sam Ehlinger’s game to analyze for myself if he is or is not an NFL QB.

For those who know Sam, they know that breaking records is nothing new to Ehlinger. He came to UT after breaking high school records set by Drew Brees and Nick Foles. Yes, you read that correctly, two former Super Bowl MVPs attended Westlake High School ahead of Sam. By the time he was finished, Ehlinger owned both the passing yards and TD record. He was the MaxPreps High School Player of the year after his Junior season. You can see some of his high school highlights below.

You can see from his highlights that Sam brings a certain element of physicality to the QB position. He has adequate arm strength and a knack for the big play. There are some questions about his delivery and mechanics, but we will address that a little later. Following an extremely successful High School career, Sam decided to attend his boyhood dream school and enrolled at the University of Texas.

One of the big obstacles for Sam moving to the NFL will be learning NFL schemes. Tom Herman’s system is truly a college system. It makes heavy use of shotgun formations and highlights the read-option. These elements limit the reads for Ehlinger, allowing him to make a couple of quick reads or take off and run the ball, which he does very well. Despite the lack of an NFL system, he will bring excellent intangibles to the table. He is a bonafide leader who excels in pressure situations.

During his career as a starter, Sam has completed 63% of his passes for 94 TD’s to go along with 33 rushing TD’s against only 27 ints. You can see his college stats below.

When you watch Sam Ehlinger play ball, it is easy to see why some think so highly of the young man. He has adequate arm strength, excellent football IQ, command of the huddle, and takes care of the ball. Sometimes his accuracy is lacking a bit. However, one thing is clear, when it comes to the big games, Ehlinger does not flinch in the face of adversity. Against the eventual National Champion 2019 LSU Tigers, he stood toe to toe with Heisman trophy and no.1 overall draft pick Joe Burrow. In the game, Sam was a one-man wrecking crew going 31/47-401-4. He supplemented his impressive passing numbers with a 19/60/1 rushing line. You can see an example of his arm talent below.

One area of Ehlinger’s game that sets him apart from other Quarterbacks is his mobility. He can put his shoulder down and run with power and speed, being able to avoid pressure and get to the corner of the defense. With rushing QBs being all the craze now in the NFL, it is possible that Ehlinger could be drafted as a package player. You can see below examples of just how talented of a ball carrier he is.

Ehlinger has also displayed some decent touch throughout his college career. In order to succeed at the next level, he will not simply be able to rifle the ball. In the clip below, you can see him drop the ball in softly in the hole behind the linebacker.

Despite all of his accolades, Sam Ehlinger has some issues heading into the professional ranks. First and foremost, he is not the most accurate passer. Sometimes he tends to sail the ball. Despite this weakness, he was not overly turnover-prone, leaving Texas with a 94/27 TD to INT ratio.

While Ehlinger is unquestionably an athletic QB, the exact type of player he is sometimes causes him problems. The kid plays with a tremendous amount of heart, but that has caused him to take some unnecessary hits throughout his time at Austin. As a result, he has missed some game action leaving his team to rely on backups.

Another glaring issue alluded to earlier in the college scheme he leaves. Ehlinger has spent very little time under center during his college career. That may be fine in the Big12, but it is not going to pass muster in the NFL. Sam will have to adjust to life under center if he wants to have a job at the next level. He will need to be paired with a coach or mentor who can help him learn to read and break down NFL defenses. If he can find such a setup, he could be a special type of player.

After watching the tape on Sam Ehlinger, it is clear that he has the talent to play at the next level. In all likelihood, he will not be a day one starter wherever he is drafted. He will have to take some time to adjust to the NFL game. Only time will tell if he can develop and elevate his game like Dak Prescott or if he has maxed out his abilities and is what he is, much like Jake Locker or Time Tebow. I, for one, will be watching where he ends up in my Superflex drafts. He could be a nice mid to late-round stash player to squirrel away in case he becomes an asset.

Thank you for reading this article! Please be sure to join the #Nerdherd, so you don’t miss out on any of the amazing things we have to offer Dynasty Nerds. You will get rankings, extra podcasts, and access to our rookie film room. For just a couple of bucks more, you can get access to our revolutionary DynastyGM tool. So much for so little, why miss out on all the fun. Follow me @ReflipeWThenuz for more dynasty content and other musings.