Can Seth Williams be the next mid-round rookie breakout? 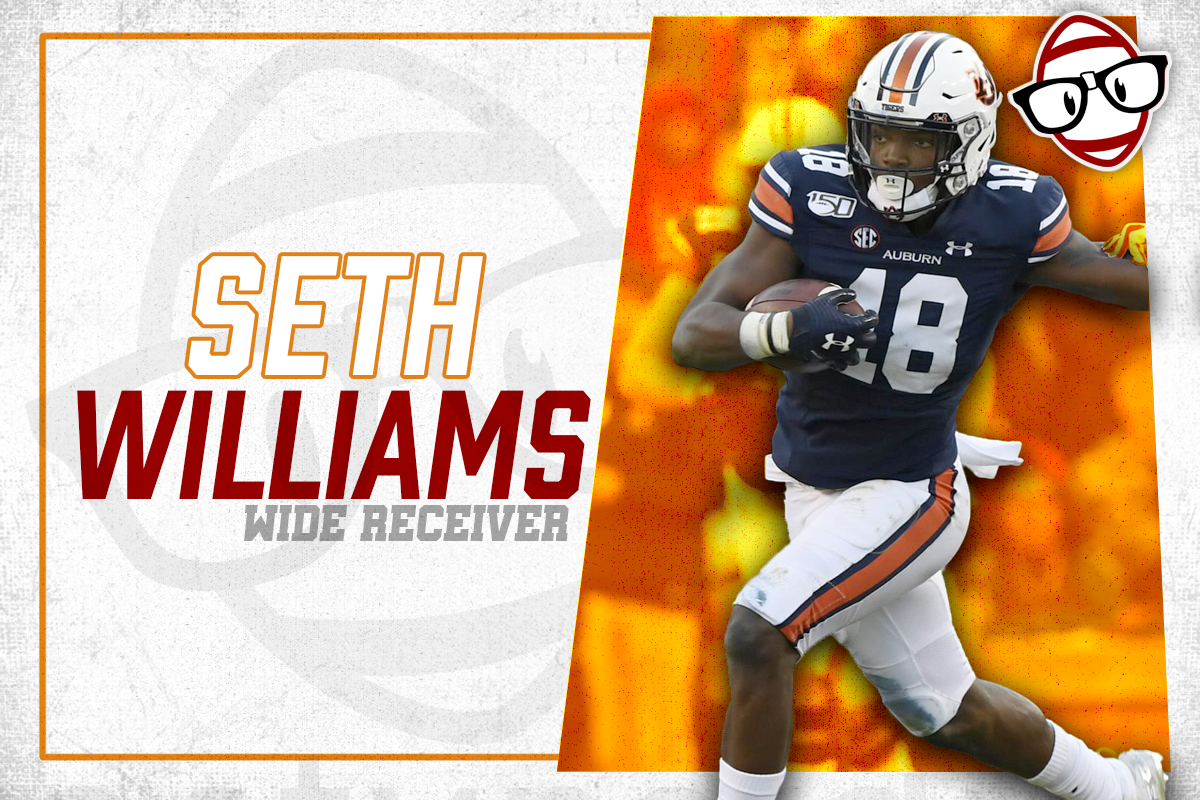 Seth Williams is a divisive name in the ’21 receiver class. Some have him as a top-tier talent, a potential alpha; others see him as a big slow guy in the mold of N’Keal Harry.

Is he worth a shot in your rookie drafts this spring?

Seth Williams hails from the Paul W. Bryant HS in Cottondale, AL. The #35 WR in the 2018 class, he was recruited by all the SEC programs before landing at Auburn. At 6’3″, 215 lbs, he certainly has the size to become a true #1 at the next level.

Williams’ raw counting stats in the run-heavy Tigers program don’t impress. He never exceeded 830 yards, 59 receptions, or eight touchdowns in a season, despite seizing the lead role as a sophomore (he played behind Darius Slayton as a freshman, though he still saw plenty of work).

Yet when we look at Williams though a market share lens he shines.

If you want help better understanding these numbers, DM me on twitter and I’ll happily explain.

For some context, here’s the top-3 Av. DOM in the Power-Five, and a couple of your favorite WRs for comparison:

So, yeah. He does well analytically. He passes the BMI test, too, if you’re into such things, hitting a 26.9 mark. His SO DOM makes him a 2nd-year breakout, another great asset in his profile.

Well, let’s take a look at the good side of Williams:

Downfield play, tracks the ball, has a step on the CB, elevates over the safety, makes the contested catch… It doesn’t get much better than this. Williams is big and athletic, and he will go up and win the ball.

While he wins on the 50/50, don’t mistake Williams for just a jump ball guy. He doesn’t have every tool, but he knows what his strengths are and uses them well.

Here he blows by the coverage at the line, goes back over the DB to snag the back-shoulder ball, and runs by everyone on his way to the end zone.

Williams is big and fast, and he knows what to do with it.

While his route tree is limited, there are a few other things he does well, like here:

He’s no route ninja, but his start/stop isn’t bad for a bigger receiver. Also, his technique decelerating isn’t right (weight on heels is bad), and that’s a good thing, as it means he can improve with good coaching.

Like a lot of other fast receivers, he is effective on slants and crossing routes due to the earned cushion:

Williams is not a massive RAC guy- he can’t break tackles like AJB or make people miss with shiftiness- but he does have speed when he catches the ball in stride and apparently loves hurdling dudes. I guess he was watching Josh Allen tape last summer.

There are ways to win routes without deadly quickness, and Williams can do it:

He’s physical at the top of the route and stacks the DB to give himself leverage to be a nice target for Nix. It’s a nice job fighting for yardage here as well- for all that, he’s no a huge tackle breaker, but the effort is there.

I had my choice of a dozen solid blocking reps to show you. He’s not the strongest blocker, but he’s willing and effortful. With a little bit better technique, he could become a great weapon in the run game as well.

As I’ve alluded, Williams has tools, but he’s far from a complete receiver. His route tree is fairly simple- you essentially just watched all the different route types I found in three games of film.

We’ll look at this clip again for convenience:

Williams is just short of the first down marker- and then he doubles back to try to break the big play, instead of just falling forward or lowering his shoulder. This wasn’t an isolated instance. I found a few plays where he seemed to lose his focus on the situation.

Nix probably shouldn’t have thrown this ball- it was likely to be a negative play anyway- but Williams straight up drops it with the contact.

He’s good at plucking the high passes out of the air, but when the ball is off target, his radius isn’t great, as in this comeback rep:

It’s a poorly placed ball, but still, he needs to make the play. There are many reps like this. In fact, there are whole games in which he seems off and misses plays he’s made many other times.

He goes up and makes an awesome, athletic play but loses the TD when he hits the ground. I’ve never played receiver (other than schoolyard ball), but I’m told that’s a technique thing and that he should have secured the ball differently.

Auburn tried to get the ball in his hands in different ways, but his versatility is limited. Here’s the best screen rep I found (of maybe four I watched):

That’s… not great. He’s decent in space once he gets a few steps, but he doesn’t have the quickness or burst to evade defenders at the line of scrimmage. That’s not likely to be part of his game at the next level.

I’m very interested to see how Williams runs at his pro day (likely no combine this year.) I think if he can put up a time in the 4.4s, his draft stock will soar. Even at 4.5-4.6, which would be my best guess right now, he’s going to find a role. He’s not just a jump ball guy; he’s a size/speed athlete that can win using physicality and ball skills.

It’s exciting that he’s not near his ceiling. There are similarities to a guy like Kenny Golladay or Courtland Sutton, who came into the league raw but toolsy and took a year to develop before really making an impact.

He has the skills to get off press and play X in the NFL, but I could also see him in a big flanker role, as we see guys like Breshad Perriman play at times, stretching the field and working on deep posts or shallow crossers.

A big thing for Williams will be consistency; as I pointed out earlier, he has games where he’s on fire and others where he can do no right. That seems to be more of a mental thing, but a good coaching staff can likely help there and help him clean up his technique.

In terms of fantasy, Seth Williams is probably the type of guy you should be taking a shot on in that second/third tier of receivers. Unless he gets way better draft capital than I expect, he’s not going to cost a first-rounder or even a high second; I see him floating in the mid-to-late second round in most drafts. Of players in that range, few are going to have Williams upside.

What is his ceiling? Big, fast, strong, can win contested catches- that sounds like a guy that can sniff WR1 if he really hits his potential. His floor would likely be more of a Mike Williams type career; flashing for moments but lacking the consistency of a real difference maker.

Oh, and go watch more film yourself. Here’s some links to the film room- check it out!

2021 1QB Mock Draft 3.0
Arthur Smith Rises Up To The Challenge In Atlanta