Are you in a league that uses cornerbacks? @ejh1528IDP gives you the rundown on Shemar Jean-Charles, one of the nation’s top cornerbacks. 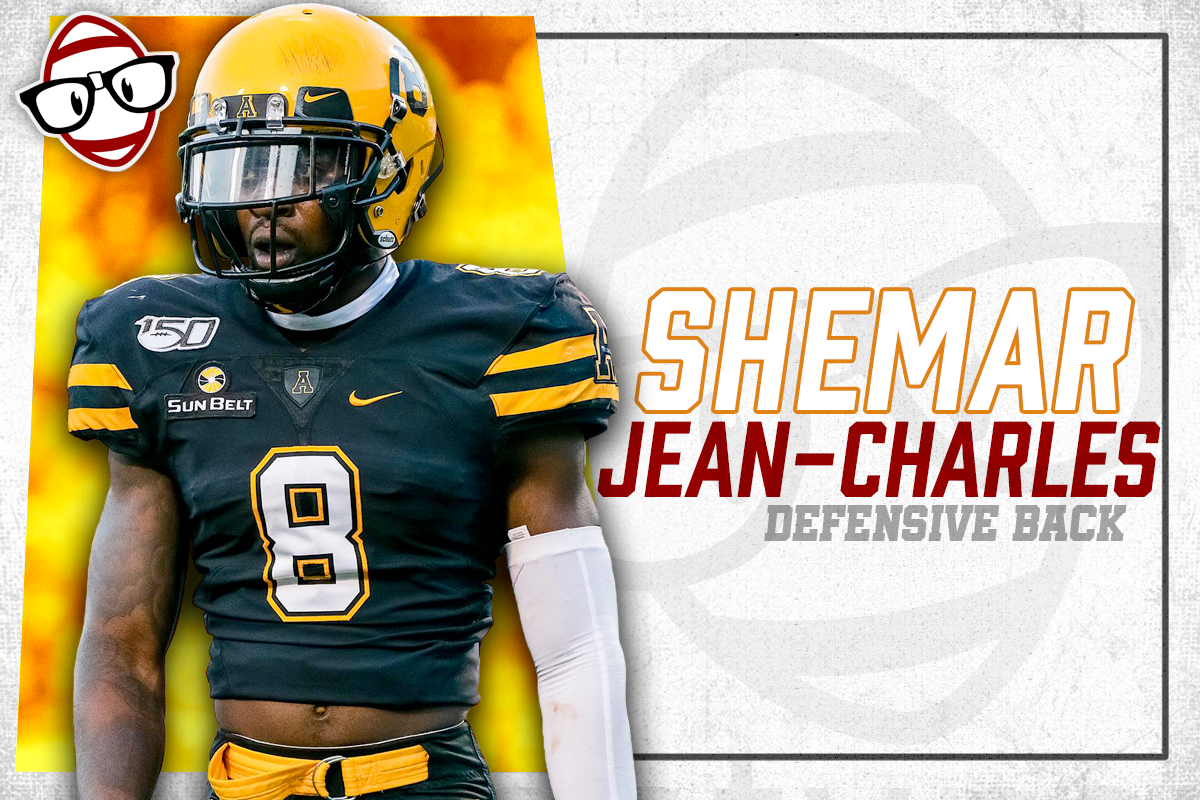 High School: He was a two-star recruit coming out of Miramar High School in Miramar, FL. During signing week, Shemar Jean-Charles only had two offers with a scholarship, one of which was Appalachian St. He was selected to the second-team All-Broward County team as a senior by the Miami Herald.

College: After choosing Appalachian St, Jean-Charles redshirted his freshman year. Going into his redshirt freshman season, Jean-Charles was tagged as the third-string cornerback. He eventually played in all 13 games for the Mountaineers, amassing a modest ten tackles to go along with two pass deflections.

As a redshirt sophomore, it was much of the same as the previous year. Jean-Charles played again at the third cornerback and dabbled on special teams. He finished the season with five tackles and doubled his pass deflections from the 2017 season, with four.

As Jean-Charles entered his r-junior season, he was tabbed as the starting cornerback and didn’t disappoint. He played in all 14 games, starting 13 of them. Jean-Charles finished the season with nine pass deflections, 45 tackles and his first career interception. According to PFF, Jean-Charles allowed a catch on only 55% of the passes thrown his way and allowed four touchdowns. To top off the season, Jean-Charles was selected to the third-team All-Sun Belt.

His r-senior season put his name on the map. Jean-Charles led the nation, that’s right, the nation, with 17 pass deflections and allowed a catch on only 33% of the passes thrown his way. He allowed only two touchdowns on a total of 198 receiving yards to opposing receivers and added in 37 tackles. He was a semi-finalist for the Bednarik Award and the Thorpe Award. Jean-Charles added to his resume by being selected to multiple first, second and third-team All-American squads.

Jean-Charles has great field vision and has a knack for the ball, as shown by his pass deflections over the past two years.

Below Jean-Charles shows great field vision and watches the quarterback and comes up with the pass deflection.

I really like App State CB Shemar Jean_Charles on film. Lengthy, confident, aggressive corner. 16 pass breakups this past year and PFF also charted him as having a higher forced incompletion rate (34.6%) than catch rate allowed (32.7%) on the year. Underrated player in this class pic.twitter.com/VqVi7FCeMd

Here is Jean-Charles with another pass breakup. He comes in at the right time while preventing a penalty.

He has solid ball skills but won’t come down with a ton of interceptions. A big key to his game is his versatility. Jean-Charles could see time at safety, outside or slot corner, which gives his game a boost. He has excellent foot speed when having to backpedal, preventing himself from getting tangled up or losing ground on the wide receivers. Jean-Charles has fluid hips and moves with ease when changing direction quickly.

Even with a slight height disadvantage, Jean-Charles climbs the ladder and gets a pass deflection.

The level of competition will be one of his most significant flaws. Jean-Charles held his own and made some plays on the ball. His first step off the line can be slow at times. However, his closing speed and ability to catch up will make up for it at times. Jean-Charles is on the smaller side and could afford to pack on the muscle and get more physical with the opposition.

Shemar Jean-Charles probably won’t be selected in your rookie drafts unless it is a deep draft. If your league uses pass deflections, he could end up being a steal as a late-round pick or as an undrafted free agent. Jean-Charles can play safety at the next level, which would boost his draft stock and where he goes in rookie drafts.

Thanks for reading and I hope you enjoyed the article. You can find me on Twitter @ejh1528IDP. Feel free to shoot me any IDP (NFL or Devy) questions you may have. You can check out my NFL Draft Content here and my previous Dynasty Nerds articles here. Are you a #NerdHerd member yet? For just $2.99/month, you get access to rankings, extra podcasts, the buy/sell tool, and more on the way