@EKBaller takes a look at another gem in this deep ’21 class. 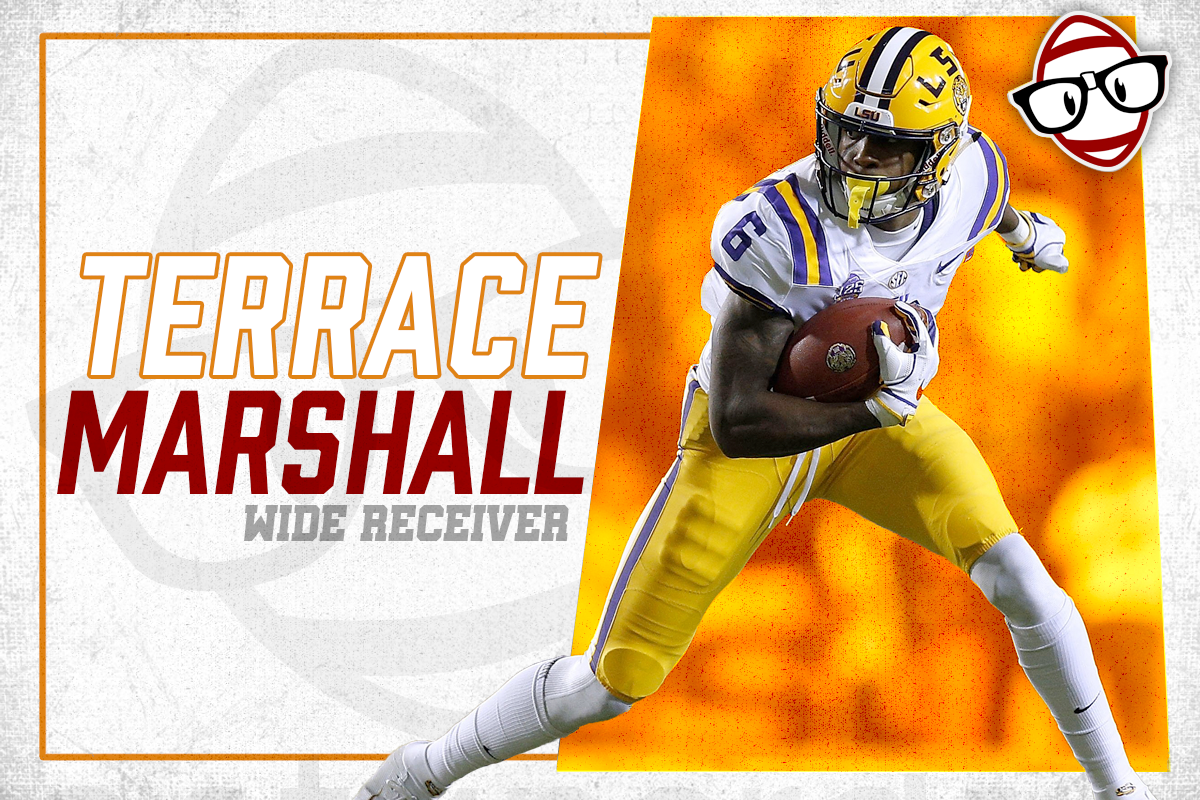 In 2019, on LSU’s record-breaking, championship team, Terrace Marshall lived in the shadows of teammates Justin Jefferson and Ja’marr Chase.

2020 saw a full-on breakout for Marshall, and, oh, it was glorious.

In the glut of talent that is the 2021 WR class, you’re going to get Marshall later than you should. Here’s why you should be targeting him.

As a freshman, Marshall found his way onto the field despite a crowded pass catching core led by then-sophomore Justin Jefferson.

While Marshall’s sophomore year doesn’t count for an analytical “breakout,” any common-sense assessment is going to look at his 45/671/13 receiving line- in just 12 games- as an achievement.

Due to his lack of early production, Marshall won’t pop in a lot of analytical models, but there’s more to the player than is picked up on a spreadsheet.

Marshall isn’t a perfect prospect, but he does a lot of different things well.

I’ve watched quite a bit of Marshall film, and I’ve seen more spectacular catches than drops. Like this one:

He plucks that one out of the air at nearly full extension. Impressive.

Holding? Terrace doesn’t care. He’ll grab it with one hand. The focus and ball tracking there are excellent.

I love his ability to focus and track the ball well even when in close or double coverage.

Here’s another, maybe the most impressive of this type of play I’ve caught:

The focus and body control to be able to go up and over and attack the ball while running at full speed is not something you’ll see in many receivers. He gets some good separation on this post as well. You’ll see that a lot on his routes; he’s no technician, but he wins with burst and physicality.

Marshall isn’t just a deep ball guy. He does a lot of work in the short area of the field as well; he’s very effective on slants and does work after the catch.

Marshall consistently attacks the ball, and that contributes to his success in contested situations; he’s also great at using his body and gaining leverage against DBs, stacking them to create space to make plays.

And sometimes he does this:

I know there are knocks on him, but Marshall wins in double coverage- a lot. Stacking DBs, highpointing, attacking the ball in the air. He’s tough to stop.

He’s not a tackle breaking machine, typically, but he has some elusiveness in his toolkit.

He’d rather just run away from DBs:

Marshall does an excellent job finding the soft spot in zones, and, while he’s not a true burner, he has good acceleration and a smooth transition to running, and he often gets a step on the secondary and is gone.

The big knock for me is that we don’t see a ton of razor-sharp routes from Marshall. There are a few routes I could show you where he creates separation with quickness and route-running, but they are far between. There are many routes where he rounds into his break and gives up separation; he doesn’t change direction well at high speed.

I have some concern that in the NFL he won’t be big enough and fast enough to win the way he wants to win. Still, he has great size and high-level ball skills. If he tests well or has put on a few pounds by the combine I’ll be a lot more confident in his future.

As I alluded earlier, there are knocks on Marshall from an analytical perspective. He doesn’t show much production until his junior year, which shrinks his cohort of successful comps a little. Another issue- pending his weigh-ins- is his BMI. His currently listed 6’3″, 200 lbs leaves Marshall with a BMI of 25, a full point lower than the ideal threshold

Look, Marshall isn’t a lock to be a WR1, although, really, none of these guys are at this point (though a few are close).

He’s not as strong an analytical profile as Chase or Bateman; his film isn’t as “wow!” as Smith or Rondale Moore; he’s not a size / speed freak like Tamorrion Terry.

Still, Marshall is a damn good receiver with a diverse skill set, good speed, a nice catch radius, and undeniable ball skills. He does have the height and the speed to beat DBs down the boundary or to win 50/50 balls. He has the potential to become a true alpha X receiver; I see shades of Michael Thomas in his highlights.

Or, on the other hand, he could be James Washington, if he tests more poorly than I think- a capable but not-athletic-enough deep threat and slant runner.

His most likely outcome lies somewhere in the middle of that spectrum. He did run a 4.53 in high school, so it’s not unlikely he can push into the 4.4s now. If he runs well and weighs in just a bit heavier, I’ll be pumped.

In SF rookie drafts, you’re going to be getting Marshall in the middle of the 2nd round. It’s a testament to the talent of the ’21 class that we’re looking at a playmaker with real upside in that 15-20 range.