@Glosser13 sets aside his dislike of Notre Dame to break down high upside TE Tommy Tremble. 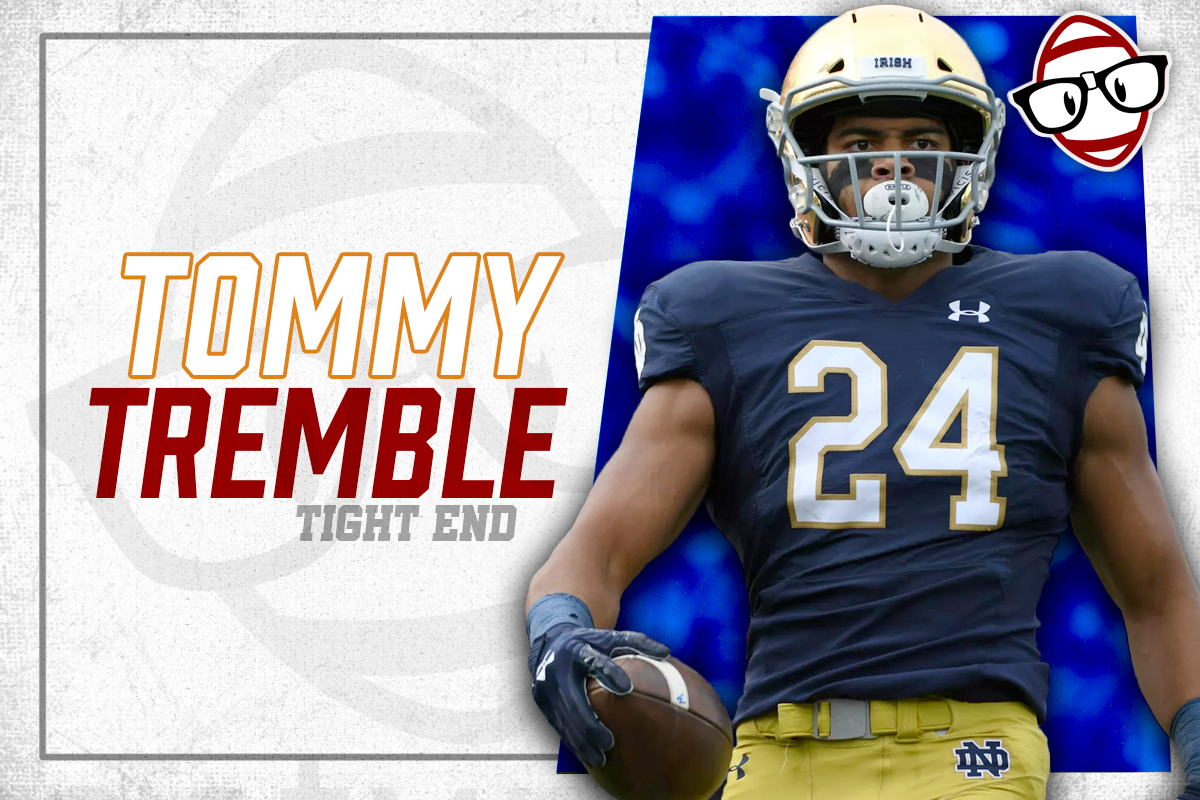 Tommy Tremble is a native of Atlanta, Georgia; he played his high school football at both Johns Creek High School for three seasons before attending Wesleyan School for his final season. He was a two-way player in High school, and he played mostly defense.

His dad Greg Tremble started 22 games for the Georgia Bulldogs from 1992 to 1993, recording six interceptions and one touchdown. Tommy credits his father for his physical play and how aggressive he is in the run blocking game.

247Sports ranked him as a three-star recruit with a composite score of 0.8797. Tremble was the 490th ranked player nationally and the number 21 tight end overall according to 247Sports. After transferring to Wesleyan as a senior, Tremble would only appear in two games before a broken ankle would end his season.

The rehab from Tremble’s ankle injury cost him a chance to play as a true freshman at Notre Dame. As reported by notredame.rivals.com, Tremble was closer to 210 lbs than 230 lbs when he was recruited. The idea of Tremble being brought in to be the next great Notre Dame receiving TE didn’t come to fruition. There are very few dynasty managers who will look at his 35/401/4 college stat line and come away impressed.

Tremble made his name as a run blocker for the Irish, most notably earning the number one blocking grade amongst all FBS tight ends according to Pro Football Focus. The versatility Tremble brings and the attitude of not needing the ball to impact the game are excellent qualities. NFL teams will love this about him in the draft process. He possesses a natural talent that easily can translate to the NFL level despite serving as mostly a backup TE at Notre Dame.

Tommy Tremble started 2020 as a key piece of the Notre Dame passing attack. In his first two games, he hauled in eight receptions for 104 yards. Over his next eight games, he would catch a total of 11 passes for 114 yards. He would also fail to catch more than 1 pass in six of those eight games. His ability to play H-back and inline TE and affect the game as a blocker was a big reason Notre Dame ended up in the College Football Playoff in 2020.

This won’t sell many dynasty managers who are looking for instant production from Tremble. The Notre Dame TE is a monster in the run game. He sets the tone with his blocking, which will be a key factor in him seeing more snaps as a rookie. He may have never been the number one guy in college, but if you look at some of the games’ best TEs, they can get it done blocking in the run game. Tommy Tremble will bring a physical playing style that will instantly help improve any offensive line.

Tommy Tremble is the block the RB is reading on 4th and 1. As the RB attacks the LOS, he can easily get outside, find the hole and take it to the house. Tremble squares his man up and pushes his man five yards downfield.

Tremble wasn’t relied on heavily in this area, with only 19 receptions on the season. He certainly has the speed to stretch a defense with his reported 4.63 speed. This wasn’t asked of him routinely in the Notre Dame offense. Tremble averaged 11.5 yards per catch on 35 career receptions. He was a chain mover when he needed to be. Tremble can make those tightly contested catches that top-level NFL tight ends make routinely.

This play is a simple play action fake with Tremble running a wheel route. The throw isn’t great, nor is the route, but Tremble can adjust to make the catch through contact. He does a great job maintaining possession throughout the entire process of the catch. This is NFL-level stuff n this play.

A trait every NFL player needs to some degree, it’s crucial in a TE as versatile as Tommy Tremble. He doesn’t shy away from contact regardless if he’s lining up as a fullback or running a route from the slot. Tremble can use his raw athletic ability and punishing playing style for making defenders pay for lining up across from him or trying to cover him.

This is a simple but effective play from QB and TE on 3rd and long. Tremble sits down in the zone a yard shy of the first down with three defenders around. He’s able to secure the catch and use his field awareness and power to turn upfield and break a tackle to get the first down. This is a play that may not be “highlight” material, but it’s exactly what you need from an NFL TE.

It came as a surprise to some that Tremble would declare for the 2021 NFL Draft. All of Tremble’s receiving touchdowns at Notre Dame (4) came in the 2019 season. He did increase both his catches and yards in 2020. However, his numbers aren’t exciting as a dynasty manager looking for stats to justify using a late rookie pick on him.

Tremble has played the backup TE role to Cole Kmet and now Michael Mayer in South Bend, Indiana. It’s fair to assume Tremble was certain his time as the number one guy to showcase his receiving ability would never come. He decided to take his chances in the NFL draft. We have seen tight ends like Dawson Knox and Dalton Schultz, who have been mediocre college production players, make their way into starting NFL roles. In small doses, they have given managers reliable fantasy production early in their careers.

Tommy Tremble’s biggest disadvantage is the star power in this 2021 TE class headlined by Florida’s Kyle Pitts. It’s likely to Tremble will be a mid-round pick – possibly anywhere from the middle of the 3rd round to the fifth round. The NFL Combine being canceled surely won’t help Tremble, who would likely have put on a show from an athletic standpoint for NFL scouts. Instead, they will rely solely on his game tape and pro day.

Tremble has shown enough to be worth a middle-round pick in the 2021 NFL Draft and can be a high upside player if he lands in the right offense. This will be a case where dynasty managers must give the player a few years to develop on a taxi squad or deep roster. If this isn’t something you can do, it’s likely not even worth drafting him. He has a chance to surprise, but it might take a perfect landing spot or injury for us to see fantasy production in the 2021 season.

As always, thank you for reading. You can find me on Twitter @Glosser13. Make sure you are checking out all the prospect tape in the Dynasty Nerds film room and use all the tools we have to help you gain a huge advantage in the off-season. Dynasty fantasy football never stops; it’s just as important in February as it is in September. Never stop grinding Nerds.