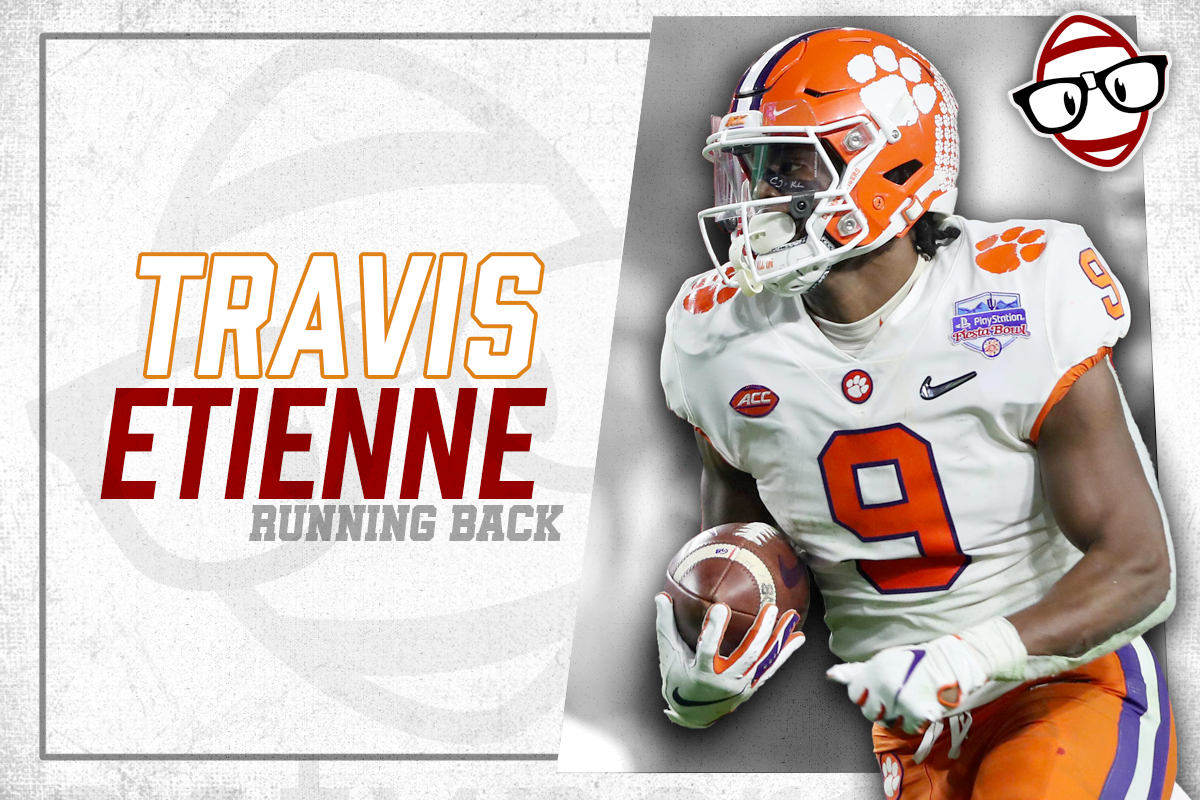 Unlike the other consensus top running back in this class, Alabama’s Najee Harris, Travis Etienne was not highly recruited out of high school. He had 26 offers, but he was just a 3-star prospect from Jennings, Louisiana, with fewer than 10,000 people. They were the 60th-biggest city, and he was the 16th overall recruit from the state and second at his position behind a fellow Tiger in LSU’s Clyde Edwards-Helaire, now of the Kansas City Chiefs.

Etienne was explosive, as evidenced by his strong track-and-field skills, and that has shown at Clemson. However, there were concerns that he may not be able to be a three-down bellcow style back. Once he got on campus, though, he quickly showed that his explosiveness could be translated to the college level and happen every play. For his career, he averaged over 7.0 yards per carry, including one season with over 200 carries and 8.1 yards per tote.

Etienne has consistently worked to improve his game since arriving at Clemson. After catching 17 balls combined in his first two seasons, he caught a total of 85 in his final two years. Outside of a couple of small injuries, he stayed largely healthy, and he played in all but one game during his four seasons. The lone missed game was in Week 2 of his Freshman season against Auburn. Whatever team drafts him is about to get an explosive player that shows up on game days.

Etienne wasn’t the lone runner on campus during his first year to have a hefty workload. He was tied with Sophomore Tavien Feaster with 107 carries, but he averaged nearly a full yard per carry more at 7.2 vs. 6.3 yards per carry. After that Freshman season, it became clear pretty quickly that Etienne was a special player. You just had to give him the opportunity to be successful.

In the next two seasons, Etienne took his opportunity and ran with it. He totaled 3,272 yards and 43 touchdowns on the ground while adding 510 yards and six touchdowns through the air. It was a surprise to a lot of draft analysts when he elected to come back for his final season despite having a Round 2 draft grade from the advisory board. When you total over 3K yards in two seasons, it’s going to surprise most people.

That final year is unlikely to move him from that Round 2 draft grade. Especially with breakouts from other running back prospects and a talented free agency pool to choose from. That being said, Etienne put up the numbers to expect him to be chosen in the second round of the draft or the third at the latest.

Etienne is often looked at as just a speed back, but he’s not just that. When he gets a full head of steam going, he can drag would-be tacklers for several yards. On this particular play, he gets contracted a couple of yards past the line of scrimmage. He then proceeds to drag a linebacker several yards along with him. He’s not going to be dragging guys like Derrick Henry, but he isn’t going to get knocked down with an arm tackle.

On this one, this just shows off some of that burst that Etienne is known for. He takes the crease to the outside. When he’s one-on-one with the defender, it just takes a slight hesitation before he’s able to blow right past him. His nifty footwork keeps him inbounds along the sideline, and he’s off to the races. If a team is looking for a home-run hitter, this is the type of play Travis can bring to a team.

Two seconds into this play, if I told you that Etienne gained 30 yards, you would have been stunned. He’s nearly wrapped up two or three times within five yards of the line of scrimmage. Then he shakes those off before dashing past the defenders and eventually out of bounds. This is just something that not everyone can do. His ability to catch the ball and get up to speed quickly makes him that much more of a threat.

One area of the game that rookie backs tend to struggle with is pass blocking. Etienne isn’t flawless in this area. On this play, he is more than willing to put his body on the line to protect his quarterback. If he can work on his ability to recognize blitzes, Etienne is going to be a three-down back early in his career.

Etienne is one of two candidates at running back, Harris being the other, to be drafted in the first round. His 48 receptions in that final season at Clemson showed that he could stay on the field for all three downs. Teams are going to love his speed. I don’t expect him to run in the 4.3s as Jonathan Taylor did last year, but he should safely come in the 4.4 range. For running backs, you’re looking for them to be drafted in one of the first three rounds. That draft capital positions them to be the lead back in their backfield. Etienne is going to be one of those guys, and he’ll be one of the first two running backs selected in rookie drafts this fall.