Is Trey Sermon the Truth? From Big 12 freshman of the year to a Big 10 playoff run, sandwiched around two subpar years. Which will it be in the NFL? 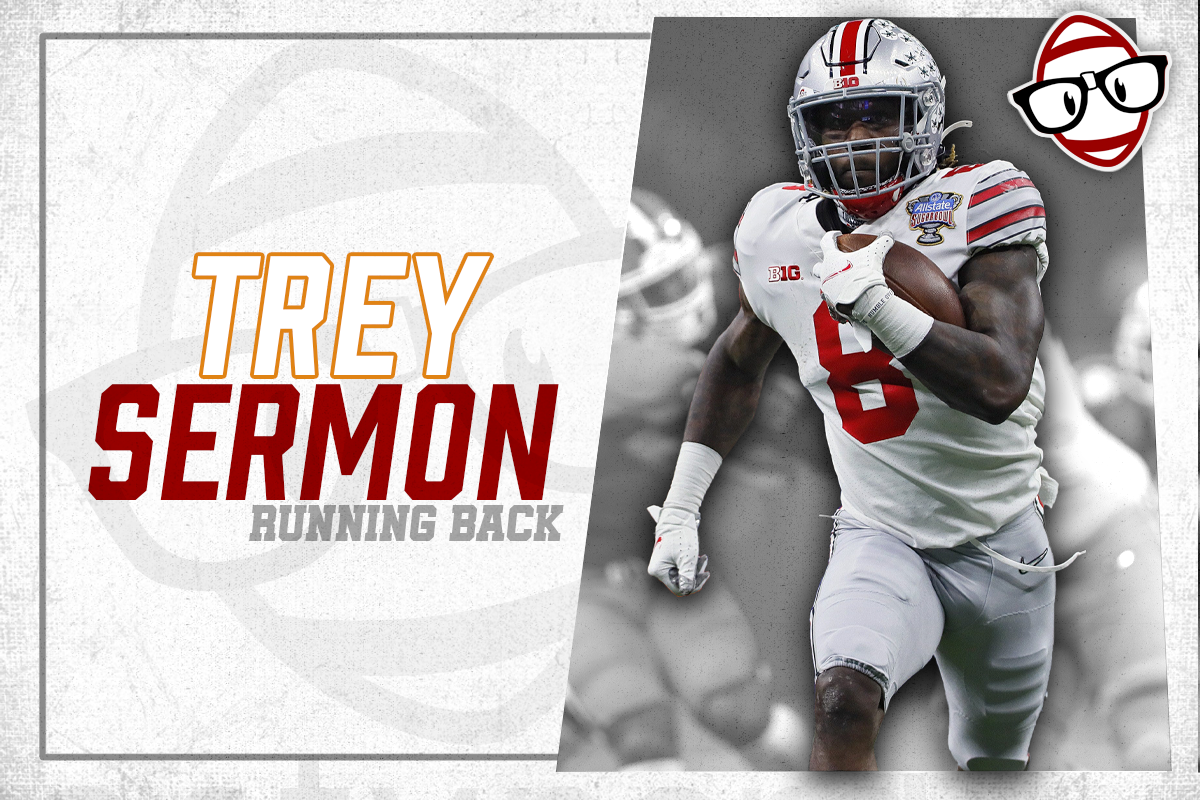 Trey Sermon transferred from Oklahoma to Ohio State before the 2020 season, presumably to improve his draft stock.

Did it work? Will Sermon be a rookie draft steal or just a letdown for your fantasy team?

Sermon is a 6′, 215-lb running back from Sprayberry high school in Georgia. A 4-star prospect, he was the #12 RB in his class and was recruited by nearly all major programs, landing at Oklahoma for the 2017 season.

He started off hot, carrying the ball 121 times for 744 yards and 5 TDs as a true freshman. The following year he earned the highest carry count but was outgained by Kennedy Brooks; during his JR season poorer play and an injury left him 3rd on the team in rushing behind Brooks and Rhamondre Stevenson.

Sermon’s transfer to Ohio State didn’t seem like a home run early in the season. He was moderately productive in a timeshare with Master Teague.

In December he took a page from the Book of Henry and went supernova, rushing for 122, 331, and 193 yards in consecutive games. Unfortunately, his breakout was cut short by an injury in one of the first plays of the National Championship game, denying him the chance to showcase his skills on the biggest stage in CFB.

Analytically, there’s not a lot to love about Sermon’s profile. The early production his freshman year is a great sign. However, it wasn’t enough to hit the threshold for a 1st-year breakout. The next couple of years are the real problem. While Oklahoma deploys a platoon, we typically want to draft players whose talent forced the lion’s share of touches, and Sermon couldn’t do that.

His sophomore season he did hit 1128 scrimmage yards, but he didn’t hit the thresholds for a breakout by Yards Per Team Play (Y/PTP) or by Market Share of Team Yards (MS/Yards). He didn’t hit them as a senior, either, though his 1.92 Y/PTP is an excellent figure.

So, no breakout age. He’s not an early declare, though that does make more sense after an injury-marred junior season. I believe he will get a partial pass there. He’s still only 22 going into his draft year, and there are plenty of good comps still, though a draft age of 21 has a slightly better hit rate.

We’ll have to wait until his pro day and the NFL draft to have all the info- a great speed score and high draft capital would improve his projections- but the data points we have at hand now aren’t favorable.

Still, it’s hard to ignore the utter domination of Sermon to close out the 2020 season. Those blow-up games he had were against the #1 and #3 defenses in college football, which shouldn’t be taken lightly. It’s a tiny sample size, but the performances warrant a deeper look into Sermon’s profile.

Sermon has a host of desirable traits. We’ll break them down in loose categories with some film to highlight each skill.

Sermon does a lot of nice things on this run. It’s a gaping hole, but he does a great job making small adjustments in the second level to extend the gain, creating tough angles for the tacklers. He’s very efficient in his footwork, shedding little speed; he finishes the run hard.

I love that Sermon has so many ways to win. He shows nice vision here, seeing the block develop and anticipating the crease. He runs through arm tackles and he he hits the DL with a stiffarm and a lateral move to escape the scrum.

And how about some more physicality:

Sermon can break tackles with power and leverage as well as flat-out evading defenders. He’s not ultra-shifty but he’s elusive in other ways (pathing, strength, burst).

Sermon may not have top-end track speed, but he’s explosive, and he has good enough speed to run away from linebackers some CFB safeties, though he does get caught on long runs.

I love the run above. His first read is closed, so he bounces to RT and accelerates past the pass-rushing DB. There was quick processing there. He uses his acceleration to beat the first safety wins the footrace to the end zone.

Nothing fancy, just a zone run to the outside. He catches the edge and turns the burners on to change a potential LOS stop into a 13+ yard play.

Sermon stumbles a bit in his juke attempt here, but he recovers well and uses his burst to extend the play. He nearly beats the DB with that stiffarm as well.

And check out these cuts:

One-cut-and-go here as he slashes through the second level of Northwestern again. You won’t see a lot of 50 yard runs from Sermon, but there’s a heck of a lot of 15 yarders.

Sermon didn’t get a ton of receiving work (12 REC in 8 games) but he has good enough chops:

He adjusts well here to a poorly placed ball, makes a smooth transition downfield, and uses his blockers well to gash the defense.

In Sermon’s recent tape, there are only a few knocks. His lateral agility is just average. He’s good at everything else, but he’s not really elite at anything- not the fastest, not the most powerful, or elusive.

Those aren’t that big of a deal though. A runner can succeed in the NFL with that profile.

Did he make a leap in skill, or work on some nuances, or did he just get bigger and stronger playing as a senior?

I’m not going to beat a dead horse here, but these are legit questions we should consider.

Sermon’s eval is tough for me at this point.

He’s been very efficient, putting up a 6.14 career YPC, and exceeding former Ohio State back JK Dobbins in RB YPC (which measures production beyond line yards) with a career 2.95.

His tape from the end of 2020 is excellent, as you’ve just seen.

So why are his MS and DOM numbers so ho-hum? Is Kennedy Brooks that good? Is Sermon a good back that had a down year?

His early production (Big 12 Offensive Freshman of the Year) gives me hope. My eyes tell me he’s good, though I want to be careful not to overvalue his senior-year play (where he was older and stronger than everyone on the field).

He has good enough size and hands to play all three downs in the NFL. I think he’ll test with enough speed to clear the thresholds at the very least (I’m guessing 4.5).

In a class that doesn’t have a ton of elite running back talent, Sermon has a good shot at getting decent draft capital. A lot of teams will prefer the versatile, 215 lb Sermon to lighter backs like Patterson, Hawkins, or Gainwell, though those guys may have better production profiles or more elite-level traits.

Sermon can succeed in the NFL if given an opportunity, but I’m not sure he’s done enough to separate himself from guys like Kylin Hill or Rhamondre Stevenson with similar skillsets. These backs will be competing for attention in the middle rounds of the draft.

I could see Sermon having his name called on day two or slipping into the 4th.

I’m not sure if Sermon’s injury in the National Championship will keep him out of the Senior Bowl, but it would be great to see him shine in the all-star game, and that would boost his stock.

In any instance, I’m interested in acquiring shares of Sermon, though where I’m targeting him will depend quite a bit on what happens in April. I can make an argument for him being as high as the 4th back off the board or as low as the 10th; that’s a testament to the flat nature of this running back class after the top few prospects.

At this point, I’m likely leaning a bit toward taking the guys with better analytical profiles before a Trey Sermon or Rhamondre Stevenson type, though draft capital could easily change my mind.