USC’s Tyler Vaughns has declared for the draft. Is he worth a late round flyer in your rookie drafts this spring? 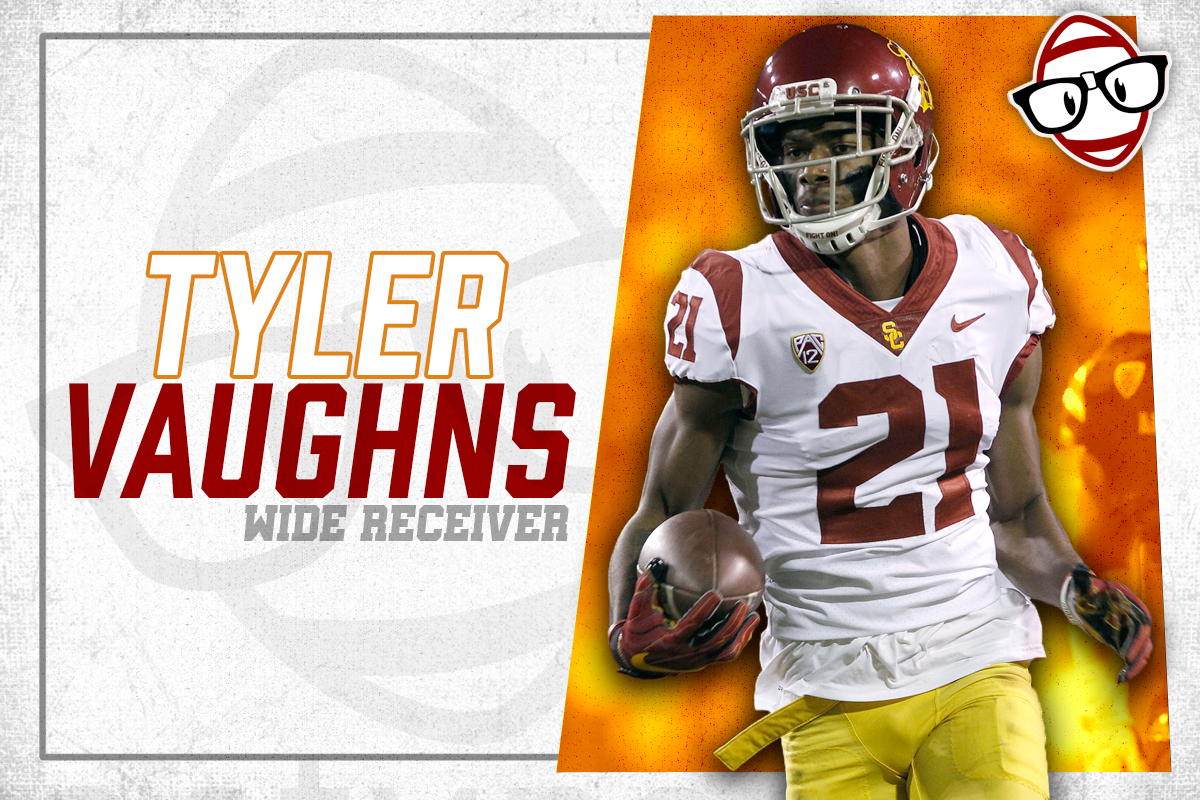 Vaughns has quietly put together a solid career at USC operating in the shadows of Michael Pittman and Amon-Ra St. Brown.

Can he succeed in the NFL?

Tyler Vaughns is a 6’2″ 190 lb wide receiver from LA Puente, California. He was the #2 ranked WR in his class (2016) and garnered various high-school honors including an invite to The Opening and the MVP of the Missouri League.

After redshirting the 2016 season Vaughns got off to a hot start in 2017 with 57 receptions for 809 yards. He posted a decent line in 2018 (58/674/6) but the emergence of Pittman and ARSB relegated him to the #3 role, where he would find himself for the remainder of his college career. His JR season was his best for counting stats- 74/912/6- though his Market Share numbers were actually a bit better as a SO and SR. He closed out his college career with an adequate 33/406/3 in six games as a 5th-year senior.

If you use the lower Breakout Age threshold of 20%, he broke out as a RS SO but with the more stringent 30% threshold, he never broke out.

That’s more or less what the stats tell us about Vaughn- he’s adequate. By which I mean he’s a good receiver, a rock-solid college starter with some traits that are above average.

Vaughn has excellent hands, and that jumped out to me in my first pass of film viewing.

He plucks this bomb out of the air- this is a ball that not all receivers catch. He shows what we call “late hands” as well, attacking the ball just as it arrives, and he’s stacked the receiver nicely.

He doesn’t win many footraces, but his technique is spot on.

I saw no concentration drops, and Vaughn typically hung on even in contested situations or when taking hits.

Vaughn shows a little burst and some crafty pathing on this one, extending the play on a stop route:

Coming out of high school his route running was a knock but he seems to have improved it; his routes aren’t elite, but they’re competent for sure.

This is a smooth dig by Vaughn with a good stutter release at the stem. Again, he’s not showing crazy sharp breaks or elite burst, but he’s showing he knows how to win his routes.

Let’s take another look at that TD catch from earlier. We can see his route on this view:

He sells the out well, looking back for the ball then breaking downfield as soon as the safety commits. Again, a pretty skillful route here.

Vaughns does some really good things here: adjusting to a poorly placed ball, showing great balance fighting through the tackle, and extending the play downfield.

He makes some nice toe-catchers as well on some other clips I don’t have available where he displays excellent body control.

Vaughn does a lot of things well; he just doesn’t do anything at an elite level.

I don’t have a timed 40 for him, but I did see it said secondhand that he ran 4.7 in HS. He looks a little faster than that on tape, but certainly towards the slower end of what we’re ok with a WR running, and he’s not that heavy or powerful to balance that out.

His moderate athleticism- without incredible routes or physicality- will likely put a cap on his upside at the next level.

As I said in the stats section, Vaughn is good, but not good enough to beat out Pittman or ARSB for targets. How will he do in a room full of wide receivers who all play at that level?

I like Vaughn quite a bit. As I’d said, rock-solid college receiver, and likely good enough to make an NFL roster.

I just don’t see the upside for him to make a huge impact in the NFL.

He has skill and know-how that will make him a valuable depth piece. He might even hit an active roster quickly if he can adjust to NFL game speed.

Still, I think if we are to see Vaughn hit in the boxscores, we’ll need a Chad Hansen 2020 / Olabisi Johnson 2019 type of situation, where injuries and attrition have opened a path for him.

The 20th best receiver in a loaded class is still a great receiver, and his smart play will land him a job, but I’ll be surprised (pleasantly) if he is a fantasy-relevant option.

The acquisition cost to get Vaughns will be low, but, at that point in the draft, I’d rather be hunting for the next Myles Gaskin (there is no next James Robinson, sorry!) than the next Steven Sims.