@FFPeeblesChamp dives into incoming rookie Zach Wilson. After a meteoric rise in 2020, find out what could make Wilson a successful NFL quarterback. 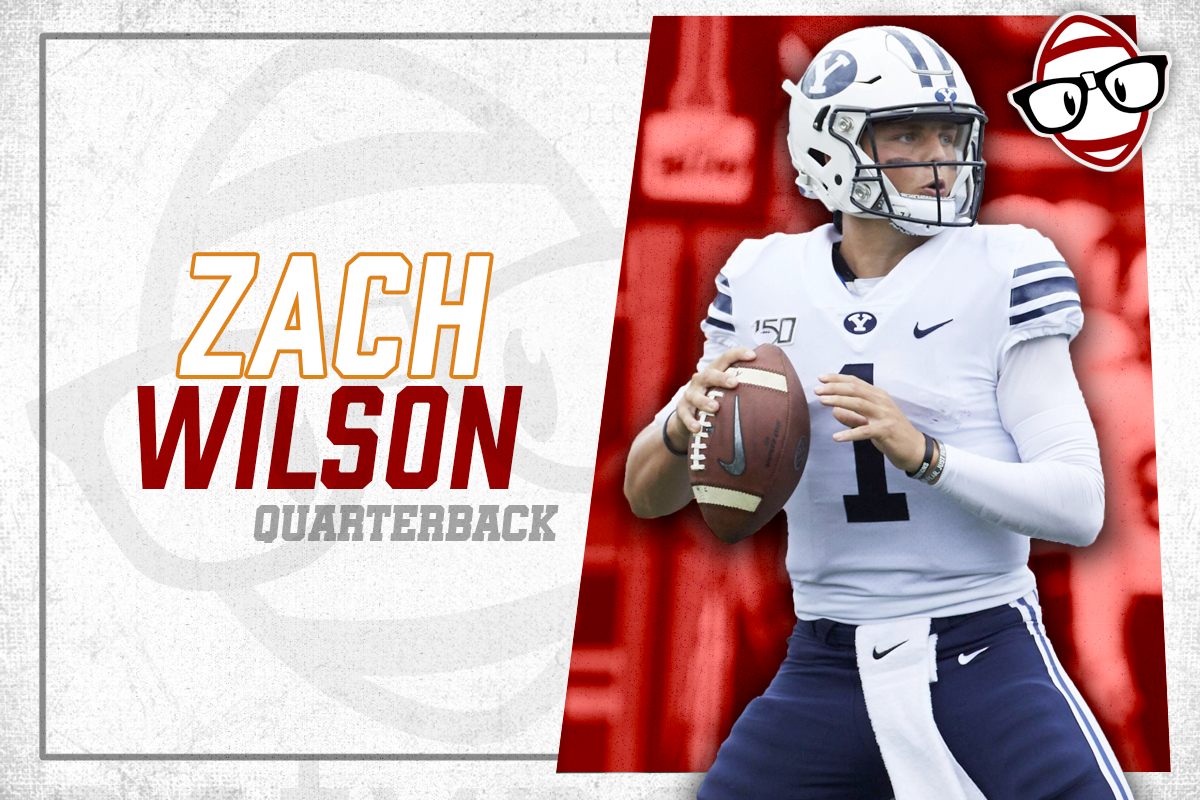 Zach Wilson enjoyed a meteoric rise in 2020, going from a likely undrafted quarterback to a potential first-round pick with a phenomenal junior season. Some analysts and pundits even moved Wilson up to the QB2 in this class. His playmaking ability makes him an interesting prospect.

Wilson was a three-star prospect from Draper, Utah, and chose Utah over offers from Boise State, Hawaii, and Minnesota, as well as several other west coast schools.

Wilson wrangled the starting job away from Tanner Mangum and started the final seven games of his freshman season. He missed a few starts in 2019 due to a hand injury that required minor surgery. Wilson wasn’t highly regarded as he was largely inconsistent but had flashes of good play. All twelve games in 2020 were starts, and he posted his best season while showing immense improvement.

Wilson completed 73.5% of his passes in 2020, second-best in the NCAA behind Mac Jones. The 3,692 passing yards and 33 passing touchdowns were each third in the NCAA, and he also rushed for ten touchdowns, best for fourth amongst quarterbacks. BYU’s games were littered with highlights of Wilson making crazy passes downfield and on the run often.

The Cougars finished 11-1 and finished 11th in the final AP poll behind their quarterback phenom. Wilson and his top receiver, Dax Milne, declared for the draft, and Wilson should see early draft capital.

Wilson is a gunslinging quarterback and plays with confidence as well as a little swagger. Prior to the 2020 season, he admits to studying the great quarterbacks, including Aaron Rodgers, and it shows in his game.

Wilson senses pressure and moves well when he feels, keeps his eyes downfield, and can throw on the move.

This play against Boise State displays the good awareness of where the pressure is coming and how lethal he is when flushed from the pocket.

This is another play in which Wilson keeps his eyes downfield, and the pressure pushes him out of the pocket. He’s not a great runner, but his running ability must be accounted for as he can cover some ground quickly on the move.

He didn’t face a ton of pressure this year. In previous years the pressure rattled him and led to turnovers. The game versus Coastal Carolina tested Wilson, they threw a lot of pressure at him, and he still almost led the team to a victory.

When it comes to pure arm strength, Wilson can make some pretty ridiculous throws. On the run, he can zip the ball fifty yards without setting his feet.

In this play, you see the pure arm strength despite how wide he sets his feet. The stance may need to be tightened up to help the throw power in the NFL, but the placement on the bomb is pretty impressive – out in front of the receiver where only the wideout could get it.

I wanted to show the deep ball again, but I loved the zip on this pass. It was twenty yards downfield, but Wilson adjusted arm angle and absolutely rocketed in the pass to a small window, hitting the receiver in stride.

As far as arm strength, he has it and is able to overcome mechanics issues, but you would like to see some of it cleaned up going forward.

Wilson has a good internal clock and flips through his progressions quickly. As plays break down, his eyes are continuously moving downfield, and he can often take a less second check down even when on the run.

On the play above, Wilson takes the snap, and within the three-step drop, he is already on his second read. He shuffles the avoid pressure, and his eyes come back to the middle, where he hits the third read in stride nearly thirty yards downfield and without setting his feet.

And on this play, Wilson takes the snap and within just a few moments rifles through what appears to be four or five reads before tucking the ball and running for nearly twenty yards. He found his options covered quickly and read what the defense gave him.

Wilson plays with passion, and he can run an offense. He makes smart plays while still being a gunslinger who can keep every play alive. There is moxie in the way he plays, which makes players want to play with him, and he is a leader.

This play sums up the command and cool demeanor he brings to the game. It doesn’t look spectacular, but Wilson kept his head and quickly gathered in the loose ball while keeping his head downfield. The play continued as designed and was able to gain over ten yards when it easily could have been a ten-yard loss.

The level of competition will always be one of the main detractions when evaluating Wilson. He didn’t face the toughest defenses in college. In a few games which he did, the pressure seemed to rattle him, so seeing how he handles NFL pressure will be critical to his development.

Mechanically, he has a quick release, and arm strength bails him out often, but his overall mechanics need work. He often sets feet far apart when throwing, and it shows in his accuracy.

With a 73.5 completion rate, accuracy wouldn’t seem like an area that needs improvement, but it was masked by receivers who made plays. The ball placement on throws was often a bit off, and typically receivers would adjust and still make receptions. This could be an issue in the NFL where windows are smaller. Wilson needs to work on his accuracy and how he leads receivers. Just getting it in the general vicinity isn’t good enough on Sundays.

I have been a huge supporter of Zach Wilson since mid-season 2019, and seeing his improvement this year was fun. The command of the game and some of the plays he makes is impressive, and he definitely has moxie to his game. The ability to be an NFL quarterback is there, but the situation will dictate his success. Wilson will need time to work on his mechanics and adjusting to the speed of the game. He has the arm, the footwork, and the brains to be an NFL quarterback but not in 2021.

The BYU gunslinger is projected to be a first-round pick in April, and a few teams are hot names to draft the young quarterback. I have seen the 49ers, Bears, and Panthers in multiple reports, and all three have possible QB needs as well as a quarterback in place who could give Wilson time to sit and develop.

In rookie drafts, he is likely a first-round pick for Superflex leagues as well. Likely in the 6-10 range, depending on the landing spot and the offseason process. In non-Superflex leagues, Wilson should be a late second round or third-round pick.

Despite some concerns with accuracy and level of competition, I would want Wilson on my NFL and fantasy teams. The passion for the game is evident in how he plays, and he can make plays – plain and simple. There will be growing pains, and I wouldn’t be surprised if he throws for 12-15 interceptions in a season early. The upside is there, and he is a playmaker with the ability to create on his own.

Subscribe to the #NerdHerd and check out many of the game films for Zach Wilson– we have five games, and our team is working on adding more every day!