Rookies on the Rise: Treasure or Traps? 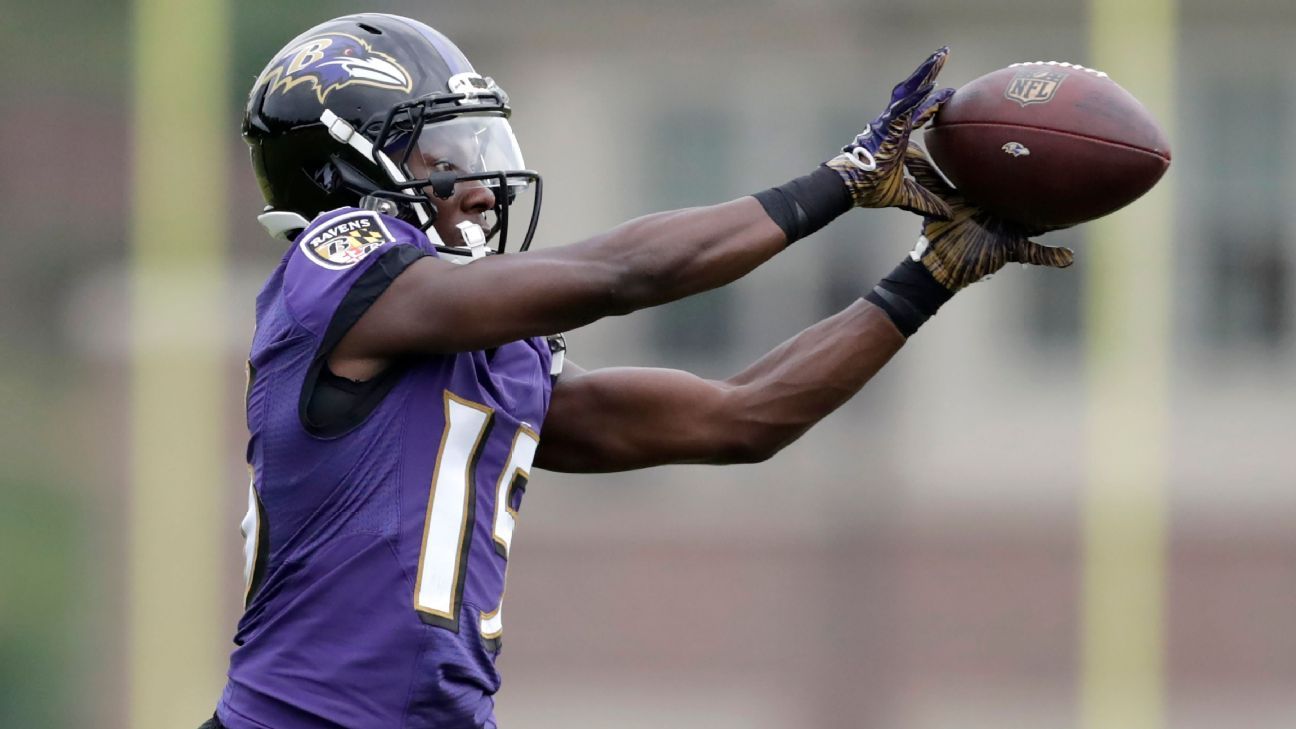 Week one was as unexpected as I expected it to be. There were a ton of “Wow!!” plays along with a lot of sloppy, undisciplined football; a few hot starts with plenty of rust being knock off. As dynasty owners, we are always looking to make transactions, but it’s typically tough to buy the marquee players without overpaying. Rookie hype with blow-up week 1 performances can be deceiving, leading us to bad trades. Low volume can also make us too cautious in buying players.

Two rookies who deserve a closer look are Buffalo’s Devin Singletary and the Ravens’ Marquise “Hollywood” Brown. Brown exploded and Singletary was hyper-efficient with his touches. Let’s look at Brown first.

Be calm; watch the tape. We need to not overreact, but we absolutely must not dismiss anything that happened. Three turnovers, 12 QB hits, 6 tackles for loss, and only 12 total first downs made it quite a long day for the Dolphins. Their 59 – 10 beating was enough to have many players reportedly looking for trades. On top of that Lamar Jackson was on fire dropping dimes, the running game was dominant, and everything was in favor of the Ravens.

Showing Out in Debut

Marquise Brown made the most of his opportunity showing off his speed, route running, and ball tracking ability. On this slant route below, Brown faces Eric Rowe who has inside leverage in Cover 1. Brown takes advantage by stemming to the outside which immediately opens up Rowe’s hips to the sideline. He sells the outside stem, jab steps, and snaps out of the break. He adjusts to a pass that was slightly below his waist, breaks the weak and desperate arm tackle of Eric Rowe, and reaccelerates to his seemingly elite home-run speed making a house call.

For a little context, this play was off of a read-pass option. This is important because it removes the deep safety from the middle of the field as he bites hard on the run action. Lamar Jackson’s ability to threaten with his feet and the run blocking success of the line makes it really tough to defend each offensive possibility. As long as Lamar Jackson has this kind of accuracy, decision making, and threat with his legs, this type of play could become commonplace.

Brown’s second highlight-reel play came on a skinny post, a perfect route against Cover 2. Brown has an aggressive release to close the distance to the safety Minkah Fitzpatrick (#29). As he reaches the safety he has a slight hesitation step (a great way to get defenders to stop their feet) then explodes to the post. Then 63 yards downfield, Brown tracks the ball over his shoulder, making the catch and taking it to the house.

There is no question of Hollywood’s star-caliber ability as a downfield threat, but his total ability could be next level with an expanded route tree. This is only the first NFL game of his career, but getting in some curls, comebacks, digs, and outs to keep the DBs off balance could solidify his value on our rosters. He did demonstrate the ability to stop quickly for a hitch route on the outside, again against Eric Rowe. Rowe was already playing off and still turned his hips upfield as Brown stemmed aggressively. The threat of his speed has to be respected which should allow him to gain substantial separation against off or soft press technique on short/intermediate routes.

Other promising indicators of success included good ability after the catch to elude the first guy and good active hands. However, there are some concerns and unknowns for him at the NFL level.

A Concern to Watch For

His size and adequate play strength are going to become issues against physical DBs that can match his speed. One play against Xavien Howard, Brown had to make contact with the CB as he was trying to get back to his line which appeared to slow him down a little. This resulted in Howard being able to keep pace for the eventual PBU on the deep pass.

This being a small sample size, we need to continue watching film against NFL-level competition to answer these questions:

Right now, consider Brown a “Boom/Bust” player with week-winning upside. He is a buy, but we are be assuming the “Boom/Bust” risk. The schedule makes it seem worth the risk, given that Baltimore sees two defenses that don’t look good: at home against Arizona and visiting the chiefs. If you decide to wait because you need a higher floor with some upside, then make sure you are watching his untargeted snaps to answer some of the above questions. If he can answer some of these as a ‘yes’ on down weeks, you will probably be stealing him.

He only got 9 total touches, but he turned it into 98 yards. This type of efficiency is not sustainable obviously, but there are still some good takeaways from this game. Positive signs for his future include starting the game, seeing some third-down snaps, and being targeted in the passing game. Some challenges are impeding his progress, like Frank Gore’s presence and Buffalo’s propensity to put the fate of the play in Josh Allen’s hands whether passing or scrambling. With that said the tape gives us more insight.

Now, what about these ridiculously efficient runs? Typically we will see only the elite pull off a couple of 15+ yard runs in a game on 14-20 carries. Singletary did this on 75% of his totes in Week 1. In this run, we get to see a little bit of why.

One reason is this offensive line seems to be at least solid in Gap and Zone concepts. Singletary brings his own tools to the well-blocked party in Outside Zone with this Pin/Pull action here. The LG (#67) gets to his block but loses his base in doing so, but it doesn’t actually matter. Singletary uses good burst to get by DE Tarell Basham, following the crease created by the center and tight end. Right as he bursts, notice his footwork; he has to adjust to avoid tripping on the feet of the fallen guard and does so without losing speed, showing good quickness. He may not have great top-end speed, but he sure seems to accelerate to his top speed well.

On this next play, there is a little bit of concern even though it’s a big play. He takes advantage of this well-blocked counter play, has one guy to beat, but got a little too cute trying to juke Marcus Maye in the open field. Singletary has pretty sweet feet in his elusiveness, but doing too much is going to cause him to leave “meat on the bone”. With good coaching and self-scouting, it should get corrected. One move, maybe two, but then take what’s given to you.

Singletary shows off a bit of his vision and creative ability as this Power run to the left doesn’t create the hole that was designed. He patiently presses the point of attack, flashes a quick jump cut to the outside, and accelerates towards the sideline. Once he gets to the open field, he isn’t afraid to finish with physicality, lowering his shoulder to get a few more yards falling forward.

He is going to be a good dual-threat if this game is any kind of indicator. Although there was the drop we will see in the GIF below (negated by penalty) and another drop on a routine pass in the flat, there was some promise for his real capabilities in the passing game. On one pass where he sprinted out on a “Wide” route, Allen threw the ball way before Singletary got a chance to turn his head. The ball was in front of his face right as he turned to look for it and he snagged it in stride. Sure it’s one target, but it at least peaks our interest in his total pass-catching ability.

Singletary was often split out as a receiver, but most of the time the ball went elsewhere. This shouldn’t be an indictment on his receiving ability; he simply was not early in the progression by design. In watching this next clip we can see an underrated element to his overall game: competitive toughness. In this play, he gets taken out by the DT, falls to the ground, bounces up, continues to play and almost makes the catch on this screen pass. Granted he would have been blown up on at the catch point, but in addition to his desire and focus, we see good acceleration and quickness to recover on this play.

Gore (one of Singletary’s major obstacles) shouldn’t be an issue for very long. Gore simply looks slower than he ever was, but he hangs on in this league due to his vision, intelligence, and durability. He should be a great veteran presence for Singletary to help him with taking care of his body and learning the game.

What should we do with this information? The sample size is so small, but we don’t want to miss our opportunity to buy at a reasonable price, right? The truth is we should buy now. Gore got two-thirds of the work on the ground, but this fact only serves to overshadow the fact that Singletary saw 70% of the snaps. Buy now while everyone is staring at the box score instead of the tape and the snap count!