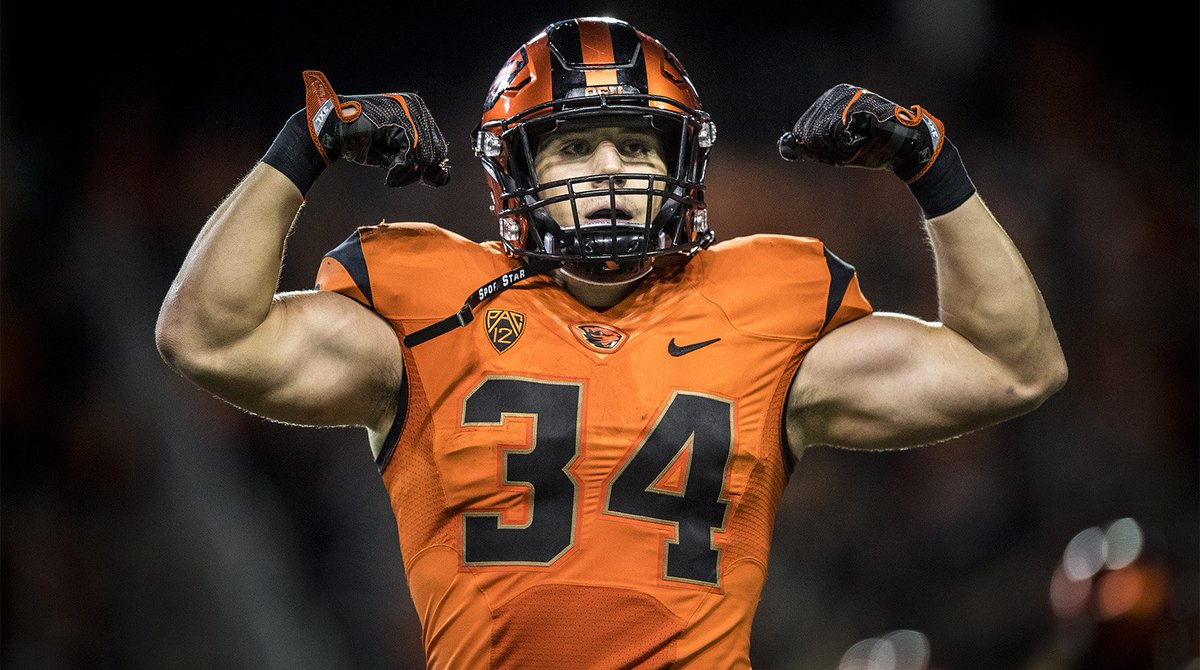 For a guy of his stature, those are impressive numbers, and scouts are starting to take note. In fact, he apparently met with 21 different teams at the combine, with most interest coming from the Lions and Vikings.

Oregon State RB Ryan Nall has been a hot commodity at the #NFLCombine: I’m being told that he met with 21 of the 32 teams today, with the most interest coming from the #Lions and the #Vikings.

Although he’s built like a TE, I haven’t seen reports of a position switch. Nall is a forceful back who runs downhill and isn’t afraid of contact. Obviously, he’s extremely powerful and isn’t an easy guy to stop on first contact. He wasn’t a feature back at Oregon State but certainly contributed his fair share of TDs. A breakdown of his college stats can be seen below:

Not only does “The Wrecking Nall” have 21 rushing TDs in the last 2 seasons, he’s also become familiar catching the ball, with 49 receptions over the last 2 seasons. The battering ram has always been able to crush tacklers, but he has also learnt to show some patience behind his O-line as rushing lanes open up.

Unfortunately for Nall, he isn’t too shifty when rushing. Despite his impressive combine agility, it doesn’t necessarily show on tape. Furthermore, it can take him a while to build his speed up to get full force. It doesn’t seem likely that he will be able to create much out of nothing at the NFL level. He’s the definition of ‘tight hips’.

NFL.com’s Lance Zierlein had this to say about Nall, “Nall is a “get what’s blocked” runner who struggles to access the agility or burst needed to work outside the tackles. Nall does offer a fairly decisive downhill option with good vision who sees the hole and will hit it without dancing. Once he gets up a head of steam, Nall is able to finish with some power, but gaining the head of steam is challenging for him at times. Nall may offer some short yardage potential, but it wouldn’t be shocking to see a team try and convert him to a fullback or H-back in the pros.”

I think Nall is someone who hears his name called on day 3. He’ll be selected in either the 6th or 7th round. I don’t think we can expect him to contribute much as a rookie. He may see some goal-line carries here and there, but I think it could take him a couple of years to develop for a team. As such, I view him as a 3rd or 4th round rookie pick currently. He has some interesting tools, but I don’t think it’s a guarantee he puts it all together.