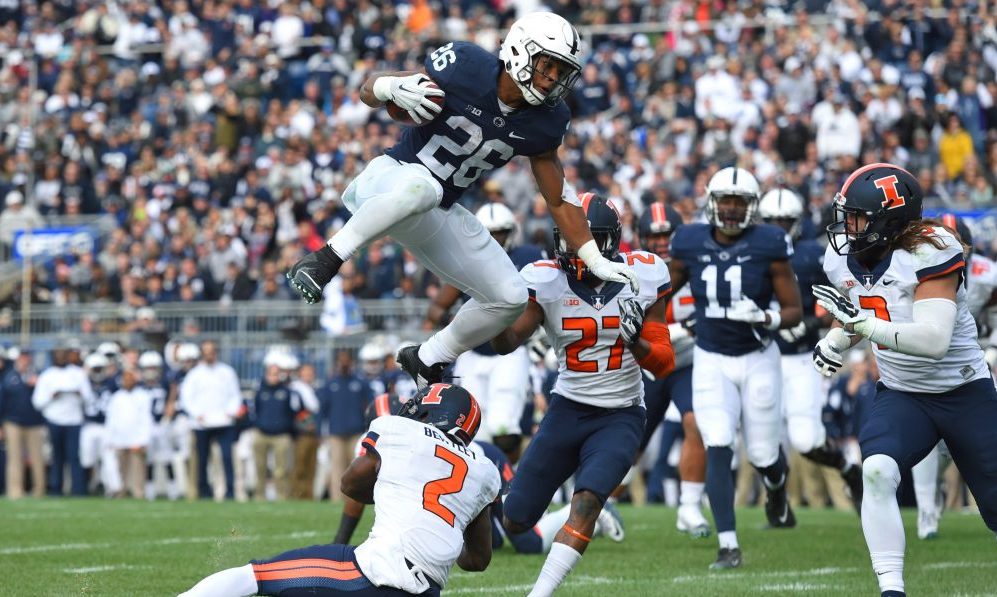 I have been playing fantasy football for about seven years now and have just recently become involved in dynasty leagues. I am currently in a league from my hometown and there is one specific owner who thinks Barkley will be a bust. I often times ask him why, and his answer is usually somewhere along the lines of, “Oh, I don’t like the way he runs” or “He doesn’t put up enough 100-yard rushing games.” I would like to tell you why I don’t see this as being the truth.

If we just look at the stat lines Barkley posted in his three seasons at Penn State, we would see that he amassed a grand total of 3,843 yards in that time. If we break this down even further we can see that Barkley ran for 1,076 yards in 11 games as a freshman, 1,496 yards in 14 games as a sophomore, and 1,271 yards in 13 games in which he was a junior.

As we can see Barkley struggles with crossing the 100 yards rushing plateau as he only broke that plateau 15 times in 38 total games in his career at Penn State. However, as we know today, the ability to gain yards on the ground isn’t the only thing NFL teams look for in a running back. This is where Barkley separates himself from the other backs coming into the NFL through the 2018 Draft. What Barkley adds in other facets of the game are huge. He can catch passes not only out of the backfield but also out of the slot, he is able to return kickoffs as well.

As a junior Barkley doubled the total number of passes he had previously caught in his career, by catching a total of 54 passes for 632 yards. This shows that Barkley has the ability to grow even more in the passing game, and he should have the ability to be used as a Christian McCaffery type next season for an NFL team. If we add Barkley’s receiving yards and rushing yardage together, we see that in his 38 games as a Penn State Nittany Lion, he broke 100 yards total six times as a freshman, eight times as a sophomore, and eight times once again as a junior for a grand total of 22 times out of a possible 38.

If we also look into Barkley’s pass protection, we see that it can use some enhancing, but he has a good idea about what his assignment is and he stays engaged in order to help protect his quarterback. To exemplify his ability, consider the final play of the 2017 Iowa game in which we see Barkley pick up a huge block on blitzing Hawkeye linebacker Josey Jewell, a star in his own right. This block by Barkley likely prevents a sack which would have ended the game.

In conclusion, Barkley has been an outstanding college running back and has shown how dominant he is by eclipsing 150 total yards 12 total times over his three-year career as a Nittany Lion. While Barkley may not rush for 100 yards in every game in the NFL, his ability to be a dominant and electric all-purpose running back will have not only NFL teams clamoring for his services, but also many fantasy football owners, and even more dynasty nerds like you and I.