@FFB_Vern gives us the scoop. Miles Sanders remains a buy low, but that window could close soon. His latest outings vs Buffalo and Chicago reveals development and promise! 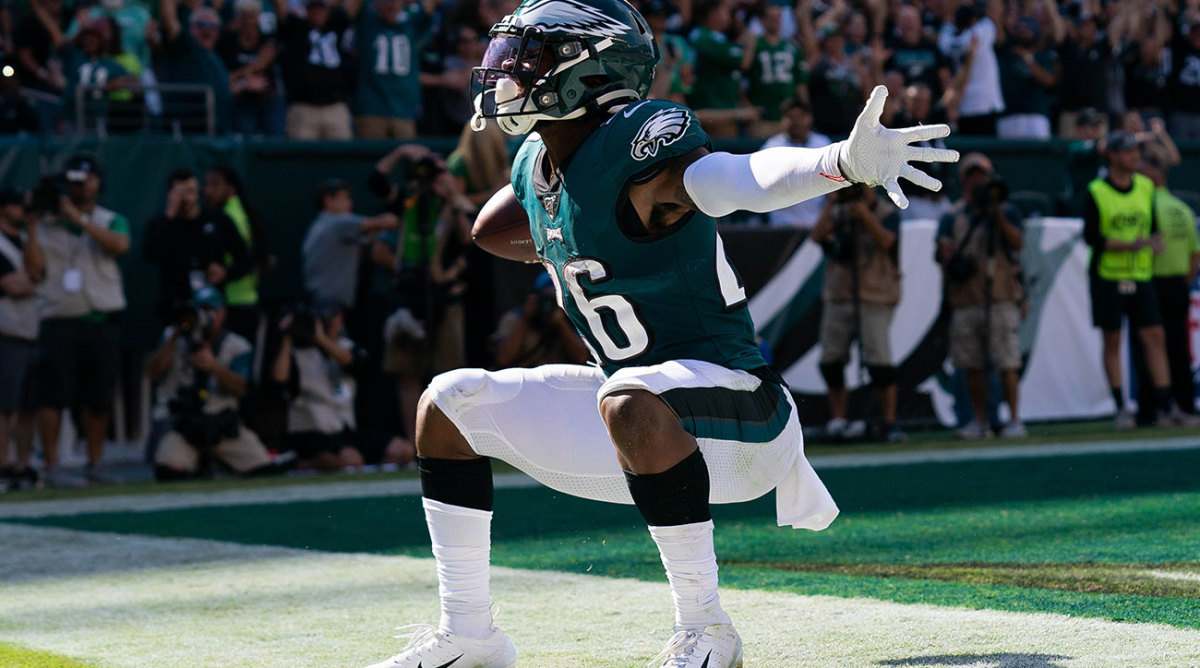 Sanders is starting to hit his stride. In week 8 against Buffalo, he totaled 118 scrimmage yards including 3 receptions and a score; his best fantasy outing from a total production standpoint. What’s more impressive is that he did this on six total touches. He followed up this performance in week 9 with a solid performance against Chicago. Prior to week 9, he had been doing his damage in the passing game, but now his vision and decision-making are starting to come together, especially in the run game. Let’s take a look at some of the latest evidence.

The best thing about this last outing is that there aren’t any bad plays really to select from. On this play at 5:38 in the first quarter, we see his speed and vision in space. He benefits from some great downfield blocks by Kelce and Seumalo, but the defense was swarming to the ball. Sanders shows his open-field vision and ability to manipulate pursuing defenders just enough to misstep, taking them out of the play. The decision to cut across the grain versus staying north and south causes first defender to miss. The cross-field cut was good because there was no one on the right side of the field behind him. Second, we see a nifty vertical step forcing the DB to misstep and giving Sanders the outside. Once the DB commits, then Sanders adjusts his feet to the outside for an additional 14 yards.

Sanders is starting to learn the value of sticking with it on runs between the tackles. On this Power run, we see that Kelce is blocking the DT, and though he is giving up ground, he is still under control. Brooks has his block pretty well made, but Seumalo misses his block on the strong side DE which allows him to make this play on Sanders. In times past Sanders would have likely bounced this to the outside with Kelce giving a little ground along his track. He must be learning a thing or two from Howard and Deuce Staley as he gets behind his pads and tries to work the narrow corridor made by Kelce, Brooks, and Dillard. This is patience and trust in on the rise; he is learning to ‘drive through the smoke’.

We see his developing patience and vision on this 2nd & 4 play as well. Showing an understanding of the game situation, this is encouraging even though he was short by a yard. He makes a correct and decisive read on this inside zone. There were some crazy good blocks by Johnson on the reach, Brooks climbing to the second level, and the drive blocks by Seumalo and Kelce. If Goedert hadn’t tripped over the DT blocked by Johnson, this is a sure first down.

The next step is for some of that patience to work its way into his feet. We can see where he needs a little more work in the Chicago game.

At 9:20 in the first quarter, we get some encouragement in this area. Watch his steps at a steadier more patient pace waiting for blocks to develop on this power concept. As Seumalo executes the pulling block on Roquan Smith, Sanders patiently waits for Smith to declare to the outside. Sanders leans his head but keeps his feet under him until it’s time to explode through the gap. Very encouraging, but gap reads are less of a burden for the running back’s mental processing.

Zone blocks, on the other hand, are much tougher mentally. On this run in the second quarter against Chicago, we can see where Sanders must improve his consistency in pacing in zone schemes. The information was right in front of him as he passed Brooks (RG) to cut upfield behind him and Lane Johnson which would have set up Agholor for the downfield block, and thus a much bigger play.

We can see the need for continued improvement in his foot discipline and mental processing speed on this 2nd and 7 run. These slight deficiencies are showing up again in another zone run. If he shortens his strides just a little as he approaches the POA then he can burst through the hole behind Dillard (LT).

Now for the biggest play of the Buffalo game. This was an excellent play call with excellent execution so there is no credit for creativity on Sanders’ part. There is still something encouraging here though. Sanders is utilizing the space along his track well. Watch as he follows the lead block of Jordan Howard. Notice how he hugs Kelce’s side of the running lane? This is sound vision and decision-making on his part as the little bit of space he creates by doing this is enough for him to escape the grasp of Matt Milano where he then turns on the jets showing very good burst and good home-run speed to make a house call.

If you have been watching Sanders for signs of improvement, these are good nuggets in the body of evidence we need before counting on him consistently. The biggest challenges facing him are his pacing and he looks to share a backfield for the foreseeable future. The good thing is that this should keep his price low, and we should be able to benefit from his explosive upside later on.

What if the split backfield situation is here to stay in the next few years? This is unlikely since Sanders’ trajectory is approaching a 3-down back, but even still there is evidence to suggest that a split backfield (when managed properly) can feature multiple productive RBs. San Francisco and Green Bay are examples of where RBBC is succeeding.

One element that seems to be consistent between these backfields is each member’s skill set has a significant overlap with the other back(s). We could assume that the reason for effectiveness is that the backs are similar enough as to not project intentions to the defense while also ensuring the playbook and the checks are not significantly bound to certain personnel on the field.

With that said, Howard and Sanders seem significantly different with Howard being the pounder and Sanders being the quicker, faster, shiftier back. The Eagles have been trying to work them both in a versatile manner where they can shine in the same play designs, and as we saw in the last GIF, they can complement each other.

Look at Aaron Jones right now; Sanders has that kind of upside. Explosive, fast, and elusive with good hands and downfield ability. Buying Aaron Jones now would be an expensive proposition. For now, there is a buying window on Sanders that may not last.

Conclusion Protocol: What We Learned In Week 9
Flexy and I Know It: Week 10 Flex Starts/Sits