Dynasty Nerds staff writers get together to re-draft the 2021 rookie class Superflex style. Who is rising and who is falling half way through the 2021 season? 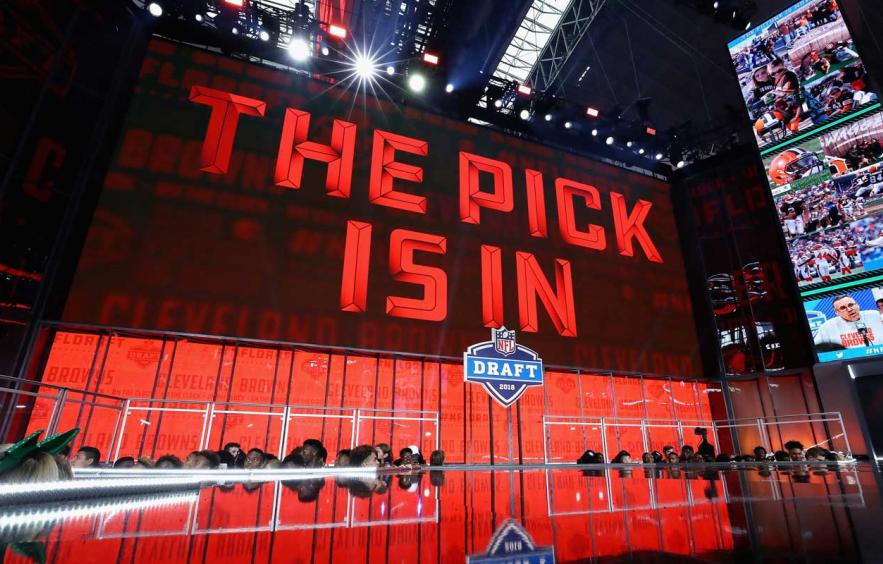 As we come to the halfway point of the 2021 fantasy football regular season, now is one of the best times to reflect on our thoughts and processes in regards to this 2021 rookie class. Dynasty fantasy football is a long term game and one that is more easily won with the ability to hit on rookie picks. Are you a fantasy manager who fell for the hype of a Darwin Thompson or Ke’Shawn Vaughn? Did you cash in on late round rookie sleepers such as Terry McLaurin or Chris Godwin? Revisiting our process and improving our rookie takes is the one sure-fire way to get better and win those titles!

This rookie mock will be assuming a 12 team PPR superflex league with NO tight-end premium.

Thank you to all of our DynastyNerd staff writers who helped in this project. You will find links to their Twitter handles throughout the article. Make sure to give each a follow as they can all help you become better fantasy managers. With that out of the way, let’s get to the fun part!

It might come as a big surprise to see Trey Lance at the 1.01 but from what I saw, he has big potential to be a QB1 in dynasty. In the two games he saw significant workload, he rushed for at least 40 yards in both. He has made highlight throws downfield with his cannon of an arm! He reminds me so much of Josh Allen and he could progress the same way. We could be talking about this kid as a future MVP and fantasy God send.

In Superflex formats, Trevor Lawrence at the 1.02 is definitely exciting to land. Although Lawrence may not exactly have the same rushing upside as Lance, he still has shown that he is capable of producing QB2 to low-end QB1 fantasy points for our fantasy teams. His draft capital ensures his security as a starting quarterback for at least five years and should be a locked in QB1 going forward. Despite Urban Meyer not proving himself as a head coach in the NFL, Lawrence has the talent to overcome these inefficiencies. Lawrence should continue to provide solid QB2 numbers in his rookie year, but has the potential to be a QB1 for dynasty managers in the coming years.

Honestly, I can’t believe I get the chance to fix my mistake here and take the best player thus far in Ja’Marr Chase. He’s done everything you can ask through six games. While a regression is likely coming later this year, to get him at 1.03 and be a cornerstone player for my fantasy football team is awesome. Heavy consideration was given to Zach Wilson, who still needs to turn it around, but Chase is as close to a sure thing at this point.

With his rushing ability, Justin Fields still has the leg up on someday becoming the best fantasy quarterback asset from this class. In Superflex, that ceiling cannot be ignored. I’d still take him over Zach Wilson and Trey Lance, and, as great as they’ve been, I’d still take Fields over Ja’Marr Chase and Najee Harris. Remember, we don’t just draft for the now, we draft for the future. Changes are certainly coming in Chicago, and we have to trust that Fields is the primary beneficiary of those changes.

Despite the availability of more instantly productive players, Zach Wilson deserves to be the pick here. It’s too early to make wide-sweeping declarations on his competency as an NFL quarterback. Despite rare flashes of brilliance, Wilson has had his share of struggles transitioning from BYU to the NFL. The injuries along New York’s offensive line and at wide receiver haven’t helped. As the Jets offense gets healthy and continues gaining experience with Wilson under center, I expect we will begin seeing more flashes of Wilson’s tantalizing upside. Do not lose faith.

I wasn’t even as high as consensus on Najee Harris before the season, but with him falling this far it’s a no-brainer. Harris’s volume has even surpassed the expectations of most, especially in the passing game as he’s the RB5 in PPR so far. The offense around him can’t get a lot worse long term, so the efficiency should eventually come to complement the top tier volume he’ll get in his time in Pittsburgh.

Lance, TLaw, Chase, Fields, Wilson, Najee…. the 1.07 for me is Javonte Williams. Running backs are hard to come back and we are seeing glimpses of what he is capable of in only limited action. He’s averaging 4.6 yards a carry and has 14 receptions in six games. He’s seen double digit carries in four of the six games but has only scored once, I like that the Broncos are slowly breaking him in and when he is unleashed, I see him as a low-end RB1 with potential for more. It’s only a matter of time…

1.08 would definitely have to be Kyle Pitts for me. Pitts has seen at least 6 targets in every game but one and is already established as the second option in the passing game for the Atlanta Falcons as a rookie this season. He’s coming off two of the best games of the season with 9 catches for 119 yards and a TD in London and an even more impressive outing against Miami with 7 catches for 163 yards. So far this season he’s been more of a large WR than a traditional in-line TE, so it shouldn’t take him as long as most tight ends to become relevant for fantasy purposes. I am honestly surprised that he fell this far and would be running up to the podium to make this pick.

Since this is Superflex, at 1.09 I’m going with Mac Jones. Jones’ has looked like the best rookie quarterback so far. He nearly beat two of the best teams in the league. He’s got a strong arm, good eyes, and is able to step up in the pocket. He looks like the perfect quarterback for Bill Belichick. He’s performing like a seasoned pro when it comes to two-minute drills. As well as the fact that he led Alabama to a national championship. Big Mac’s going to be a steady and productive quarterback for a long time. He has a lot of potential to be a better version of Kirk Cousins or Derek Carr. While Trey Lance may be the higher-upside option, I still believe the 49ers should’ve taken Mac. Quarterback is the most important position in superflex and getting a long-term contributor at pick nine is great.

It was a tough call for me here at pick ten between the two highly talented Alabama wide receivers Devonta Smith and Jaylen Waddle. Both players have already made an impact in the NFL and on your fantasy roster, however Smith got the edge for me. The former Heisman winner has played on the majority of offensive snaps for the Eagles this season and saw six or more targets in each of his first five games, which tells me he’s a clear focal point. Add to that his elite athletic ability and the fact he will only keep getting better/more involved offensively (the touchdowns are coming) – Smith is a star in the making.

The other drafters got the top ten right in my eyes, and there’s definitely a tier break after that. There are still some really good players here, but it gets a bit more dicey with these players and their situations. I wouldn’t have picked Kadarius Toney here prior to the season, and his ADP (average draft position) would suggest nobody else would have either. That being said, he’s impressed me as much as any rookie has thus far. I knew he was quick but did not expect him to be so fluid and such a good route runner. I see a bit of former New York Giant Odell Beckham in his game, and I’m buying the hype.

During the pre-draft process I had Rashod Bateman as my WR2 in this class. Given that he was hurt to begin the season I would like to lean into that evaluation more than usual. At Minnesota, Bateman had one of the youngest breakout ages we’ve seen at the age of 18.8. Breakout age is usually a strong indicator of success at the next level. Since joining the Ravens the past two weeks, Bateman has been able to secure a very impressive 20% target share. The most optimistic statistic however, the Ravens are now passing at a rate 10% higher than the 2020 offense. Lamar Jackson is passing more and Bateman is beginning to emerge as the alpha. There is no way you can let that slip past the first round!

And there we have it, your 2021 rookie Superflex draft re-do. Some amazing names have still been left out and would be great values in the early second. This includes Rondale Moore of the Arizona Cardinals; Jaylen Waddle of the Miami Dolphins; and even a first round running back in Travis Etienne of the Jacksonville Jaguars. Just goes to show how deep this 2021 draft class really was. Any picks you disagree with? Anyone deserve to get in the first round that didn’t make it? Let us know what you think about this rookie re-do draft! Be sure to follow us on all platforms for a season end redraft come this January.

If you want to mock draft yourself, be sure to become a #NerdHerd member. Included with membership is our DynastyGM tool and the dynasty mock draft platform. You can get 15% off a membership using the promo code ‘LUNA’.

Dynasty Rookie the Good and the Bad: Week 7
Devy to Dynasty Film Room: Tucker and Evans