History shows your rookie WR that struggled in year one is giving you a warning to sell while you are still ahead. 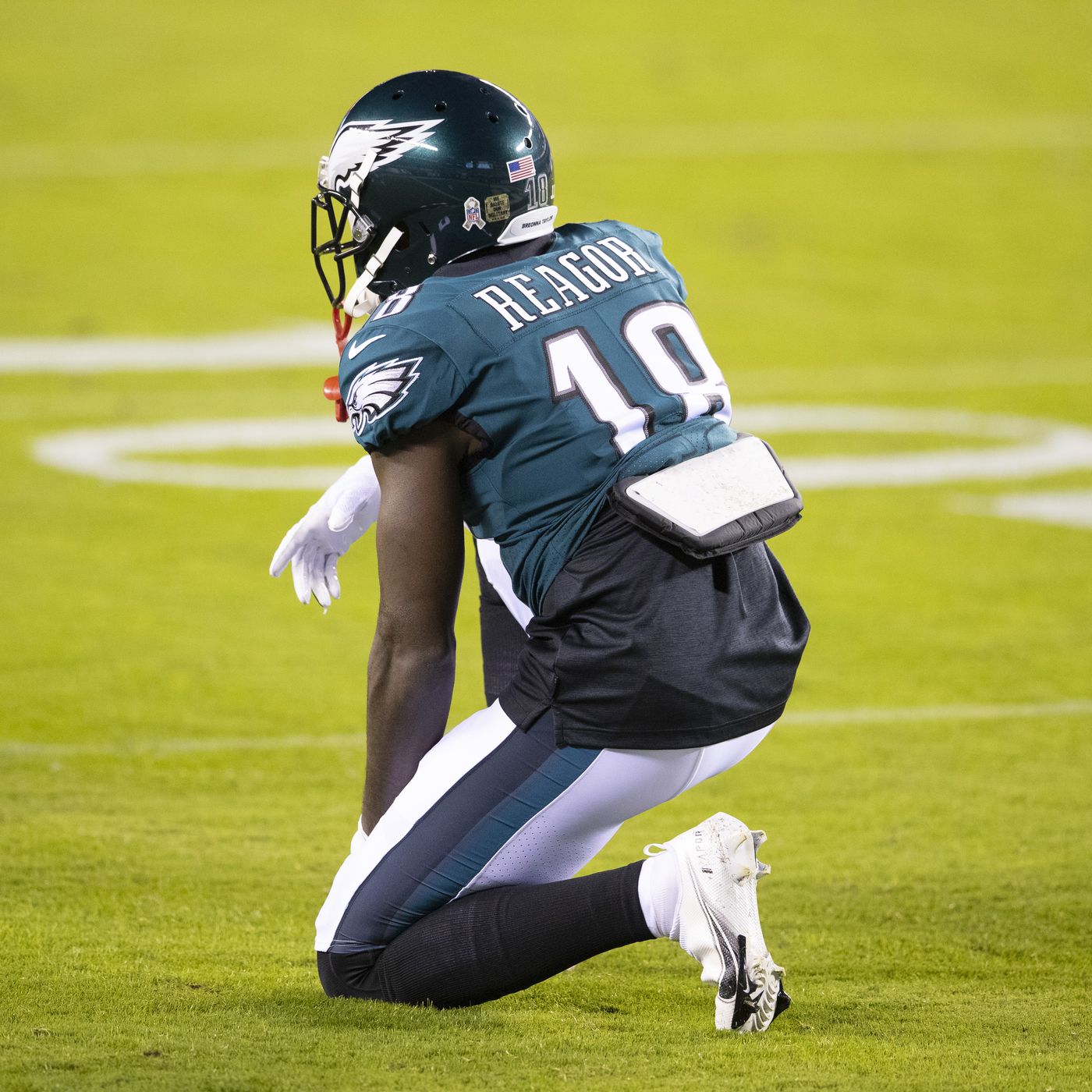 The off-season is in full swing. I’m sure you are looking at your teams across numerous leagues and starting to assess the value of your rosters. Is this the high point of a player’s value where I should sell? Will the player I believed in become the player I hoped for when I drafted him?

One of the areas managers must assess annually is the production they got from their rookie wide receivers. Specifically, those guys that did not have a splash in their first season. If you are in multiple leagues, you likely drafted a WR (the amplest position in dynasty) in last year’s rookie draft. But what should you make of a player that didn’t show a whole lot? Were they injured or healthy, in their rookie campaign?

Managers had high hopes for guys like Jalen Reagor, Henry Ruggs, and Michael Pittman Jr. last year. They may still believe there is a good chance they are going to pay dividends for their team in the future. And these managers could be right.

Are we at the bottom?

I am here with some data that will put a damper on your expectations. I believe it is already time to look at selling players like Reagor, Ruggs, and Pittman. You never want to sell at a low point. These player’s stocks may only get lower than they are right now.

Preston Williams was one of the hottest names last offseason. Dynasty owners believing that he was still worth as much as a first-round pick in a deal. A year later, that tune has changed considerably.

Let’s take a look at some examples from the last five years. These are WRs that didn’t put it all together in their rookie campaign. This will give you a better idea if your guys are worth holding onto or if you should be thinking about selling.

To set a guideline for this, I had to set the bar somewhere. What would be considered a good rookie year? Simply put, anyone who exceeds this bar had a promising rookie season, and you are right to be excited about their prospects.

I concluded that 80 points or more in 0.5 PPR format would be a good total. A line of 40 catches, 500 yards receiving, 40 yards rushing, and one touchdown would be 80 points. So something around this variation of stats is what we are looking at as the line in the sand.

I did not factor injuries or missed games into this equation. I found that missing time or having a major injury in your rookie season was not a significant component in the narrative that a bad rookie season resulted in a mediocre fantasy career. Kevin White, Josh Doctson, and Laquon Treadwell are players that missed seven or more games in their rookie years. They never recovered to become a relevant fantasy asset either. In the data, the exceptions to this (like Mike Williams) did not outnumber them.

Not Making the Grade

Here is the list of wide receivers from 2015 to 2018 that were noteworthy draft picks that did not make it to the 80-point threshold in their first year:

A few names in here you would have been right to hang onto if you had drafted them. But of this list of 36 WRs, only six (Godwin, Chark, Samuel, Williams, Davis, and Agholor) went on to average over 100 points per season in the years after their rookie year. Only Godwin and Chark averaged over 150 points per year in the seasons after their rookie campaign.

If we were to use this as law (which we never fully will), what would it tell us? It tells us there is only a 5.5% chance that a player that finishes their rookie year with less than 80 points in 0.5 PPR format will go on to average 150 points or more a year in the seasons that follow their rookie campaign.

If we eliminate the six players that turned things around and went on to average 100 points or more in the seasons after their rookie year, there are 30 receivers left from the above list. These 30 receivers had the potential of playing a total of 132 individual seasons of dynasty football between them. In only 24 of those seasons did a player eclipse the 80-point threshold. Only eight of those 24 seasons had a player scoring over 100 points.

There are exceptions. An overwhelming amount of receivers that failed to make it to 80 points their rookie year went on to never have a single dynasty season of note.

Here is a chart showing a deviation of 30 points or more between rookie season scoring and the average scoring in the seasons after a player’s first year:

As you can see, there are only 17 of the 36 players listed above that averaged 30 points or better per season above their rookie year total. Three more players in the chart averaged more than 30 points less in the seasons following their rookie campaign.

What does the other end of the spectrum look like? The guys that scored 80 points or more in their rookie campaign are as follows:

Of the 27, only ten players (Green-Beckham, Shepard, Thomas, Mitchell, Sharpe, Sutton, Miller, Callaway, Pettis, Smith) failed to lift their average in the years that followed their rookie campaign.

I know I said to ignore missed games, but two of those names don’t seem fair in Thomas and Sutton. Both would have an average well above 150 points their rookie year. That is, if they didn’t miss significant time in 2020. Thomas and Sutton have combined for four fantasy seasons above 185 points scored.

Let’s look even further back. There are an additional ten players that finished in the top 36 (the line of at least a WR3 in 12 team leagues) in 0.5 PPR in the 2020 season that were drafted before 2015. Seven of them (DeAndre Hopkins, Mike Evans, Allen Robinson, Robert Woods, Keenan Allen, Brandin Cooks, and Jarvis Landry) finished their rookie year above the 80-point bar. In contrast, three (Adam Thielen, Marvin Jones Jr., and Cole Beasley) finished below 80-points. Thielen, Jones, and Beasley are exceptions to the rule. Still, a large percentage of the WRs that are performing well today started right away in their rookie season.

You may have noticed I left out 2019 in the above data. Looking at these players with at least two seasons post-rookie year would be a better sample size for our purposes. That and 2019 is an interesting data set to look at compared to other years. Of the 17 WRs researched from 2019, only one, Deebo Samuel, had a second year on the opposite side of the 80-point bar. Samuel had 160.6 points in his rookie campaign but only managed 64.2 points in his sophomore season (a season he only dressed in 7 games).

All of the remaining 16 WRs in the 2019 draft class found themselves on the same side of the 80-point bar. We can raise it to 100 points, and no other WR than Samuel would flip sides.

Looking at the list of names under the 80-point threshold, is there any name you are eager to trade for this off-season? Maybe Parris Campbell or Preston Williams due to two injury-shortened seasons? The other eight seem like a big pass to me.

I believe the first six names listed are all highly discussed players around last year’s draft. What do they all have in common? I’m sure you guessed it: they all scored below 80 points in 0.5 PPR format in their rookie season.

Pittman, Hamler, and Ruggs suited up for 13 games last season and all eclipsed the 70-point mark on the year, but they all fell below our magic number of 80 points. Are they set for failure? Of course not. It is telling how big the gap is for the players above and below an 80-point rookie season.

We can add another layer to this. We can argue this class didn’t have the benefit of full off-season work due to COVID-19. They may have seen lower numbers because of this. It is a good point, but if you believe all of these rookies were affected by this, it is hard to explain how Justin Jefferson, in the same class, had the best rookie season of any WR we studied from 2015 to 2020.

The numbers shown are skewed. I have included WRs who would have been drafted in the third round or later of rookie drafts. If we use Rookie ADP each year to narrow our list to just first and second round rookie draft picks, there were 48 WRs drafted from 2015-2019. Of course, this cuts out several premier WRs from these drafts. Diggs, Godwin, Golladay, Chark, and McLaurin all had an ADP of the third round or later.

Looking at the 48 WRs that were drafted in the first two rounds, it is an even split at the 80-point threshold: 24 above and 24 below the bar (split between Gallup and Coleman). Of the 24 below the bar, we still have Davis, Agholor, Williams, and Curtis Samuel that became relatively successful, but that would leave us with 20 players that had a lackluster rookie season and never made an efficient dynasty career.

But as there are exceptions below the bar, there are still players like Callaway, Pettis, and Sharpe that made it over the 80-point bar their rookie year and would-be players you would not be rostering any longer.

Finally, for my last point, forget the 80-point bar or the exceptions to the rule on either side of it. Let’s break this down to a simple deviation number. We have 80 players in this data set from 2015-2019. If you drafted a successful player in 2015, you would expect them to be playing well in 2020. Six years is a reasonable life span for a WR, and our top WRs from 2015 (Cooper, Parker, Lockett, and Diggs) are still rostered in over 80% of all leagues in Sleeper.

Typically, the outcome of a player’s rookie season gives us a range of expectations and is a strong indicator of fantasy success as their career progresses.

Is your head spinning yet? I know mine is. But the ultimate long-story-short is this: the output you see from your WR in his rookie year may be more of a telling sign for their future than anything else. If we remove outside factors- injury, contract disputes, suspensions, and any other problems that can cause missing games and time. We still see that it is consistent to see the output from a player’s rookie season reflecting on their career that follows.

So, if you are sitting there with Jalen Reagor, Henry Ruggs, or Michael Pittman Jr. on your team, you may be thinking to yourself: “He just had a bad rookie season. He’ll pick it up in the next few years.” And you could very well be correct. There are exceptions to the rule. Do you you think there may be something to the madness you just read? Then you may want to get out while that player still has some value left.