An eye witness account of the Reese’s Senior Bowl through the eyes of someone who was really there. 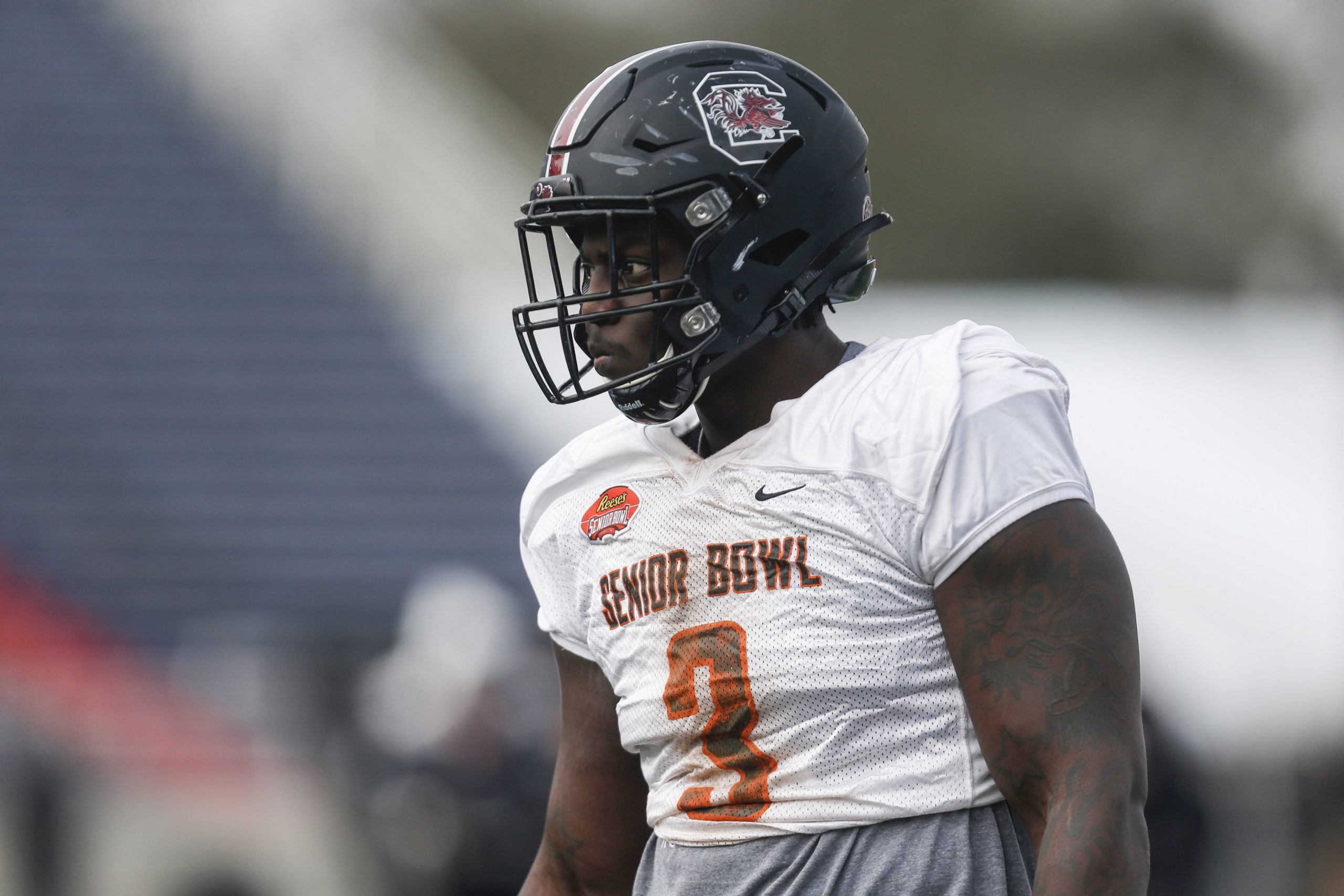 The Reese’s Senior Bowl is one of the most prestigious bowl games in college football tradition. Players from all over the country are invited to a final game to showcase their talents and abilities, many IDP fantasy football prospects among them. These are the best players in the country from D1 to D3 schools. It’s a place scouts and NFL coaches and GMs flock to every year for an up-close and personal look at the incoming draft class.

I was fortunate to make my first Senior Bowl trip as a member of the media thanks to expandtheboxscore.com, the website that hosts my IDP podcast The IDP 411. I’m going to share my observations from the week on some players that stuck out to me in an offensive player’s Senior Bowl report and a defensive player’s Senior Bowl report. The game is split into a North and South team and practices and meetings are held separately. Defenses win championships so we will start there.

It was the Javon Kinlaw of South Carolina who stole the show all week. He spoke to the media at the opening press conference and immediately stole the show speaking quietly, confidently and candidly about all things life and football. During the drills at Day 1 practice, he was by far the most physically commanding and violent lineman. The Raiders personnel seemed to show a lot of interest in him and that could be a great landing spot for Kinlaw from an IDP perspective and bolster that defensive line with another first-round pick.

Jabari Zuniga from Florida State and Trevis Gipson of Tulsa also excelled in the team drills during practice both putting on display excellent technique and speed as well as strong finishes. As the draft season progresses both of these players start climbing IDP fantasy football draft boards.

During the North Team practice drills, it was Jason Strowbridge of North Carolina and Neville Gallimore of Oklahoma University who stood out the most, displaying power, agility, and technique. Strowbridge appeared the most powerful of the group day one, looking particularly good lined up at 5 technique, and Galimore was consistently the quickest off the ball. Davon Hamilton also distinguished himself from the crowd with some good plays during 11-on-11.

The biggest day two riser, in my opinion, was Bradlee Anae from Utah. During 1-on-1 drills his physical strength was on full display. When they went to 11-on-11 drills though was when he really came alive. He routinely overpowered or got around his blocker and had what looked to be three easy would-be sacks if it had been a live game. He also made several great plays against outside runs. On another play where he was disruptive but the quarterback got the pass off, he immediately started sprinting downfield to where the ball was headed. His motor was pedal to the medal for every rep.

Bradlee Anae and Jason Strowbridge both with big plays in 11on11. Here’s Anae (#58) w an outside run stop. Assisted by #13 Bernard who’s been a vocal leader all week 👀

Check out the @seniorbowl Saturday 1:30 for game! #SeniorBowl pic.twitter.com/sIqVsTRymV

I was able to talk with Bradlee before the first practice and asked him what kind of scheme he thinks fits him best at the next level. He said it didn’t really matter, and that he’s an edge guy and one of the more polished ones in this class. For that whole interview be sure to check out The IDP 411 podcast and follow on Instagram (@idparmy)

Joshua Uche grabbed my attention several times the week. I never gave him my full attention but when I went back and watched some of the practice footage I had he definitely popped on a few plays. During one play in particular he exploded off the edge quickly for a would-be sack on college teammate and fellow Senior Bowl invite, Shea Patterson.

This is a fun one. Joshua Uche #6 (Michigan) with a would be sack on Shea Patterson #7 (Michigan) then a batted pass by Jason Strowbridge #55 (North Carolina). Don’t blink. #SeniorBowl pic.twitter.com/kXbvbGS9ON

Jabari Zuniga and Trevis Gipson again both looked fluid during drills again today. Very long and very athletic. Javon Kinlaw always seemed to attract a crowd and I heard more than one scout say he was had been the best player at the Senior Bowl on either side of the ball so far. High praise for the future first-rounder.

Javon Kinlaw.
Just some footwork but he’s a sight to see up close. Big boy with some nimble feet and a strong finish. #SeniorBowl pic.twitter.com/iBhjy6TbGA

Jason Strowbridge had a really nice pass deflection at the line of scrimmage during 11-on-11 as well as several run stops and pressures. During drills, he was the most athletic of the interior defensive lineman, in my opinion, but Neville Gallimore edged him out in overall explosiveness. Kenny Willekes from Michigan State had a big TFL in 7-on-7 that really got the sidelines and the coaches riled up. He looked like a good athlete and very focused on the field.

The most eye-popping player day one was easily Akeem Davis-Gaither, Appalachian State Linebacker.

Akeem Davis Gaither looks like he was cut out of a block of granite. #SeniorBowl

During the media scrum when I had a chance to interview him shortly, he said his goal for this week was to showcase to NFL teams that he can be a true middle of the field inside linebacker as he transitions to the NFL. From an IDP fantasy football standpoint that’s what you want and his candor about it was refreshing. On the field he was more of the same; he showcased great ball awareness and was all over the field. Wisconsin’s Zach Baum also shone, especially in drills where his fluidity changing direction stood out. Aside from that, Ohio State LB Malik Harrison appeared the most physically imposing LB on the field at  6’2 246lbs.

Francis Bernard, LB out of Utah, looked impressive. I took note of Bernard Day 1 somewhat as an afterthought. He was very vocal and active pre-snap but I was focused on other players and never gave him my full attention. On Day 2 I made a special effort to focus on him. He was consistently the first player done with on-field running and stretching drills. Always hustling to and from stations and really showcasing a competitive mindset. In drills, he was very attentive to the coaches and when 7-on-7 drills or 11-on-11 drills were going on he was always calling the plays from the middle of the field and getting guys in position. He has leadership and communication skills that can’t be taught. He made some good plays in coverage drills against the tight ends and running backs, but also gave up a few.

Francis Bernard out of Utah was the LB that stood out to me the most during #SeniorBowl. Very vocal on the field and established himself as a leader of the group early. pic.twitter.com/xv41q6Xums

He’s definitely a player to monitor throughout the draft season. He and Cam Brown, linebacker out of Penn State, were both guys I didn’t notice much Day 1 but caught my attention Day 2. Brown was very fast and had great size compared to his peers.

Zach Baun was lining up as the MIKE and the WILLlinebacker mostly. He looked a little uncomfortable and didn’t flash anything really exciting day 2 from what I saw. He was a hot commodity for post-practice interviews though. Akeem Davis-Gaither had another good showing day 2. He’s a bit undersized for your typical linebacker but he plays fast and seems to find a way to get behind the line of scrimmage. He had a nice tackle for loss to close out the 7-on-7s.

Would be TFL by Akeem Davis-Gaither Day 2 #SeniorBowl practice. pic.twitter.com/W3jrX1Yvyc

In coverage drills he made some plays and gave a few up. On one play in particular, Eno Benjamin ran right by him and gained few yards of separation but failed to haul in an easy score, bailing ADG out. TJ Brunson from South Carolina flashed some skills in 1-on-1 drills against the tight ends as well. Overall the group looks like there may be a couple of real NFL talents among them, which is encouraging given the early diagnosis of a weak linebacker class.

This is the group that I spent the least amount of time observing, but Jeremy Chinn of Southern Illinois University stood out the most physically. At 6’3 212 lbs, he looked every bit that, decisive and not afraid to come downhill with speed. On Day 2 I made it a point to watch him quite a bit. He looked fast and rangy on the field in drills, very athletic as well, going up to high-point several catches with relative ease. During 11 on 11 drills, he was lining up at the line of scrimmage a decent amount and made a few would-be tackles. He did get beat a couple of times in coverage though.

Kyle Dugger, safety out of Lenoir Rhyne looked good; he’s fast, agile and played well in coverage. Both could be IDP fantasy football relevant in 2020.

Jeremy Chinn #22 (Southern Illinois University) was the most physically imposing DB at the #SeniorBowl standing 6’3 with a 32′ wingspan. pic.twitter.com/RNEH8fQ46R

Overall the Senior Bowl was a very positive experience. I was able to see some of the best incoming defensive players of 2020 up close and personal. While there I managed to snag interviews with several players including Javon Kinlaw, Akeem Davis-Gaither, Davon Hamilton, Neville Gallimore, and Trevis Gipson to name a few.

To check those out be sure to add The IDP 411 to your podcast rotation as well as follow @idparmy on Instagram where those pieces of content will be released along with many more!