The playoffs are wrapping up. @culture_coach hits you with three WR to stash for 2021. 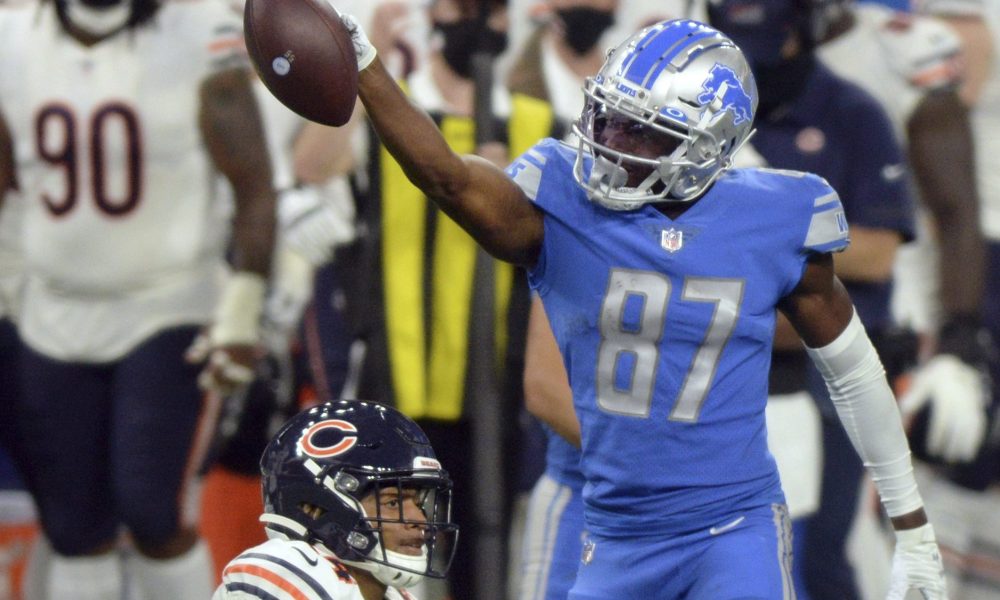 The game of dynasty fantasy football is one of patience. Sure it’s great to get those blue-chip prospects that come out of the gate scoring fantasy points in Week 1. More often though, it is using tools like the Dynasty Nerds Film Room, scouring reports like Nick Whalen’s The Graduates, and queueing up trusted resources like the Dynasty Nerds podcast.

Standard scoting has fallen out of favor as of late. Many fantasy players are going for the higher scoring ppr or tight end premium leagues instead of the more classic touchdown/yardage based standard scoring. In this article I will look at three wide receivers who went later in rookie drafts but with patience could pay off.

I’m sure you’ve heard the phrase ‘out of sight, out of mind.’ AGG has spent most of 2021 on injured reserve. When a rookie comes into the NFL as a late fourth-round pick and then gets injured, it’s easy to forget about him.

Gandy Golden was a literal man among boys at tiny Libery University. The rookie was designated to return from injured reserve on December 15th and the Washington Football Team has three weeks to activate him. If your league does not have a trade deadline AGG is the type of player you can try to get as a ‘throw in’, who could pay off next season as the complement/red zone threat across from Terry McLaurin.

Drafted by the Lions in the fifth-round with pick 167, Cephus was not expected to make much of an impact. Cephus was pressed into starting week one with Kenny Golladay out and played well, even if the numbers didn’t reflect that. As fate would have it Golladay suffered an injury in week eight and Cephus has been playing about 45% of the snaps the last six weeks. The stat line of 10/14/156/1 during that time isn’t going to blow you away, but the experience he is gaining is priceless.

Cephus is the only Lions WR under contract for 2021. I do expect the Lions to try to resign some of their receivers but Cephus is primed for a starting role in Detroit in 2021. Highly touted first round pick, defensive back Jeff Okudah, gave Cephus this endorsement.

The 2020 Jacksonville Jaguars season is quite literally a, well I’ll let the Talking Heads explain…

There was Minshew Mania, but that turned out to be shortlived and it doesn’t look like there will be a sequel. Leonard Fournette was jettisoned in traning camp in favor of undrafted rookie James Robinson. DJ Chark could not replicate his sophomore breakout. Well, heralded weapon Laviska Shenault will be back in 2021, however, I’m stashing fifth rounder Collin Johnson.

Jacksonville grabbed the Texas Tower with the 166th pick and he has played in every game.

The Jaguars are a team in transition. Shenault, Chark, and Johnson are the only wide receivers under contract after this year. Johnson has shown some flashes and there is a place in the offense for a 6’6″ wide out with decent speed. He would seem to be a perfect complement to Chark’s speed game and Shenault’s Swiss Army Knife skillset.

So why do these three guys work for standard leagues? As I said in the intro, standard leagues are about yards and touchdowns. All of these wide receivers possess good size which will give them an advantage in the red zone. These three have also shown enough that I expect them to be back next season and each a rung or two higher in the pecking order.

Thanks for checking out my article. You can find my standard rankings in the Nerd Herd. For just $2.99/month you get extra podcasts, rankings, the dynsaty film room, and more. If you are feeling frisky bump all the way up to the DynastyGM/Nerd Herd bundle for just $4.99. The DynastyGM is changing the way you manage your dynasty leagues. Rankings, players shares, league analyzer, team portfolio, trade calculator, and much more on the way.

Check out my podcast The Fantasy Football Roundtable, we talk dynasty, redraft, prop bets, and more. Part of the Drive In Podcast Network.