@Glosser13 put together a solid crew to bring you the first edition of the SF/IDP Rookie mock. 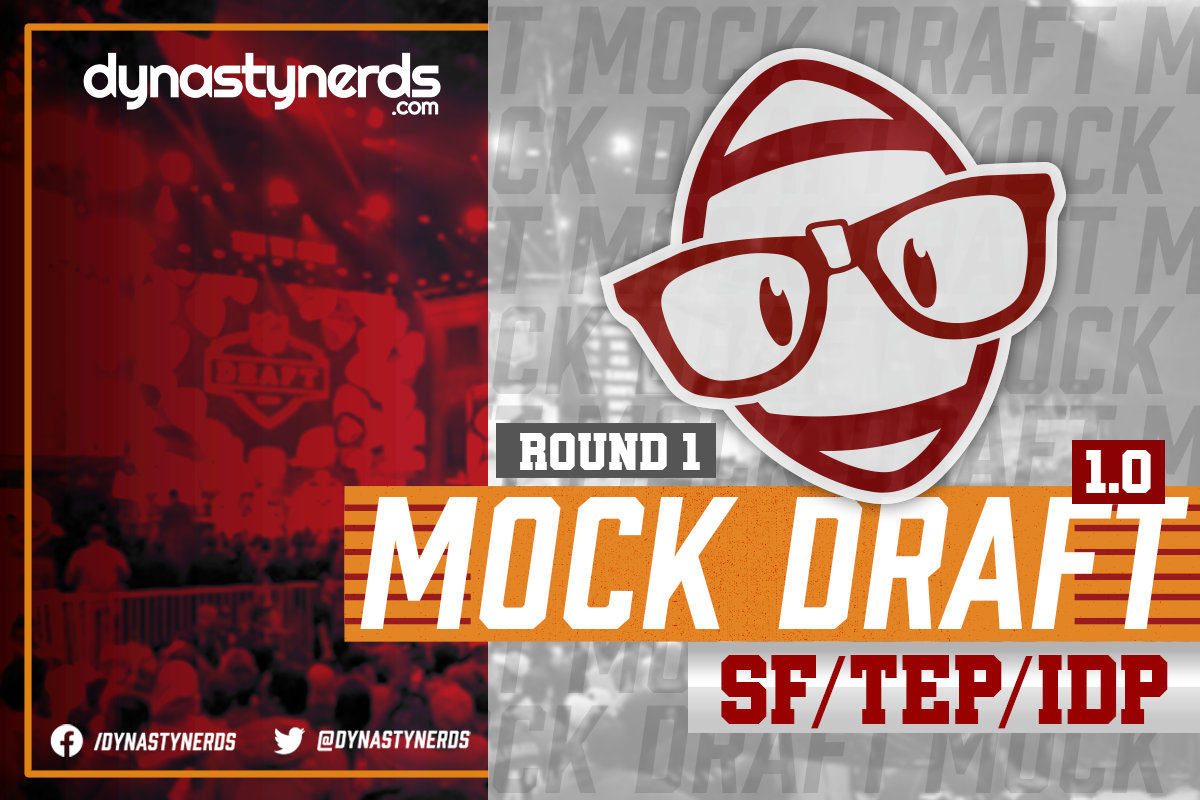 Greetings Nerd Herd! We are excited to bring you our first super-flex, IDP mock draft. The NFL draft is approaching as is your league’s rookie draft, we are committed to giving you the best advantage as early in the off-season as we can. We hope to give all the fellow Nerds an early look into rookie values and where you can expect players to go in a five-round draft.

Najee Harris stands head and shoulder above the other RB prospects in this class and is as close to a bulletproof prospect as you can get. Those are the types of players I’m willing to spend high capital on. It may not be academically sound to not take Fields here but if you just glance at current SF ADP data. Joe Burrow is currently going multiple spots behind Johnathan Taylor in startups but Burrow was the “1.01, generational prospect of a lifetime” in SF leagues less than a year ago. But can’t get ahead of Taylor in Superflex startups? There’s a disconnect between rookie pick value and true player/league value. Look for context clues like this to exploit in your leagues.

The second best QB in the draft and likely to be drafted by a team looking for a franchise QB. Good chance to start first year giving great Superflex upside. Very strong arm with good running upside as well.

One of the top QB’s in this class, Wilson is projected to go very early in the draft and could potentially see the field right away. I like his upside as a passer and his mobility in and out of the pocket. With this being Superflex, I like grabbing a QB who has the potential to be a starter for years to come.

Jamar Chase is the top WR in a pretty deep class. Three QBs off the board early made this one a no-brainer. I’ll take the position that has the longest shelf life in dynasty fantasy football outside of QB. The last time we saw Chase lace up his cleats he was capping off a record-breaking season in the ACC that included 1,780 receiving yards and 20 touchdowns.

This class is fairly deep everywhere except at RB. Travis Etienne is electric and capable of changing games on every single run. Etienne has almost become underappreciated because he’s been so good, so long – he’s a difference-making RB. Easy pick here.

Say what you will about his size in the NFL, give me a guy that gets open and makes plays after the catch. Was the best player on the best offense in the country in 2020 and led all WRs with 693 yards after the catch in the regular season – over 100 more than the next closest WR.

With his physical tools, Trey Lance‘s upside is too much to pass on here in SF formats. The NFL scouts believe in him and I believe by the time he’s drafted to an NFL team he won’t be available at 1.08 in any Superflex rookie drafts.

For the tight end premium format, I feel comfortable selecting a prospect with truly unique skills for the position.  Pitts is without question the premier tight end of 2021 (and perhaps superior to the tops in recent years). I am happy to lock in a difference-maker at the 9th spot.

Parsons has the potential to be a top 5 LB for a dozen years. We aren’t there yet but can’t miss IDPs like Micah are going to start being top 5 picks in a few years. In this format, defense wins championships and in the last few years if you had drafted studs like Micah, Chase, White, etc. over gambling at the 4th/5th best offensive positional pieces you would be counting rings.

Williams is built to carry the load. He is a capable pass-catcher out of the backfield, but with the ball in his hands he tears off chunks of yardage. Not the homerun threat that some of the other backs in this class are, Williams can make something out of nothing and has a nose for the end zone.

There are very few holes in Bateman’s game, this past season he proved he can play out of the slot. Bateman’s value will skyrocket once he hits the field for an NFL franchise. He is a jack-of-all-trades who can impact the receiving game at all three levels, screens, slants, and go’s.

Round one is in the books, stay tuned for rounds two through five this week. I want to give a huge thanks to all those who participated in this mock. Please make sure to give them all a follow on Twitter and continue to support all the great content creators in the community. As always your continued support of the dynasty nerds brand is appreciated and we look forward to helping you build those championship teams.