@Glosser13 and the Nerds team is back for round 3 of the SF/IDP mock draft. Will this be the round that the big IDP run happens? 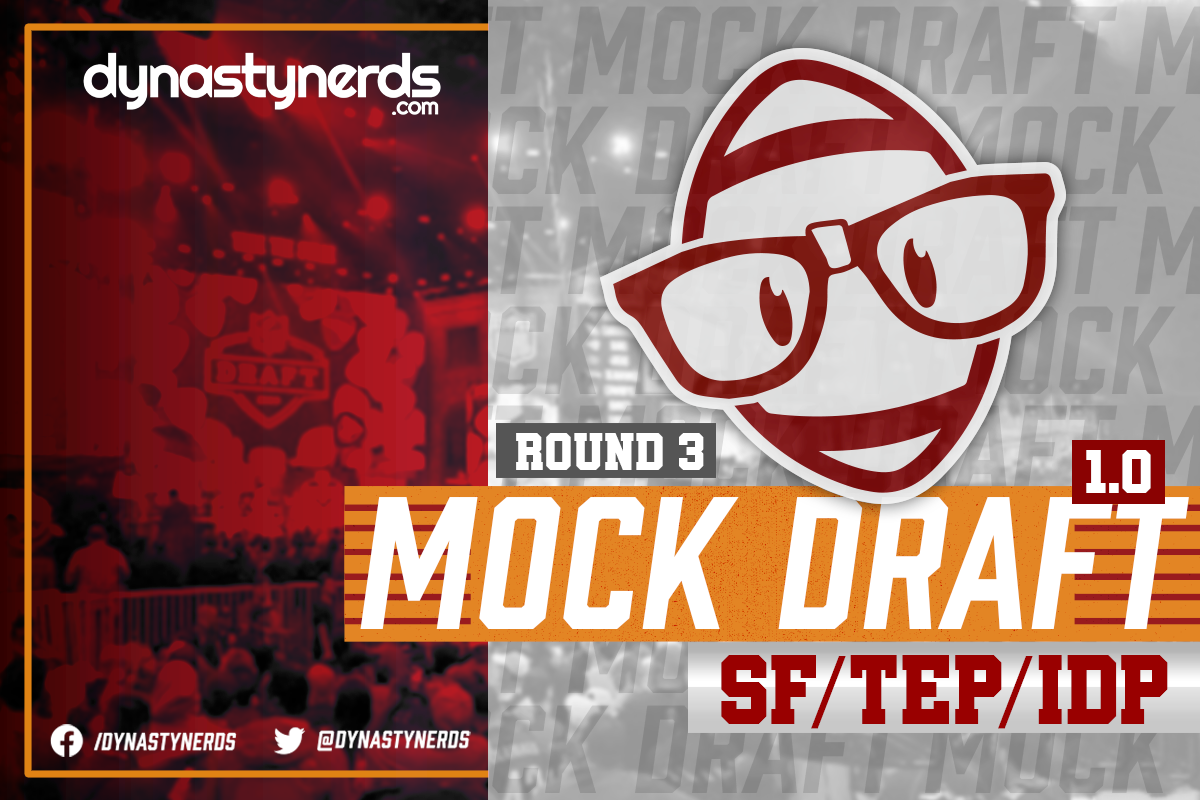 Welcome back nerds, as we move onto Round 3 of the 2021 SF/IDP rookie mock draft. This is the round that can make or break a dynasty rebuilding team. Let’s take a look at how this round played out as our staff breaks down each pick.

You can find Round 1 here, and Round 2 here.

If you are looking for a linebacker that will rack up points, look no further than Nick Bolton. Although Bolton is on the smaller side, he can sneak in between the tackles and make those tackles for a loss in the backfield.

It’s ok to wait on QB in Superflex. At least that’s my thought process. Assuming at least two starters are in place already, I was very happy to get a player like Mac Jones this late. He’s much more of a project than the QBs taken ahead of him; however, he could end up on an NFL field sooner than later with decent draft capital. A steal this late in the draft, and one that makes taking Najee Harris at 1.02 feel more than justifiable.

Ojulari has the most potential of the edge class. Still young, he wreaked havoc on the SEC as a sophomore. He is a three-down EDGE and has a solid array of pass rush moves. Great grab in the third. He is super athletic with great bend and passes rush counters.

Collins has the size (6’4’’ 260lbs), athleticism, and versatility NFL teams will love. He can make an impact against the run, in coverage, and as a Blitzer from inside and off the edge. With his knack for the big play, Collins is a potential star in the making and is one of the best IDP assets in this class.

The third round is when I expect a big IDP run to happen. I’m happy to land JOK, who can be an instant producer for IDP managers. The Notre Dame linebacker has produced 96 solo tackles, seven sacks, five forced fumbles, four fumble recoveries, and one defensive touchdown in just 25 career games. I love his versatility and ability to make impact plays.

I love the passion and power Jones plays with. He has not reached his potential – not even close – and he’s my EDGE2 in this class on upside alone. I am trying to get him everywhere I can.

Kwity Paye can play all three downs, maximizing his fantasy potential by piling up points against the run and utilizing his size and athleticism to win his pass-rush reps and rack up some sacks.

The IDP run continues here with Jaelan Phillips, who flashed massive potential in 2020 after an injury-plagued start to his college career. He tallied eight sacks and 15.5 TFLs in ten games this season and should be a good producer in the NFL if he can stay on the field.

Michael Carter is a smaller back but possesses the hands and burst to make him a valued piece in a modern NFL offense. In the late third, I’m happy to take a chance on a skill set like his.

After feeling like I was able to take the top rookie at both DL and LB, I look for upside on offense. Kylin Hill has the upside to be a viable fantasy asset if he lands in the right situation. I couldn’t resist this upside late in the third round.

Browning has plus-size and plus-athleticism but needs some refinement in pass coverage. He has the versatility to play in multiple defensive fronts. Coaching will be key to Browning reaching his potential.

Moore is an elite WR who produced at an unreal level this season. He is the only receiver to have as many 200 yard games as DeVonta Smith, the Heisman Trophy winner, with a lesser QB throwing him the ball. His route running ability flashes, and he is an explosive playmaker with the ball in his hands.

We made it through three rounds with a monster IDP run in round three. Only four offensive players come off the board. This is typically the round where defensive players historically go, and our drafters seemed to be thinking the same way. Stay tuned for the remaining two rounds to see who the late-round sleepers are.