@Glosser13 and the Nerds staff bring you the final two rounds of the SF/IDP mock. Check out who the late round value players are. 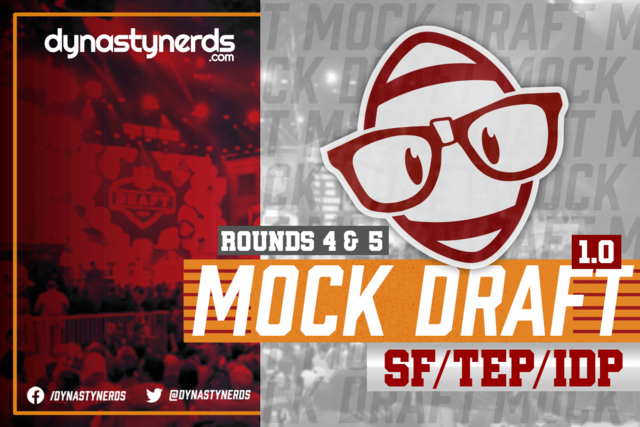 Welcome back to the final two rounds of the Dynasty Nerds SF/TEP/IDP rookie mock. You can find Round 1 here, Round 2 here, and Round 3 here.

Before we breakdown the final picks, I want to thank all those who helped with this mock. Click their names in their picks and give them a follow on social media. I know as a dynasty player just how important mock drafts can be as a point of reference when you are on the clock during your league’s rookie draft. We hope to have helped give you an early indication of where rookies are being valued a month before the NFL draft.

He has great size (6’3″) and speed but is lacking in the route tree. Seth Williams could be a steal in the fourth round and be a red zone threat at the next level.

Moehrig is the first defensive back off the board, and I got the guy I’m most intrigued by. Trevon Moehrig is what I like in a defensive back, a playmaker. He leads all safeties in college football in 2019 and 2020 in passes defended. One of my favorite impact plays. Moehrig is also a solid downhill tackler and could be an immediate starter. I could see him with a similar rookie season as Antoine Winfield Jr in the right landing spot.

Surratt is a perfect mold of today’s NFL linebacker. He has good size and athleticism with a nose for the football. Surratt is very fluid in coverage and has a great understanding of zones which is aided by the fact he was a former QB. Surratt has already proven to be a top-five LB in this class with only three years of experience at the position. The sky is the limit with his potential.

Making the jump to the SEC from the FCS this past season, Cox showed he could be effective at any level. Cox has good size and possesses a desirable three-down skill set as he is very good in both man and zone coverages. Snaps and opportunity are key in IDP, and Cox has the potential to be an every-down player at the next level.

A pure upside pick in the middle of the fourth round. Kyle Trask thrived in Dan Mullens system in 2020, throwing for over 4,200 yards with 43 touchdowns and only eight interceptions. A taxi squad stash who could develop under the right coaching.

I wanted Elijah Moore, but Carl Vagle hates me. I loved watching Cisco play in college, and he should be a day one impact player, a safety who can rake in the tackles and make some big plays.

Dangerous after the catch, Toney has good hands and gets up to speed quickly. There have been talks of Toney in the first round in the NFL Draft, so this is a value that I cannot pass on in round four.

Happy to land Dyami in the late 4th here. A fluid athlete that is an exceptional deep threat and a strong separator. He supposedly has added weight in the offseason, which will help with one of his main concerns- the inability to defeat press coverage.

Basham is stout against the run (high floor) but can also rush the passer (high ceiling). He will likely be a Day 2 selection at the NFL Draft, and I’m psyched to acquire him in the late 4th!

Jevon Holland was a 2020 season opt-out. He collected 108 tackles, 9 interceptions, 10 passes defended, and one defensive touchdown in his first two seasons. I like his chances to find a role as a rookie and produce as an IDP scorer.

Small school prospect with 15 touchdowns in college. Looking to take an upside WR this late in the draft and hope he can increase his value.

Jaret Patterson has done one thing in college, produce. Draft capital will play a huge role in where Patterson’s value is going into 2021, but he can play the RB position at a high-level. He just needs the opportunity to show it. I look at him as this year’s James Robinson.

That will do it for the first edition of the Superflex/TEP/IDP mock draft. We look forward to bringing you a few more of these as we get closer to the NFL draft. We will release one after the draft to see how much values have changed once we know landing spots. You can find me on Twitter @Glosser13, don’t hesitate to reach out about anything. Keep putting in the work and improving your process as a dynasty player, and you will improve your chances of collecting more dynasty championships.