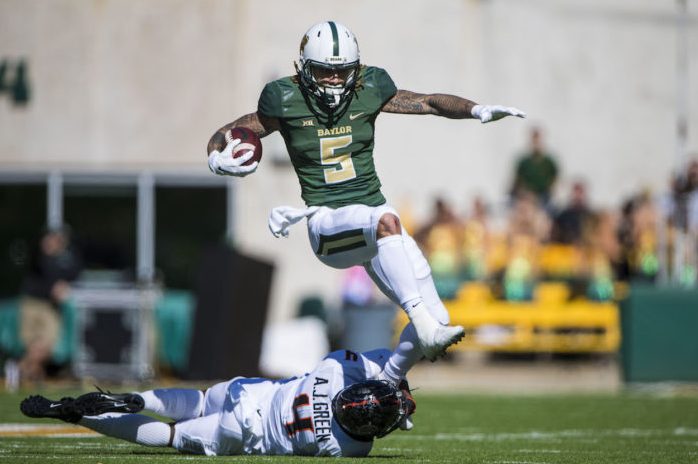 In the 2019 NFL draft, Shanahan’s 49ers surprisingly selected Jalen Hurd in the 3rd round (67th overall). The former Baylor Bear was selected ahead of the likes of Miles Boykin, Hakeem Butler, Kelvin Harmon, and Terry McLaurin.

Not only was it a surprising draft capital investment, but the selection also brought intrigue due to Hurd’s diversified skill-set in an offense orchestrated by a guru. Since the selection, Shanahan indicated that Hurd would initially lineup at Wide Receiver, however, he may also see snaps at Running Back, Fullback, and Tight End.

The 6’5”, 226-pound hybrid certainly has the skillset to thrive in different areas of the field due to his previous playing experience, prior to the NFL. Hurd began his college career at Tennessee as a Running Back. He was a pretty good one, too. He recorded the most rushing yards in a season since Arian Foster in 2007, for Tennessee. He was also the team’s leading rusher over the likes of Alvin Kamara and John Kelly.

He was truly the Vols’ workhorse carrying the ball 589 times in 3 seasons. In October 2016, Hurd received a concussion and a few ankle injuries. In order to prolong his career, he asked the Tennessee staff to make a position change to WR. The Tennessee staff resisted the change, as such, he transferred to Baylor and had a promising Senior season as a WR before declaring for the draft. A breakdown of Hurd’s college stats can be seen below:

Hurd knew what he was doing with his position change. He stated, “I didn’t just do this on a whim. I researched it. Running backs last 3.5 years in the NFL. Wide receivers can last 10 or more years.”

Since being drafted, Hurd has instantly begun work with the 49ers WR coach, Wes Welker. With regards to his TE eligibility, 6’5” and 226 pounds is quite the physical specimen. Keep in mind, the likes of Noah Fant are 6’4”, 249 pounds, and the 49ers had spent quite some time interviewing Fant prior to the draft. If they chose to go that route, he’d certainly have to add some pounds, but it certainly wouldn’t be out of the question.

It’s clear that Shanahan plans to use him all over the place. I think that could be something that’s more valuable to an NFL team than a fantasy team. My worry is that he moves around so much that he never really provides consistent reliable production, regardless of the high draft capital.

Who knows with Shanahan though?! He has a physique similar to Terrelle Pryor who also had a similar position change and Shanahan always finds ways to get creative and gets the ball in his playmakers’ hands. There is upside here as he could get some goal-line carries at his size, on top of his WR targets.

Prior to the draft, Hurd would have been a 3rd or 4th round selection in my rookie rankings. There’s still a ton of competition in San Fran. Kittle, McKinnon, Deebo, Pettis, Coleman, and Goodwin will all still command a lot of targets. But the 49ers’ enthusiasm and capital invested in Hurd make him worthy of a late 2nd or early 3rd round pick now.