Week 15 is upon us! Will TY Hilton keep up his hot streak? Can you start all the PIT WRs? @tristancook_ is here with your WR start/sit answers. 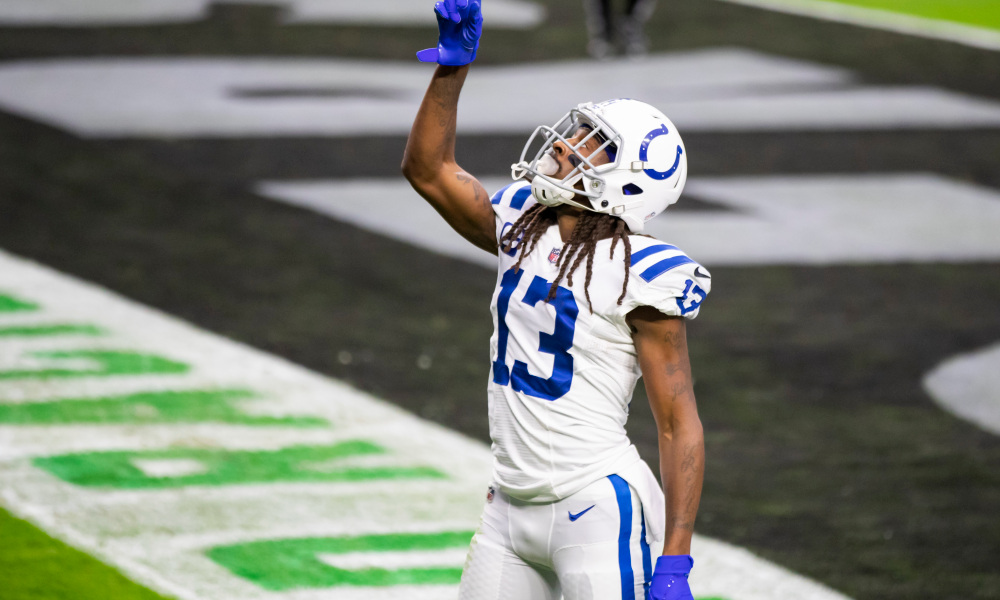 There isn’t really a good way to sugarcoat this. Last week was a bit of a rough week. My best call was to start JuJu, and my worst call was probably to start Mike Evans. But, if you’re still alive in the playoffs, there’s no time to dwell on the past. I have to look forward to this week and do better. So, let’s get to it.

My first ‘start’ this week is Diontae Johnson. This feels like a “get right” game for the entire Pittsburgh offense. They are coming off of back-to-back losses where the offense looked suspect, at best. The Steelers need to iron out the kinks before the playoffs, and thankfully they get to play the Bengals this week. I know Diontae’s struggled with a case of the drops lately, but even in a game where he was “benched,” he still got seven targets last week.

I expect to see Pittsburgh use a heavy pass-oriented attack this week. They have the second-worst per game rushing total, and James Conner is dinged up and may miss this game. Furthermore, the Bengals defense isn’t particularly good against the pass. I know there’s some apprehension around Diontae because of the drops, but I expect him to have a big week.

My next two ‘starts’ are also Steelers’ WRs. As I mentioned, I am very bullish on the Steelers’ WRs this week. Chase Claypool has struggled a bit of late, only catching 11 passes for 105 yards over the past three games combined, but I believe things are going to change this week. Despite his recent decline in production, Claypool is having an outstanding rookie year and has shown plenty of promise for the future. In the first meeting, he scored two TDs, and I expect him to, once again, have a good game against Cincinnati.

As promised, the next ‘start’ is the other Pittsburgh WR. I have been on the ‘start JuJu’ train for most of this year. With the emergence of the two aforementioned WRs, many people have been ready to dismiss JuJu as somewhat of an afterthought. However, he has been the best fantasy WR for the Steelers this year and is once again my favorite PIT WR for the week. As I’ve said, I expect the entire Steelers passing offense to produce, but if I had to pick only one WR to start, it would be JuJu.

I will admit that he doesn’t quite have the extreme upside that he used to have, but he seems like the safest and most consistent option every week. He’s still a major part of this offense, and most importantly, Ben trusts JuJu, so he’s willing to target him regularly. I feel very strongly about JuJu this week.

My next ‘start’ for Week 15 is a repeat from last week. I am once again rolling out Mike Evans. Unfortunately, I hadn’t expected the Bucs only to attempt 23 passes, so while five targets isn’t exactly a big number, it was still over a 20% target share for the game. I expect Tampa Bay to need to rely more heavily on the pass this week after the injury to Ronald Jones. Leonard Fournette hasn’t exactly been effective this year, so I anticipate most of the offensive success to be through the air.

Mike Evans has been Tom Brady’s favorite this year and should have easy sledding against the Falcons defense this week. Atlanta is the 3rd worst team against the pass in 2020, and the Bucs are much better passing the ball than they are running it. So, sign me up for the most targeted receiver on a team that throws the ball against a team that can’t stop the pass. Start Mike Evans this week.

My last ‘start’ this week is TY Hilton. TY is coming off of back-to-back-to-back big weeks. He has scored four TDs and tallied nearly 300 receiving yards. This week the Colts are facing off against the Houston Texans, who are tout one of the worst pass defenses in the NFL.

However, Hilton and the Colts did play Houston just two weeks ago, so while Hilton had a big 8/110/1 day against the Texans, there is some risk that the Texans will be more well prepared this time around. While I am a bit cautious about a letdown, I’m starting Hilton this week.

My first ‘sit’ this week is Curtis Samuel. He had a solid game against the Broncos last week, catching 7/9 targets for 68 yards. But, I am looking elsewhere for a fantasy WR this week if I have a viable option. Overall this has been a solid fantasy year for Curtis Samuel, but my apprehension this week is for two main reasons.

First, he is on the injury report with a hamstring injury. All it takes is a small tweak or grab, and he could be done for the day. For a player like Samuel, who relies on speed and quickness to succeed, this type of injury can be especially harmful. The second reason is the Packers have been a solid defense this year and have been even better at home. They have only allowed one opposing QB to eclipse the 250-yard passing mark and have kept two QBs under 200 yards. I don’t like the idea of trusting an injured speedster on the road in the cold. I’ll be sitting Curtis Samuel this week.

My other ‘sit’ for this week is Bronco Tim Patrick. Patrick has been a trendy flex play of late, but I’m avoiding him in my lineups this week if at all possible. Denver played well last week in a win over Carolina, but this week they face off against a much better Bills team and a defense that kept Big Ben under 200 passing yards.

With the recent emergence of KJ Hamler and both Jerry Jeudy and Noah Fant’s presence, I think it’s going to be tough sledding for Patrick’s fantasy production. There’s always a chance for some garbage time scoring here, but I don’t want to be counting on Tim Patrick this week in the playoffs.

That’s it for Week 15, feel free to reach out to me on Twitter (@tristancook_) if you have any specific questions for who I would start. There are also weekly office hours in the Facebook group on Sunday mornings before the early games kick-off. There are a handful of writers that will answer all the questions posted to the thread, so you are usually able to get a few different takes on your situation. Make sure to come back next week to see how these picks turned out. Good luck!