Can you count on rookie WRs with playoff positions on the line? @tristancook_ is here with all the WR start/sit answers in the Slant Pattern! 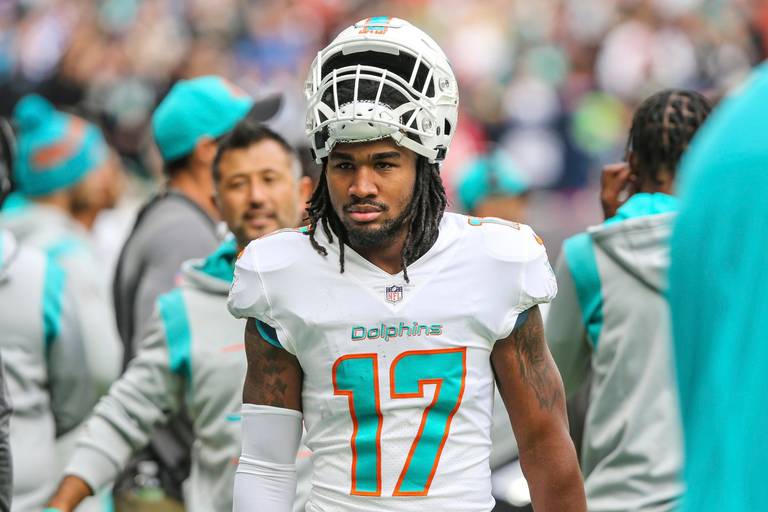 NOTE: Rankings are based on a 12-team PPR league. So, saying WR2 means top 24, or TE1 means top 12, etc., and are from Fantasy Pros consensus expert rankings.

Last week was another good week. I hit on 4 of my 5 calls. I listed Robert Woods as a ‘start,’ but he obviously wouldn’t have been in your lineup since he tore his ACL during the week. My only miss was Emmanuel Sanders as a ‘start’/. He finished as WR48 with 7.1 points. Certainly not the kind of game I was expecting. My only other ‘start’ was Christian Kirk, who finished as WR27, decently above his ranking. My three ‘sits’ were all hits. Jarvis Landry, DJ Moore, and Marvin Jones all finished at WR50 or worse, despite being ranked significantly higher. That brings my last two weeks to 8 hits, 1 miss, and 1 push. Not bad, time to keep it going.

My first ‘start’ for Week 11 is Jaylen Waddle, who has been a bit of a surprise this year. Not that we didn’t think he could be a fantasy producer, but I don’t think anyone expected this. I think we all anticipated Waddle being more of a big play, down the field type of receiver. Instead, Waddle has averaged a mere 6.6 yards/target despite being one of the fastest players in the NFL.

But, despite playing closer to the line of scrimmage, for fantasy, he’s actually been pretty great. He’s sitting at WR24 but is the 8th most targeted WR in the league. This week I think he has an opportunity for a big game. The Jets allow the second-most passing yards in the NFL. Waddle should be a safe start with his heavy target share, but I expect a big day. Get him in your lineup.

My next ‘start’ is another rookie playing in the same game. Elijah Moore has come on strong of late, scoring double-digit fantasy points in his last four games, including 3 TDs in his last two games. This week the Jets face off against Miami, who is also one of the worst pass defenses in the NFL. So, there should be plenty of yards to be had.

The Jets are going with Joe Flacco at QB, which doesn’t really impact Elijah Moore very much for me. He is their best offensive weapon, and I think Flacco is capable of getting him the ball. I’m hoping Moore can get into the endzone against the Dolphins and continue his hot streak.

Having Ja’Marr Chase as a ‘start’ may seem a bit silly. But, since he’s ranked as WR20, I thought he was worthy of putting on my list. Chase is coming off a lackluster performance after looking like an absolute monster for most of the season. I’m not sure why he is ranked so low, but you shouldn’t have any concerns about Chase in your lineup. Start him with confidence.

My final ‘start’ is one that I’ve been championing for a while now. DeVonta Smith is starting to look like the incredible WR that we saw at the collegiate level. He was able to haul in 4 of his 6 targets last week for 66 yards and 2 TDs, including a spectacular contested catch in the corner of the endzone. The Eagles are looking like they’ve finally figured some things out on offense. And, I think it’s no coincidence that it coincided with DeVonta Smith breaking out.

When Jalen Hurts decides to throw the ball, he looks towards DeVonta. Also, it looks like Goedert has a decent chance of missing this game, which just means more targets for Smith. The Eagles face off against the Saints this week, who are one of the poorer pass defenses in the NFL. I’m rolling out Smith once again this week if I have him.

My first ‘sit’ is basically a mainstay at this point, and that is DJ Moore. His fantasy production has shuttered to a halt in the last few weeks. After starting the season on fire, DJ Moore hasn’t reached the double-digit point mark since Week 7. I’m not necessarily panicked long-term for DJ, but I don’t feel good about him at all right now.

It looks like Cam Newton will retake his spot as the starting QB for Carolina, but I’m not willing to put DJ Moore into my lineup until I see it from him for one week first. Additionally, the Cardinals are statistically one of the tougher pass defenses in the NFL, so the likelihood of Moore having a big game is low. He’s been hanging around the WR50 mark lately. I’d be shocked if he gets anywhere near his WR23 ranking for this week.

My final ‘sit’ is Michael Pittman Jr. It’s going to be very tough not to want to put him in your lineup after the impressive four-game stretch he’s been on. But, hear me out. The Bills give up the second-fewest passing yards per game in the NFL. Pittman will be facing off against Tre’Davious White for much of this game. Jonathan Taylor is on a tear of late. And, it’s supposed to be less than ideal weather in Buffalo on Sunday. All of that is a recipe for a letdown. You may not have a better option than Michael Pittman, but if you do, I’d strongly suggest looking their way.

That’s it for Week 11. Feel free to reach out to me on Twitter (@tristancook_) if you have any specific questions for who I would start.