Evans? Julio? Sutton? Which WRs can you trust to bounce back? Can DeVonta do it again? @tristancook_ covers the WR start/sits for Week 2! 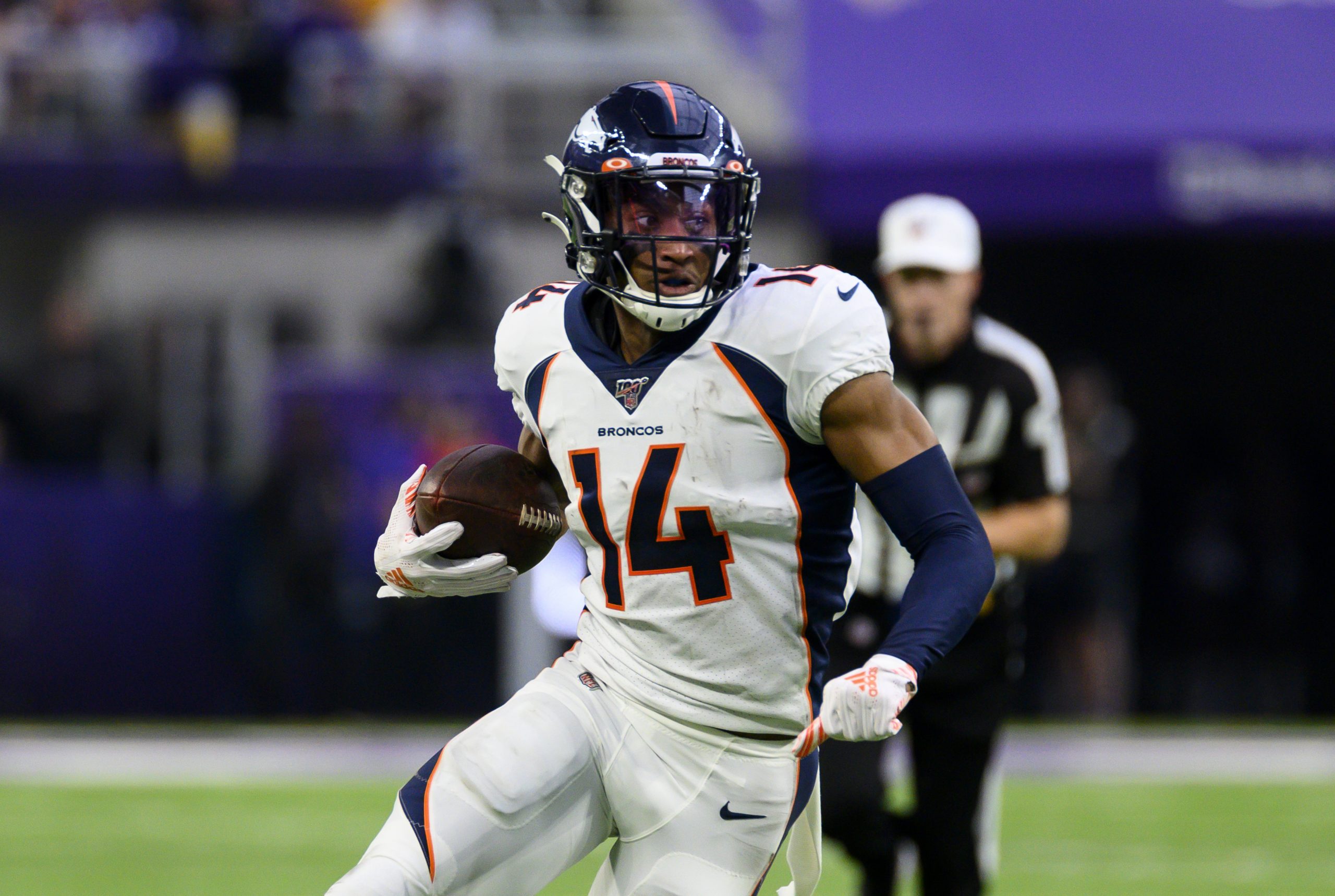 Week 1 was a slightly above average week for my start/sit calls. I hit on both A-Rob and Aiyuk as ‘sits.’ A-Rob finished as WR 62 on the week, and Aiyuk didn’t even see a target. I can’t say I expected that, but the concerns for both players came to fruition. My ‘starts’ weren’t quite as successful. Notably, Sutton had a miserable game and only saw three targets. I expected him to be much more involved. JuJu had eight targets but only hauled in four of them. It was quite disappointing because he could have had a much better day than he did. Shenault finished just below his ranking. I hoped for more from him, but it was certainly an encouraging sign for what we could see. Finally, Lockett was a resounding hit. He finished as WR7 on the week with 2 TDs and over 100 receiving yards. Let’s get to this week’s players.

Antonio Brown is my first ‘start’ of this week. He had a big game last week against the Cowboys, showing flashes of the player we saw on the Steelers. It’s clear that he’s one of Tom Brady’s favorite targets and has a significant role in this offense going forward. But, the reason I am making sure to ‘start’ AB this week goes beyond that.

This week the Bucs take on the lowly Falcons defense that was just torched by Jalen Hurts and an Eagles’ passing attack that isn’t anywhere near as potent as what the Bucs have. Atlanta’s defense gave up a league-worst of nearly 300 passing yards per game last season. And, they don’t look like they are any better yet this year. I feel very confident in Brown this week.

You can probably figure out why I also have Mike Evans listed as a ‘start’ this week. While the reasoning is similar to why I think you should start Brown, it’s not exactly the same. Evans obviously had a rough game against Dallas, only hauling in 3 of his 6 targets for 24 yards. That performance included a couple of passes that he absolutely should have caught. But I’m not concerned about the slow start for Evans.

It will be tough to rely on all three of Tampa’s top pass catchers each week, but this week is one where I think you can. The Falcons can’t really stop anyone through the air, and Brady should look to get Evans going this week. Plus, Evans doesn’t need a ton of targets to be successful. He is always a threat near the goal line, so I still feel quite confident in Evans this week and the rest of the season.

Moving on, Julio Jones is my third ‘start’ of Week 2. He, like the aforementioned Evans, struggled in Week 1. Julio only put up 29 yards on 6 targets. One of those targets was a pass in the end zone that he couldn’t bring in for a TD. It was a disappointing week for Jones because the Cardinals do not have a particularly strong pass defense.

Additionally, the Titans were trailing nearly the entire game. So, it was the type of game script that would lead to a heavy workload for Jones and Tennessee’s passing attack. But that didn’t happen for Julio.

I expect that to change this week. The Titans were off from the start of the game last week, but I expect to see them try to get Henry involved early and use play-action to hit big plays to Julio and AJ Brown. The only team that was worse than the Seahawks last year against the pass was the Falcons. So, while this is a new season, I still think you can throw the ball against Seattle. I’m not worried about Julio.

My fourth ‘start’ for this week is Courtland Sutton. Like the last two ‘starts,’ Sutton significantly disappointed in Week 1. He only caught one pass for 14 yards. But the more frustrating part for me was his three targets. I expected to see him be a much larger part of the Broncos offense. But instead, nearly half of Bridgewater’s passing attempts went to Fant or Jeudy.

So, why the optimism this week? Well, unfortunately for Denver, Jeudy injured his ankle and is going to miss some time. I fully expect to see Teddy Two-Gloves throw the ball to Sutton a lot more this week. He should find success against this Jags defense and finish above his WR 32 ranking. I’m all in on Sutton, especially without Jeudy.

Brandin Cooks is my final ‘start’ for this week. He, and the Texans, surprised a lot of people in Week 1 with their convincing win over the Jaguars. Cooks hauled in 5/7 of his targets for 132 yards, including two deep throws that required spectacular catches. He was easily their best receiving option, and Tyrod Taylor isn’t afraid to throw it up for him in traffic.

Houston led early and never looked back, so it’s a bit hard to predict how things will look for this offense in a negative game script. Unfortunately, that’s exactly what I expect to see for the Texans this week. It’s hard to get too caught up in game script dependency because any team can surprise us. But I do feel rather confident in the Browns in this matchup. The good news is that this should actually help Cooks because Taylor should at least throw the ball as many times as he did last week. I’m trusting Cooks to have another big game this week.

My only ‘sit’ this week is Eagles’ rookie DeVonta Smith. He had a great performance in his first NFL game with a 6/71/1 receiving line on 8 targets. He and Jalen Hurts looked in sync and were quite impressive. But it was also against the Falcons defense, which, as I’ve mentioned a few times, is pretty terrible.

The 49ers defense is significantly better than the Falcons. And, despite allowing a late rally against the Lions, it should provide a much tougher time for Hurts and Co. to move the ball. It’s possible that Smith can take any pass to the house, but I would temper my expectations this week. And, for example, if I have the option, I would much rather play someone like Courtland Sutton over him this week.

That’s it for week 2, feel free to reach out to me on Twitter (@tristancook_) if you have any specific questions for who I would start. There are also weekly office hours in the Facebook group and on Twitter each Sunday morning before the early games kick-off. There are a handful of writers that will answer all the questions posted, so you are usually able to get a few different takes on your situation. Make sure to come back next week to see how these picks turned out. Good luck!

That’s it for Week 2. Feel free to reach out to me on Twitter (@tristancook_) if you have any specific questions for who I would start. There are also weekly office hours in the Facebook group and on Twitter each Sunday morning before the early games kick-off. There are a handful of writers that will answer all the questions posted, so you are usually able to get a few different takes on your situation. Make sure to come back next week to see how these picks turned out. Good luck!